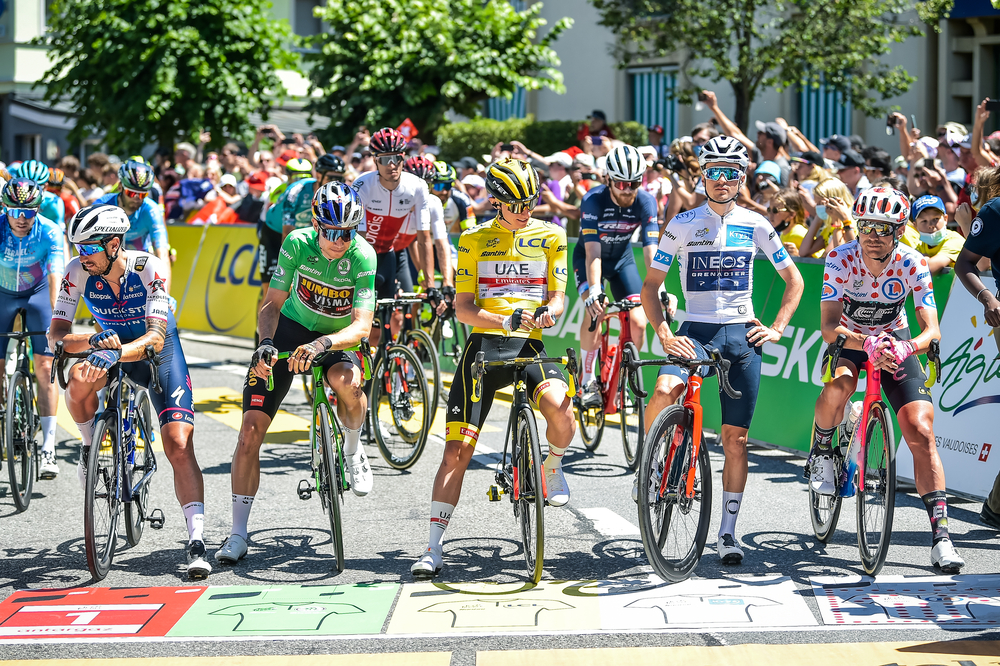 When then-yellow jersey wearer Wout van Aert of Jumbo-Visma hopped into the breakaway on Stage 6, the move set commentators buzzing. The break was small, and likely to be caught, while the stage finish was a profile normally suited to him if he’d stayed in the draft of the pack instead of out front. Plus, he had two overall contenders as teammates to look after, including Primož Roglič, banged up from a crash the day prior. As he simply rode his companions off the wheel but was then caught with 11km to go, what, everyone wondered, was Wout thinking?

At the finish, where he conceded more than seven minutes to fall far out of yellow-jersey contention, van Aert was philosophical. He’d hoped to be in a bigger break, he explained, and when only two others joined, he said, “I thought, ‘I’ll try and enjoy myself, and if it doesn’t work, then it’s a nice way to honour the jersey and my last day in it’.”

But was that really it? Racers are known for being circumspect about their real tactical motivations, but there was a clue: when the break went through the intermediate sprint in Carignan, van Aert was careful to make sure he crossed the line first, to get the maximum 20 points for the green jersey standings, despite none of his breakaway companions being a threat to his lead.

On Stage 7, even with riders up the road, van Aert dutifully led the pack across the line on that day’s intermediate sprint, to pick up the six points left over from the breakaway. On Stage 8, he was similarly watchful, making sure to mop up the intermediate sprint behind the small breakaway (he was beaten only by Alpecin-Deceuninck’s Jasper Philipsen), and then taking his second stage win on a finish that suited him perfectly.

The answer’s there in plain sight: van Aert has openly said for weeks that he is targeting the green jersey competition. While he’s hunting stage wins (checked that box on Stages 4 and now 8) and helping Roglič and Jonas Vingegaard, as he did with superlative effort on Stage 5, the green jersey is his biggest personal objective. The question is who might challenge him. The answer might surprise you.

The points competition in the Tour de France is historically contested among sprinters. Points are awarded at stage finishes, and at spots along each day’s route (except for time trials). While points are awarded on summit finishes, and intermediate sprints can come at any point in a stage, the way the rules are structured weights the points awarded in a way that prioritises sprinting: more for flat stages, less for others.

And van Aert can uncork some straight-line speed. But what’s unusual about van Aert is the breadth of his talent, as he showed in the 2021 Tour where he completed a remarkable trifecta: winning a time trial, a mountain stage, and a sprint stage—the sprint stage, in fact, the prestigious final dash on the Champs-Elysées. There are, simply, almost no other riders like him. And van Aert has a comfortable lead in the green jersey standings. So comfortable, in fact, that his biggest threat likely isn’t another sprinter at all.

If you’re Stage 2 winner Fabio Jakobsen of Quick-Step—Alpha Vinyl, you might be saying, “Wait a minute; what about me?!” Jakobsen is the closest rider to van Aert in the green jersey standings, with 149 points to van Aert’s 284. And he won the points competition at last year’s Vuelta España, notching three stage wins along the way. Unlike van Aert, Jakobsen also has a team that’s dedicated to helping him win those sprints, including arguably the best leadout man the sport has ever had, Michael Mørkøv. On paper, Jakobsen is clearly van Aert’s biggest threat.

But several things stand in Jakobsen’s way. One is the course. It’s thin on true sprint stages, with just five likely bunch finishes and two other days that might end in a field sprint if everything works out right. But most of those chances were in the race’s first week, and van Aert is already positively dusting Jakobsen in the standings. It might not be until Stage 19 that there’s a true field sprint again to suit Jakobsen’s strengths.

Van Aert is also a much better climber, which makes him more suited to hunting the stages until then when he’s not working for Vingegaard. It also advantages him for the intermediate sprints, some of which come deep into the kind of middle-mountain stages that are ideal for van Aert’s stage hunting talents. Simply, the maths is very much in van Aert’s favour. There are a maximum of 640 points yet to be awarded; many of those are out of Jakobsen’s reach, but not van Aert’s.

No other sprinter is within even 150 points of van Aert’s lead. What’s more, after eight stages, his total is likely already half of what he’ll need. Over the last 10 Tours, the eventual green jersey winner amassed, on average, 400 points total. Here’s the rundown:

At 264 points, van Aert is comfortably on or even ahead of schedule compared to the past ten winners; on only two occasions did riders have a higher total at this point in the race, and both times his name was Peter Sagan. His success underlines why 2022 is shaping up to be van Aert’s year. Sagan amassed seven green jersey titles on the back of a “mere” 12 stage wins. Rather, his strength was building an insurmountable lead in the first half of the race via high overall finishes. In 2018, for example, Sagan finished in the top 10 on each of the first nine stages. Van Aert is on a similar trajectory, finishing first or second on five of the eight stages so far, plus getting those smart intermediate points pickups on Stages 6 and 8.

So who can challenge van Aert for green? The answer is none other than the race leader, Tadej Pogačar of UAE-Team Emirates, who is third in the points standings, with 128. Pogačar neutralises many of van Aert’s advantages simply because he’s one of the few who are van Aert’s equal or better on a given day. He’s also finished in the top 10 on five of eight stages so far, including two stage wins.

What’s more, Pogačar is just getting started, with the race soon to enter his favourite terrain of the high mountains. He has 39 seconds on his nearest challenger for the overall, van Aert’s teammate Vingegaard. He wants to add to that. And, as he showed the last three days, he’s clearly hunting the time bonuses on offer for the first three riders across the finish line of every stage except the Stage 20 time trial. He’ll likely get at least one more stage win, and very possibly two or more.

What’s not in Pogačar’s favour is that he doesn’t honestly care that much about the points competition. If he’s doing well in the green jersey standings, it’s mostly because his primary objective, yellow in Paris, is going perfectly right now. But as Pogačar has shown in several instances last year and on Stages 6 and 7 this year, he’s aggressive and doesn’t give gifts.

Paradoxically, the bigger the fight Vingegaard gives Pogačar for yellow, the worse that is for van Aert’s green jersey prospects. For one thing, if Vingegaard hangs tough, it will further incentivise Pogačar for those stage-win bonus seconds (which will also yield points). And if Vingegaard manages to stay close to Pogačar on overall time, the more van Aert will see his objectives downranked in the team in favour of having him work for a yellow jersey contender, Jumbo’s top goal.

Pogačar is also chasing history of a sort. In both his previous wins, he took not only yellow, but the polka-dot jersey for the King of the Mountains competition and the white jersey of best young (under 25) rider. Not since 1969 has a rider swept the Tour’s jersey competitions, when Eddy Merckx—the best male road racer ever—took yellow, green, and the polka-dot jersey for best climber in his first Tour. (The white jersey competition didn’t exist then, but Merckx, just 24 that year, would have won it.) So if Pogačar was somehow to sweep all four categories, he’d be both the first rider ever to do it and the first since Merckx—the man to whom he is increasingly compared—to take every available jersey in the race.

Van Aert, of course, would like to prevent both outcomes, and bring home green on his shoulders and yellow on Vingegaard’s. The Tour is long. There are 13 stages yet to come: many high mountains, treacherous descents, hot days, and of course the threat of COVID-forced DNFs, a topic that was on all lips at the start in Denmark but has faded from view, if not from possibility. It’s not a cliché to say that anything can happen before Paris. But with all eyes focused on the yellow jersey fight, van Aert v. Pogačar for green, a battle between the sport’s two most electric stars, might be the best race within the race.