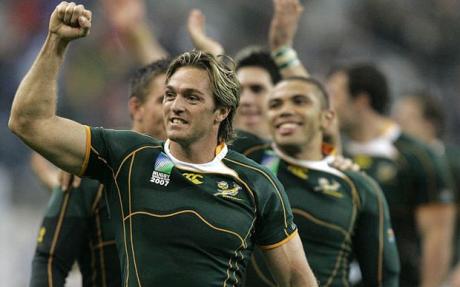 Percy Montgomery has won the World Cup but he will always be unique to Springbok rugby as the first to play 100 Tests. It remains a remarkable achievement for him and one that can never be overstated, writes Mark Keohane.

Montgomery played 50 Tests for the Boks, then played overseas in Wales at a time when only SA-based players were eligible for Test selection and three years later returned to play a further 52 Tests, which included winning a Tri-Nations, a World Cup and beating the All Blacks in New Zealand in 2008, 10 years after he had kicked two penalties and a conversion in the Boks’ 13-3 win against the All Blacks in Wellington, New Zealand, in 1998.

I have always felt Springbok players are valued only while they are with the national team. Too many are too easily forgotten and time, conveniently, dulls the senses of those who purport to know the game.

It is essential that the storytelling never stops when it comes to those Springbok individuals who have achieved so much for South Africa and given South African rugby supporters so many memories.

The Springboks have won the World Cup three times, in 1995, 2007 and 2019, but there has never been a night of champions, in which all three playing and coaching squads are in the same room. It is something for investors of Springbok rugby to consider.

Equally, the Springbok centurions, starting with Montgomery who crossed the line first.

The former fullback attended SACS in Newlands, Cape Town. SACS, before World War II, produced the most Springboks and in the professional era Montgomery’s rugby achievements have no equal among the
host of former SACS rugby-playing old boys.

Ben Duff was the first name read out in the first Springbok team. He was from SACS (then SAC) and it was poignant that the first to get to 100 would also come from the oldest school in South Africa.

Montgomery, when he played the All Blacks at Newlands in 2008, was the history-maker, and in the decade that followed, South Africa’s Springbok centurion club would extend to John Smit, Victor Matfield, Bryan Habana, Jean de Villiers and Tendai Mtawarira.

Eben Etzebeth, who went to school at Tygerberg High in the northern suburbs of Cape Town, in the course of this season, will become the seventh member of this exclusive club. It is an achievement that demands a standing ovation.

Every one of the seven players have consistently excelled and each one of them is a World Cup winner, with Montgomery, Smit, Matfield, Habana and De Villiers from the class of 2007 and Mtawarira from 2019. Etzebeth, when he gets there, will also represent the 2019 winners.

So many brilliant Springboks have never made it to 100 Tests, which is just another reminder of the sacrifice and longevity it has taken for the handful who have got there.

Etzebeth has flourished as a Springbok and as his journey to 100 is celebrated, those pioneers of the centurion’s club who went before him must never be forgotten.