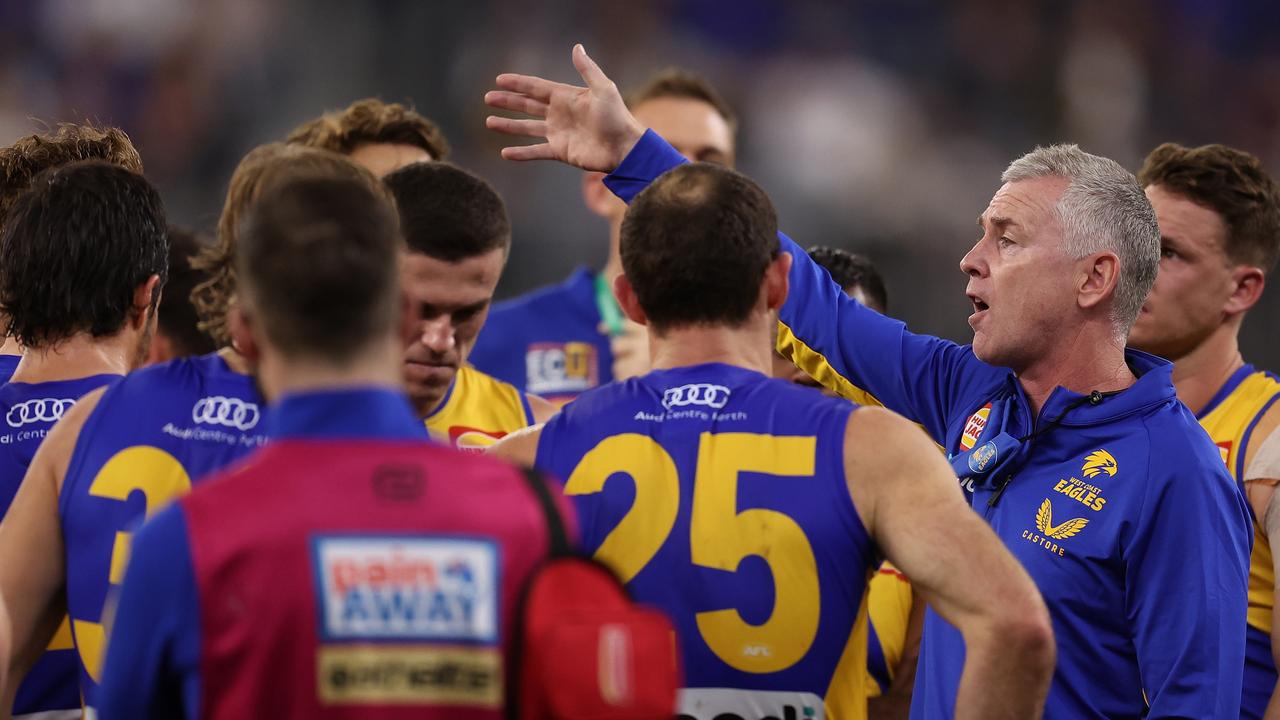 West Coast ought to droop the seven gamers caught up within the nightclub investigation, whatever the membership’s dire record scenario, and cop a “220-point hiding” from Melbourne in consequence.

Jackson Nelson, Josh Rotham, Jake Waterman, Hugh Dixon, Patrick Naish, Campbell Chesser and Rhett Bazzo had been on Monday slapped with $5000 fines – with $2500 suspended, for defying membership orders to keep away from high-risk environments like nightclubs on their days off.

Given West Coast’s record is already decimated by damage and Covid protocols, three of these gamers lined up towards Brisbane final weekend – regardless of the membership issuing robust statements condemning their actions.

Fox Footy’s Gerard Whateley stated the gamers confirmed “outright recalcitrance” and urged West Coast to stay to their membership requirements and drop the gamers to face Melbourne on Sunday.

“It wasn’t thoughtless ignorance, there was an element of wilful disobedience, but I’m not sure that even does it justice,” he stated on AFL360.

“It make me wonder if the players fully buy in to the circumstance that have afflicted their club over this period of time.

“They should just play short suited against Melbourne for the message it sends to their standards and their culture.

“I understand the preservation aspect to it, but I’d cop the 220-point hiding.”

Despite the penalty described by Nick Riewoldt as gamers getting “hit with a wet paper towel”, the AFLPA immediately condemned West Coast’s actions, claiming gamers had already sacrificed a lot of their private lives in recent times.

But AFL commentators had been fast to close down the AFLPA’s issues, with Whateley claiming their issues had been “bewildering”.

“In this sporting environment, their employees have an obligation to the club and to each other and it’s that sort of short-term sacrifice in sport, the setting of a collective goal that allows you to have the career you dream of. And when you fail in such an obvious way, the club has to have a measure to be able to punish,” he stated.

“I just can’t fathom where the PA is coming from.

“In this very specific case, and its only a short period of time they have to endure this, but these players didn’t meet the standards.”

“The PA should have actually put out a press release to say we fully support West Coast’s decision for doing this because these players have brought disrepute onto the playing group,” AFL360 co-host Mark Robinson added.

Robinson described the gamers’ actions as “stupid” and stated they knew there was a component of threat concerned – however partied regardless.

“Players think, ‘we’ll go to a nightclub, we wont get caught, rah rah rah’. Photos and social media got them from a football perspective. The coach and administration had said to the guys, ‘We are in dire straits here. We ask you to respect each other, respect the protocols’ and they said, ‘nah you’re not really talking to us, we’re going out’.

“You know the problem with players, and I like players a lot … the great fight players have got is always to think that they are not entitled people. Get all your money, you deserve it for what you do … but don’t act entitled and don’t turn around and say ‘you can’t fine us for going to a nightclub’.”

Journalist Jon Ralph stated gamers like Patrick Naish, who together with Hugh Dixon solely arrived at West Coast within the SSP interval weeks earlier than Round 1 as a second AFL probability, wanted to shift their focus from partying to their profession.

“I just think if you’re Patrick Naish, your career is so perilous and you’re out at a nightclub when you should be out trying to find yourself in the best 22 and get yourself a multi-year contract,” he stated.