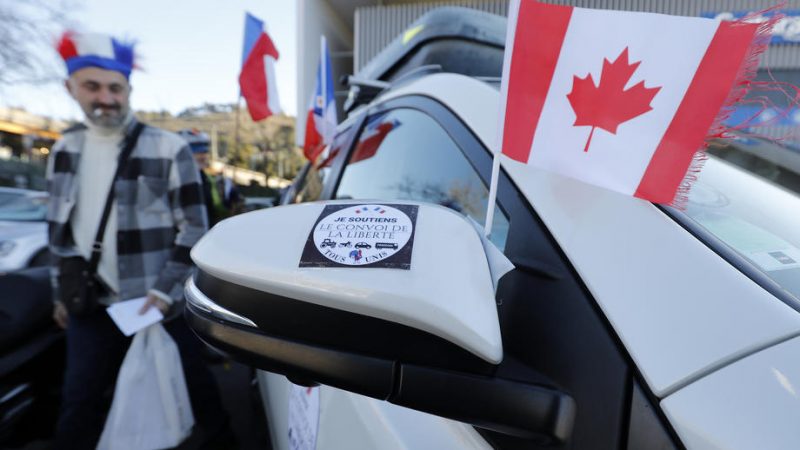 Protesters set out from southern France on Wednesday (9 February) in what they call a “freedom convoy” that will converge on Paris and Brussels to demand an end to COVID-19 restrictions, inspired by demonstrators who have blocked a Canadian border crossing.

About 200 protesters assembled in a parking lot in Nice, on France’s Mediterranean coast, with many displaying Canadian flags in a nod to the truckers in Canada who are protesting their government’s COVID-19 restrictions.

The protesters in Nice said they planned to head first to Paris, then on to Brussels – headquarters of the European Union – to demand, among other things, the scrapping of rules barring people from public venues if they do not have a COVID-19 vaccination.

“Lots of people don’t understand why a vaccine pass is in force in France,” said one man who was helping coordinate the convoy from Nice and who gave his name as Denis.

“Our work is to communicate to Europe that putting in place a health pass until 2023 is something the majority of our fellow citizens cannot understand,” Denis said.

Not all of the people setting out from Nice planned to travel all the way to Paris or Brussels. The convoy was made up of motorcycles and private cars, but no trucks.

In the city of Perpignan, near France’s border with Spain, around 200 people gathered to set off towards Paris as part of the “freedom convoy” movement.

Their convoy was made up of cars, some camper vans, and one heavy-goods vehicle.

“We are just tired of it all. We want to go where we want without being asked for a vaccine pass. At least with this action, I am doing something,” said Nicolas Bourrat, an independent truck driver as he was about to hit the road.

Copycat protests have also sprung up in Australia and New Zealand, while truckers in the United States have said they are planning similar demonstrations.

How did the protests start?

COVID-19 vaccine mandates for cross-border truck drivers, imposed in January by Canada and the United States, angered some drivers. They started the “Freedom Convoy” of trucks driving across Canada to Ottawa late in the month. The Canadian Trucking Alliance, an industry group, said it opposes protests on public roadways, however, emphasizing that most Canadian truckers are vaccinated. The protests have broadened to oppose restrictions more generally against unvaccinated people, although provincial governments control these, not the federal government.

Prime Minister Justin Trudeau has refused to meet with protest organizers and moved to an undisclosed location outside Ottawa as the convoy arrived. He has since returned to Ottawa and said following public health measures is the best way to fight the pandemic.

The protests may have contributed to the opposition Conservative Party’s ousting of leader Erin O’Toole, who angered some Conservative legislators for initially distancing himself from the protests.

Canadian authorities are scrambling to end the Ottawa occupation, hoping a combination of criminal charges, traffic tickets and the prospect of losing access to fuel will end the blockades.

A court granted an interim injunction this week preventing people from sounding horns in downtown Ottawa.

Protesters say they are peaceful but some waved Confederate flags and swastikas in the occupation’s early days. Some Ottawa residents say they were harassed.

Police have generally avoided mass arrests and aggressive efforts to clear blockades, and Alberta police said they were unable to find local tow-truck operators willing to assist them.

What do Canadians think about the protests?

A recent poll found 62% of Canadians surveyed oppose the “Freedom Convoy.” Canadians have largely followed government’s health measures and nearly 79% of the eligible population has taken two doses of the vaccine.

But sentiment ranges widely, as it does about government response to COVID-19 itself. Some Canadians support the protests, saying they are tired of government over-reach, while others are alarmed that police have been unwilling or unable to end unlawful blockades.