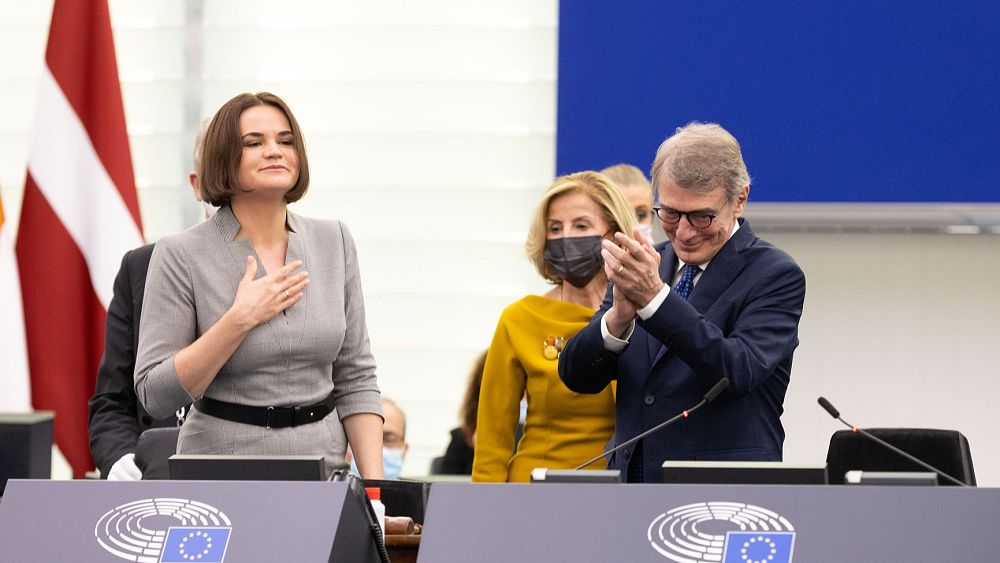 As the European Union gears up to slap Belarus with a new raft of sanctions in response to the ongoing crisis at the bloc”s eastern borders, Sviatlana Tsikhanouskaya has a suggestion: don’t follow the money, follow your values.

“There are still a lot of businesses around Europe that are cooperating with the regime. Don’t be ruled in your policy by money, be ruled by values,” the exiled Belarusian opposition leader told Euronews in an interview recorded in the European Parliament in Strasbourg.

“If you stop cooperation for a couple of months, but if you do this together, jointly, simultaneously, it will deprive the regime of money. And this will be the fast end.”

The EU is Belarus’ second main trade partner, right behind Russia, representing almost 20% of the country’s overall trade in goods, according to the European Commission.

“When we are talking about sanctions, [it should be] very strict economic sanctions on the regime, not just step by step, having a gap of six months between sanctions, when the regime is getting used to [them]. They create new organisations to avoid sanctions. Just fast, immediate decisions will, for sure, brings us to the changes.”

The fourth raft of EU sanctions was imposed in late June, increasing the total blacklist to 166 persons, including members of Lukashenko’s family, and 15 entities. Now the bloc is preparing a fifth package to punish more individuals, economic sectors and companies, such as state-owned airline Belavia, which many consider an enabler of the recent border crisis.

Brussels accuses Belarus of luring migrants from the Middle East and African countries with flights headed to Minsk. Once there, officials send asylum seekers towards the borders with Poland, Lithuania and Latvia. The scheme has resulted in thousands of people being left stranded between the EU and Belarus with nowhere to go and concerns of an increasingly dire humanitarian crisis.

Lukashenko has denied inviting migrants but he recently told the BBC that it is “absolutely possible” his troops helped them cross into Poland.

“Lukashenko and his regime don’t need these people. He wanted to use them. He didn’t expect that his blackmail wouldn’t work. So he is cornered as well,” Tsikhanouskaya said.

“Humanitarian mission has to be sent. And this is the time when I’m sure the regime will accept this because he also wants to solve this problem. But he doesn’t have money for this.”

The opposition leader welcomed the phone call between Lukashenko and German Chancellor Angela Merkel, which took many observers by surprise given that European leaders have refused any direct contact with Minsk authorities since the contested 2020 presidential elections.

“We know about this phone call,” Tsikhanouskaya said. “It looks rather strange because, for more than one year, we kept this unified position, no communication with the illegitimate [government]. But she did, [she] did this only for humanitarian aid. It helped wonderfully.

“I think that people in Belarus are mostly afraid to be betrayed,” she added. “But still, I understand that this step was made only to help people at the borders.”

Josep Borrell, the EU’s high representative, has also been in touch with his counterpart, Belarusian Foreign Affairs Minister Vladimir Makei, to discuss the repatriation and reallocation of asylum seekers in cooperation with the United Nations and the Red Cross.

In Tsikhanouskaya’s view, the border crisis has been deliberately instigated by Lukashenko to “shift focus from internal problems” and to then “split Europe” by exploiting the politically sensitive question of migration.

She says the only way to solve the current situation and prevent similar episodes in the future is to remove Lukashenko from power and dismantle his whole state apparatus.

“This crisis, and many others that hypothetically could arise, will not be solved without dismantling the regime,” Tsikhanouskaya said.

“We have to look at the core of the problem. We have to keep consistency in sanctions and policy in assisting the Belarusian people. Be braver, the same as Belarusian people are. Don’t be afraid to take strong decisions because it is high time for them.”

Watch the interview in the video player above.