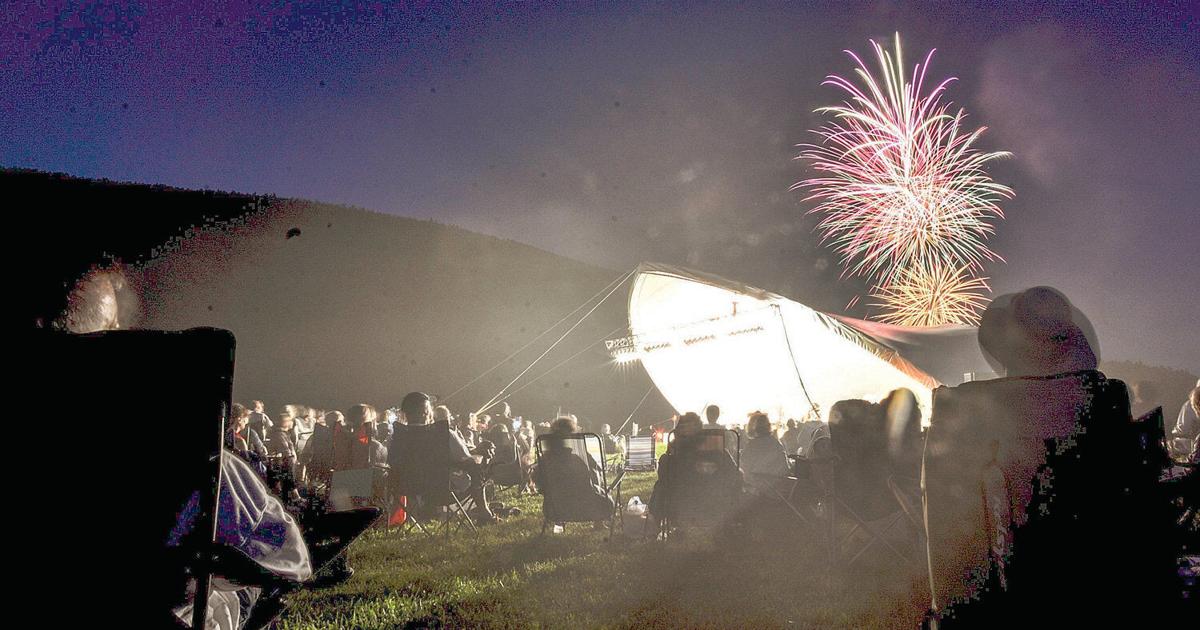 GRAFTON — Vermont Symphony Orchestra’s Summer Festival Tour has a lot to like.

“Its a mix of a full orchestra playing music that quite often, people know, but in a relaxing atmosphere with your kids running around and your picnics,” said Elise Brunelle, executive director of Vermont Symphony Orchestra. “We’re so happy to bring it back after quite a few years.”

When planning for the festival’s return since COVID-19, prices for everything were rising. Fireworks would be four times more expensive than before, Brunelle said. The orchestra could not cover the cost. The Grafton community raised money, making it the only community with fireworks on the tour.

“It’s something I really wish we could have brought back to all the venues but I’m thrilled that Grafton, that the people in and around the southern part of the state, pulled together and came up with the funding for that,” she said. “And we will hope that next year, in a year from now, things will be back a little bit closer to normal and it will be part of every performance.”

Other stops on the tour are getting “a smaller, localized light show,” Brunelle said.

“Celebrate!” is this year’s program, and it will feature music from “West Side Story,” John Philip Sousa marches, the William Tell Overture, and songs by John Williams and Aaron Copland. The orchestra will be conducted by Julian Pellicano, and Vermont Symphony Orchestra’s Principal Trombonist Matthew Wright is the soloist.

Tickets for the Grafton show at Grafton Ponds at 7:30 p.m. Sunday are available at MKT in Grafton and can also be purchased online at flynnvt.org. They cost $26 in advance and $35 at the gate. Children ages 6 to 17 are $5 and children younger than 5 are free.

Tickets for the Manchester show at Hunter Park at 7:30 p.m. Saturday can be purchased for the same price at flynnvt.org. The tour also stops at South Pomfret on Friday, Shelburne on Monday, East Burke on July 9 and Stowe on July 10.

Pellicano is one of seven candidates for Vermont Symphony Orchestra music director. He’ll be conducting the six concerts for the statewide summer tour.

The last candidate will be conducting music with Vermont Symphony Orchestra in early February, then Brunelle expects the new music director will join her group in fall 2023. She’s part of a search committee, which includes several orchestra members, board members and members of the artistic community.

“We all come together and assess them,” she said. “We ask our audiences to take surveys about what they thought about the experience with the conductor.”

Pellicano said the concert celebrates the birth of the nation and the orchestra bringing the tour back after two summers off due to COVID.

“I think that the audience will find the music quite celebratory,” he said. “It’s mostly American composers and just really a wonderful variety of music that attempts to cast a wide net into the landscape of American music over the past 70 years.”

Selecting the pieces for the outdoor setting was important for Pellicano.

“It’s a concert that has a relaxed atmosphere and it’s going to be a lot of fun,” he said.

“There are not that many orchestras that have it in their mission to connect with audiences over such a wide land area,” he said. “And that’s something that I’ve done a lot of in my positions and Winnipeg.”

For the past nine seasons, Pellicano has served as associate conductor with Winnipeg Symphony Orchestra in Canada. He said he really likes “the idea and process of connecting with audiences and many different people in different locations, different towns, different circumstances, situations. And that’s something that the Vermont Symphony Orchestra does so well and has been doing for their entire history.”