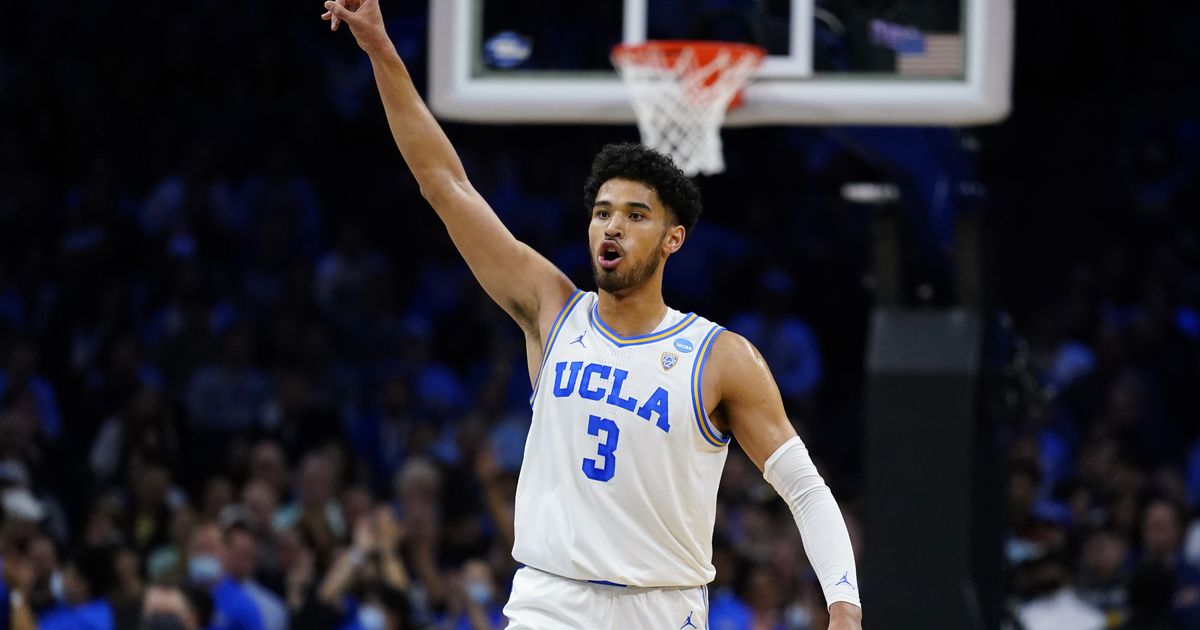 Despite speculation that the team might trade one of its stars or rotation pieces away, or at least purchase a pick in the second round, the front office stands pat aside from two minor moves.

UCLA’s Johnny Juzang reacts during the first half of a college basketball game against North Carolina in the Sweet 16 round of the NCAA tournament, Friday, March 25, 2022, in Philadelphia. (AP Photo/Matt Rourke)

As Thursday night’s NBA draft approached, there was exponentially-growing curiosity about whether the Utah Jazz would use the often-freewheeling affair to make some sort of seismic move.

Turns out, there was only a hint of a tremor.

Rudy Gobert, Donovan Mitchell, Bojan Bogdanovic, Mike Conley, Royce O’Neale, and Jordan Clarkson are all still on the roster for now. No draft picks were acquired or made.

And so, the only difference with the team at the moment is the addition of UCLA guard Johnny Juzang, who — after going undrafted — agreed to a two-way contract with the team, per a report from ESPN’s Adrian Wojnarowski. Two-way deals allow players to split time between NBA clubs and their G League affiliates.

UCLA’s Johnny Juzang has agreed to a two-way contract with the Utah Jazz, source tells ESPN.

The Jazz also signed Illinois center Kofi Cockburn to an Exhibit 10 contract, per a report from ESPN’s Jonathan Givony. An Exhibit 10 deal is a non-guaranteed deal that essentially amounts to a training camp invite, and which allows the player to earn a $50,000 bonus if, when cut by the NBA team, they subsequently sign with the G League affiliate and remain on the roster for at least 60 days.

Illinois’ Kofi Cockburn has agreed to a deal with the Utah Jazz, a source tells ESPN.

Thursday’s lack of a big move isn’t to say that CEO Danny Ainge and general manager Justin Zanik won’t yet shake up the make-up of a team coming off back-to-back early playoff exits, but at least on draft night, the team’s front-office braintrust didn’t see a substantive deal worth making.

That extended to getting involved in the draft itself. Utah was one of three teams that did not have a pick in either the first or second round, along with the Brooklyn Nets and Phoenix Suns. (The Los Angeles Lakers entered the day without one, but purchased the No. 35 pick from the Orlando Magic early in the day.)

There had been a few rumors that the team would try to move one of its rotation pieces for a first-round pick, or, more simply, consider buying a second-round pick. Jazz owner Ryan Smith said on Tuesday in the aftermath of a promotional event for UFC 278 at Vivint Arena that he was amenable to spending the money to acquire such a pick if the front office asked it.

That didn’t wind up happening, which is perhaps not a huge surprise, considering the team dramatically de-emphasized its annual predraft process this season. In past years, the team has hosted more than a hundred prospects in various workouts. This year, it brought in a few dozen, only a few of whom wound up hearing their names called.

Juzang was among the initial six players the Jazz had in for predraft workouts. The 6-foot-5, 209-pound guard with a 6-11 wingspan spent his freshman season at Kentucky, but burst onto the national scene as a sophomore during UCLA’s run through the NCAA Tournament.

That season, he averaged 16.0 points, 4.1 rebounds and 1.6 assists in 32.1 minutes, and made the All-Pac-12 Second Team. He then led UCLA on a Cinderella run through March Madness, as the Bruins went from the First Four to the Final Four. Along the way, he scored 23 points vs. Michigan State, 27 in an upset of BYU, 28 against Michigan, and 29 in UCLA’s near-upset of No. 1-seeded Gonzaga.

In UCLA’s six tourney games, he averaged 22.8 points on 50.9% shooting. He might have been a first-round pick had he stayed in the 2021 drat, however, he subsequently decided to return to school for his junior season.

Juzang would average 15.6 points, 4.7 rebounds and 1.8 assists in 31.7 minutes, and make the All-Pac-12 First Team, but scouts reportedly came away underwhelmed with his lack of progress. He shot just 43.2% from the field and 36.0% from 3-point range this past season.

Illinois’s Kofi Cockburn (21) tries to get around Chattanooga’s Josh Ayeni, right, during the first half of a college basketball game in the first round of the NCAA tournament, Friday, March 18, 2022, in Pittsburgh. (AP Photo/Keith Srakocic)

As for the draft itself, there were at least a few fireworks in the early going, starting right at No. 1.

The Magic had been widely expected to select smooth-shooting Auburn forward Jabari Smith, but hoodwinked the entire league — including the NBA’s information merchants — by instead taking Duke big man Paolo Banchero.

The Thunder, on the other hand, held to prognostications and took Gonzaga’s wispy 7-footer, Chet Holmgren, while the Rockets were the beneficiaries of Smith’s slight slide, and took him third.

The fourth pick, held by Sacramento, was thought to be available for a trade, but if not, Purdue guard Jaden Ivey was widely considered the favorite to go there. The Kings instead went for filling a need by selecting Iowa forward Keegan Murray, and the Detroit Pistons happily nabbed Ivey at No. 5.

Still, anyone hoping for the type of massive deals that shake up the league undoubtedly came away disappointed.

There were a few trades along the way, but mostly they involved picks in the teens and 20s changing hands. A handful of NBA players were relocated in related deals, but they were primarily salary-shedding moves involving the likes of non-headliners such as Kemba Walker going to Detroit, while Danny Green and De’Anthony Melton traded places in Philly and Memphis, respectively, along with the No. 23 selection.