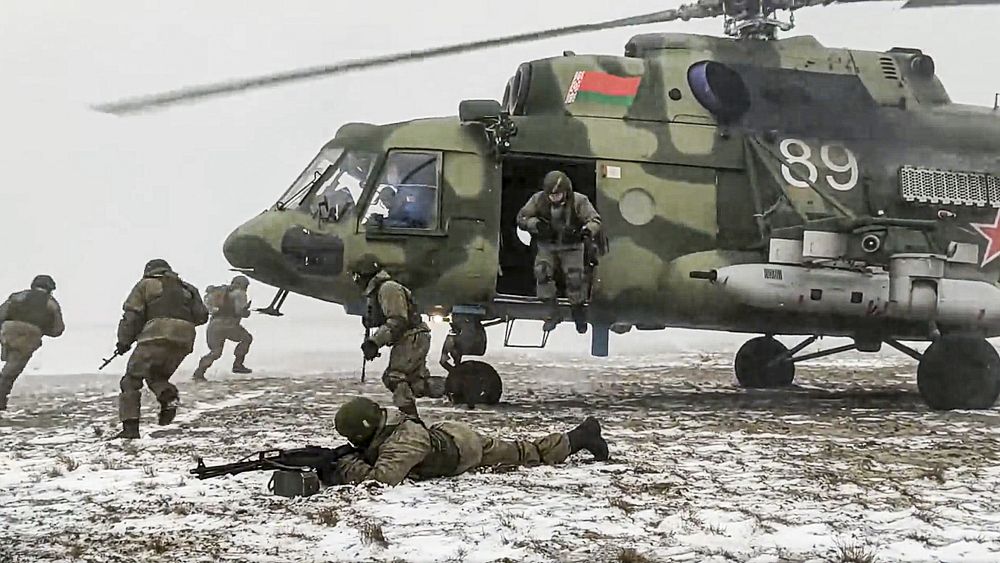 Diplomatic moves to ease tensions over Ukraine are scheduled to intensify on Thursday — but so too are military manoeuvres on both sides amid the biggest security crisis between Russia and the West since the Cold War.

The Russian and Belarusian armies have begun joint military exercises in Belarus, the defence ministry in Moscow said in a statement (in Russian).

“The purpose of the exercise is to work on methods to stop and repel external aggression within the framework of a defensive operation,” it said.

Neither country has specified the resources involved in the drills, but the West has claimed that 30,000 Russian troops have been deployed to Belarus to take part.

Meanwhile the Pentagon is confirming that US troops are in Poland in preparation for further conflict between Ukraine and Russia.

Also on Thursday, foreign policy advisers from Germany, France, Russia and Ukraine will meet in Berlin in the “Normandy format” to see if it’s possible to revive peace efforts, Chancellor Scholz’s office said.

The UK is ready to deploy an extra 1,000 soldiers in the event of a “humanitarian crisis” linked to the tensions in Ukraine, Prime Minister Boris Johnson said on Wednesday, ahead of a planned visit to see NATO allies in Brussels and Warsaw.

The joint Russian-Belarusian drills, labelled Union Courage-2020, are due to last 10 days.

“We have continued to see even over the last 24 hours additional capabilities flow from elsewhere in Russia to that border with Ukraine and in Belarus,” he said, referring to the presence of the Russian defence chief in Belarus.

“The numbers continue to grow. We maintain that he’s north of 100,000, for sure, and he continues to add to that capability. We also see indications that additional battalion tactical groups are on their way,” Kirby added.

Russia and Belarus carried out drills involving paratroopers and air patrols ahead of the exercises.

Moscow has moved troops from Siberia and the Far East to Belarus for the joint drills, and says it has dispatched six large landing craft to the Black Sea region.

The Russian troop deployment to Belarus raised concerns in the West that Moscow could stage an attack on Ukraine from the north, but Moscow has denied it’s planning an invasion.

The Ukrainian capital is just 75 kilometres from the border with Belarus.

The US has sent extra soldiers to Poland and Romania while Germany has bolstered troop numbers in Lithuania — NATO troops are already stationed in Estonia, Latvia and Lithuania as well as Poland.

Washington has begun to move the 2nd Cavalry Regiment’s stryker squadron from Vilseck, Germany, to Romania, which borders Ukraine. US officials have said they would send about 1,000 NATO troops.

About 1,700 US soldiers from the 82nd Airborne Division are going to Poland and about half have now arrived, with more expected to flow in during the coming days, the Pentagon’s John Kirby said, adding that the US was trying to achieve “a de-escalation of the tensions and a diplomatic path forward”.

NATO does not plan to send troops to Ukraine, but is bolstering defences from the Baltic states, down around Ukraine’s western border and into the Black Sea region in Bulgaria. The 30-nation military alliance is also mulling whether to set up a longer-term military presence in Hungary and Slovakia.

Hungary’s Foreign Minister Péter Szijjártó told Euronews on Wednesday that his country will not accept further NATO troops on its soil as part of manoeuvres over the Ukraine crisis, as the Hungarian armed forces were enough “to guarantee the security of the country”.

“Russia has a choice here. We strongly encourage them to engage, de-escalate and choose the path of diplomacy,” Truss said before her departure, the first visit to Moscow by the UK’s top envoy in more than four years.

The foreign secretary is due to meet her Russian counterpart Sergei Lavrov during the two-day visit, while the two countries’ defence ministers are also present.

On Wednesday, Spanish Foreign Minister José Manuel Albares visited Kyiv to meet with his Ukrainian counterpart, Dmytro Kuleba. Albares urged dialogue and de-escalation, while Kuleba called for more sanctions against Russia and said “there is a chance to resolve the crisis through diplomatic means”.

France’s President Macron spoke by phone on Wednesday with US President Joe Biden to brief him on his meetings in Moscow and Kyiv, the White House said.

Macron held over five hours of talks Monday with President Vladimir Putin in Moscow before meeting with Ukrainian President Volodymyr Zelenskyy in Kyiv the next day.

Macron said Putin told him he would not initiate an escalation, but also acknowledged that it will take time to find a diplomatic solution. He later flew to Berlin to meet with German Chancellor Olaf Scholz and Polish President Andrzej Duda.