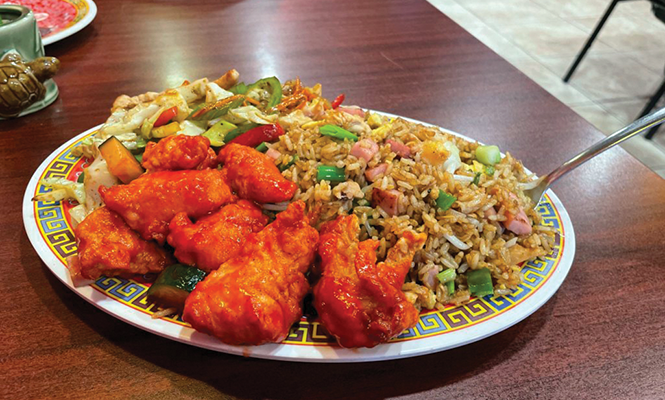 Chinese food was one of the major takeout pillars that my family drew upon when nobody felt like cooking. Chow mein—although it was something that we should have been calling lo mein—ham fried rice, sweet and sour chicken and egg rolls with hot mustard were all gleefully consumed by my family on a fairly regular basis. It wasn’t until I was much older that I understood the chasm between the Chinese food of my youth and the traditional Chinese cuisine that inspired it, and now I’m once again expanding my perspective on these versatile dishes.

This culinary paradigm shift happened during a visit to Chang’s Food (3576 S. Redwood Road, 801-883-9468), a West Valley restaurant that serves up Chinese cuisine with a Venezuelan flair. Just like American food culture caused the cuisine of Chinese immigrants to become the fusion of cultures we enjoy today, Chinese restaurant owners in Venezuela were heavily influenced by the local flavor. This nuanced fusion of two flavor-forward cuisines has resulted in something familiar yet different for those of us who grew up eating Chinese food in America. It’s something that owners Johnson and Jimmy Chang have aimed to replicate with Chang’s Food—their menu is packed with the Chinese favorites they grew up with in Venezuela.

Upon entering Chang’s Food, you quickly realize it has that metaphysical quality that takes you from the strip mall into a rich, vibrant space. The deep red walls with gold accents evoke the traditional Chinese-American restaurants that made us fall in love with sweet-and-sour sauce as kids, and the salsa music that plays from one of Chang’s flatscreens merges the experience with Venezuelan vibes.

The Chinese/Venezuelan combo that diners can observe from their tables is the best way to describe the bounteous plate of food that arrived at my table. The food at Chang’s is traditionally served family style, but solo diners should inquire about any combination plates ($15.99) that are available; it prevented me from getting three gigantic entrees for myself. I felt that a combination of fried rice with ham ($8.99), the chopsuey with chicken ($8.99) and the bittersweet chicken ($11.99) would be the best way to triangulate the full Chang’s experience. Like the restaurant in which I was dining, the dishes looked very familiar—golden fried rice tossed with cubes of grilled ham and sliced scallions, a pile of chopped cabbage and chicken slathered in a thick, gravy-like sauce and generous chunks of lightly fried chicken coated with a bright red sweet and sour sauce.

Based on the appearance of the food in front of me, I was expecting to be taken right back to all those Chinese takeout meals I had previously enjoyed. That’s when the Venezuelan salsa music starts to kick in. You can’t have rice in a Venezuelan restaurant and not notice some subtle differences, and it’s those differences that make their fried rice stand out. Again, the basic rhythm of this dish is something familiar and comforting, but there are these unexpected spikes of peppery flavor that happily burst with each bite.

Since chopsuey was initially conceived as an everything-but-the-sink approach to dealing with leftovers, this is the dish that feels a bit more aligned with the stir fry that I was used to—which is not a bad thing. The addition of grilled green and red bell peppers infuses this dish with some Latin perspective, once again taking your mouth on a trip between worlds.

The bittersweet chicken was perhaps the most surprising variation on traditional Chinese takeout. The sweet-and-sour sauce is infused directly into the batter itself, which gives it that cinnamon-bear crimson color when it arrives, but the sweet-and-sour flavor is much more evenly distributed. Those whose nostalgia for Chinese takeout is predicated on that bright red condiment will be pleased to know that each table at Chang’s comes equipped with a pancake syrup pitcher full of the stuff. There’s no shame in pouring a liberal helping all over your food once it arrives.

For those who want their Chinese-Venezuelan meal punctuated by a bit of dessert, Chang’s serves blocks of tres leches cake ($3.99) that will happily knock that sweet tooth right out for you. Chasing a meal of Chinese takeout with tres leches cake is something I would never have considered on my own, but it works. The soft, spongy cake is a great way to wrap up a meal at Chang’s.

Like the restaurant itself, Chang’s food represents a harmony between two cuisines, and it’s fun to have our perspective of food culture altered for the better. Chang’s is also a testament to the power of fusion cuisine itself—eating at Chang’s represents decades of cultural and culinary history that has taken place in Venezuela. As we all know, those are my favorite types of history lessons.