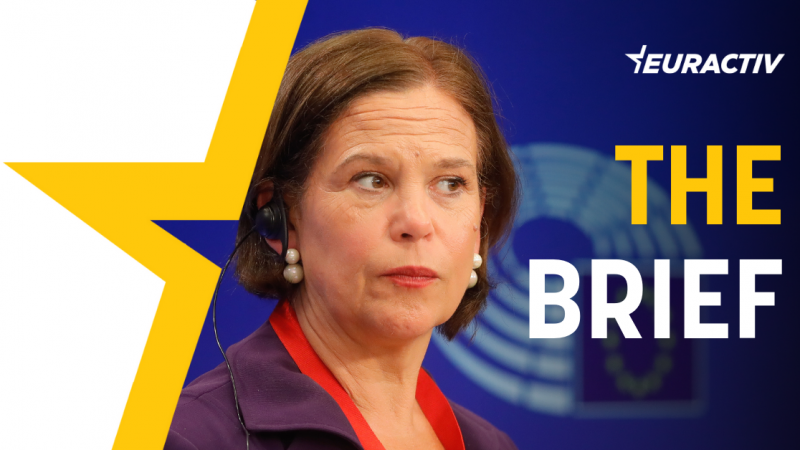 Some people may have been distracted by a little local difficulty in London this week. But for those whose political eyes can see beyond the Westminster village, the developments in Dublin are at least as significant as the fate of a certain Boris Johnson.

Sinn Féin, the main opposition party in the Dail, has tabled a no-confidence motion against the coalition government of Fine Gael and Fine Fail. The signs are that they will fall short in the confidence vote, which is set to be held early next week, but not by much.

Amid the sound and fury about the Northern Ireland protocol, and the refusal of the main unionist party to form a devolved government in Belfast following assembly elections two months ago, it has been forgotten that Sinn Féin, once the political wing of the IRA, won May’s assembly elections for the first time.

Sinn Féin’s great success in recent years has been to re-brand itself as a radical leftist party far removed from its past association with violence. Gerry Adams and Martin McGuinness, its leaders during the armed struggle with the UK, were replaced by Mary Lou McDonald and Michelle O’Neill, both women untainted by the decades of guerilla war

Support for Sinn Féin, which campaigns for a united Irish republic, has also surged in the south. The latest polls put it at 36%, more than ten points ahead of its nearest rivals. In fact, Fine Gael and Fine Fael total 40% between them. McDonald’s popularity is second only to President Michael D. Higgins, who is not party-political.

McDonald’s gambit will probably fail next week but it is highly likely that she will form the next government.

The prospect of Sinn Féin in power in both Northern Ireland and the Republic will inevitably ramp up the debate, if not public support, for a united Ireland. It will also radically increase the sensitivity, if that is possible, of resolving the Northern Ireland protocol, particularly if Mr Johnson’s successor decides that appeasing the demands of Conservative Brexiteers and the Democratic Unionist Party trumps all else.

Former Prime Minister Shinzo Abe, Japan’s longest-serving leader, died on Friday hours after he was shot while campaigning for a parliamentary election, shocking a country in which political violence is rare and guns are tightly controlled.

Russia’s top diplomat stormed out of talks with G20 foreign ministers meeting in Indonesia on Friday as Western powers criticised Moscow over its invasion of Ukraine.

Amid rising geopolitical tensions and supply shortages due to the war in Ukraine, the EU is reassessing its trade policy, a senior official of the European Commission said.

European lawmakers are looking at various financial measures to overcome the global food crisis, including increasing humanitarian aid to countries at risk of famine and the provision of direct help to Ukraine, whose grain exports remain blocked by Russia.

Meanwhile, some lawyers and rights advocates say there is an increased number of young Russian men looking to avoid the country’s mandatory military service since the conflict with Ukraine began in late February, illustrating the ambivalence in Russian society to the conflict.

Germany on Friday confirmed that the government had received a positive signal from Canada regarding the delivery of a turbine needed for the maintenance of the Nord Stream 1 gas pipeline to Germany, but could not say that the turbine had been delivered.

The European region has the highest numbers of monkeypox cases seen outside of the endemic countries. Health experts have requested preventative efforts be stepped up. Check out our infographic.

German parliament has empowered the federal network agency to define the framework for implementing electric vehicles (EVs) into the grid, using them as remote batteries to balance electricity demand.

Italian lawmakers have expressed support for the use of genetic modification techniques in agriculture to achieve more resilient crop varieties in light of the heat waves and droughts that are currently affecting Italy and other parts of Europe.

Experts from the European Commission arrived on Thursday (7 July) at a problematic border crossing between Bulgaria and Turkey in an attempt to sort out long-running phytosanitary problems that are creating domestic and international problems for Bulgaria.

War, COVID-19 pandemic and vulnerability of supply chains are pushing the EU to be more resilient and self-sufficient in pharmaceutics production. The revision of existing legislation offers the possibility to unlock investments and research in this area.