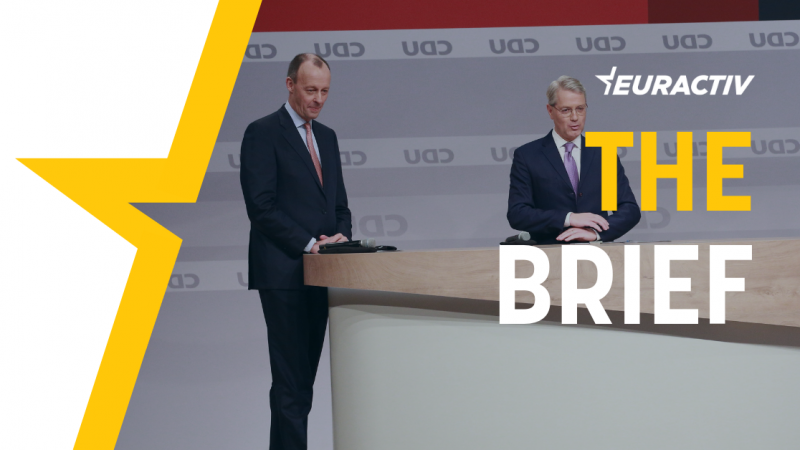 This could also be titled ‘Perhaps the last big tent party’, as the German conservatives grapple with the inevitable fall-out of their decline and defeat in September.

It was a long decline that was obscured by Angela “Mutti” Merkel, a figure so dominant that many Germans didn’t even know that chancellors could be male.

But while the party kept winning federal elections in Berlin, the warning signs were there: The Bavarian CSU lost a massive amount of votes in 2018, the far-right AfD made tremendous gains in the East, and the social-democrat SPD began winning states again, all of that nipping at the heels of the slow-turning ship that was the German conservative party.

Some may disagree with that assessment, but it is undeniable that the conservatives had been staring at the unmissable iceberg that would be Merkel’s departure for at least four years, making only token attempts at adjusting the steering wheel while hoisting additional sails.

Now, the party is experiencing a massive post-Merkel hangover: a historic election loss, infighting between the party’s business and labour wings, and continued flirtation with the idea of taking lessons from Austria’s disgraced former Chancellor Sebastian Kurz.

Instead of striking a liberating blow that would get rid of the blurry vision and migraine induced by Merkel’s departure, three men, none of them very inspiring, are now vying for leadership of the party.

The right-wing Friedrich Merz, 66, who is making his third attempt for leadership of what remains of the conservative ship; the 56-year-old foreign policy expert Norbert Röttgen, the only minister kicked out of Merkel’s cabinet after a 2012 power-play gone wrong; and the compromise candidate Helge Braun, best known for being a faithful Merkel soldier.

While the conservatives have made the unprecedented decision to let all 400,000 members vote on the future party leader, they will be choosing from a low-quality field.

One thing is sure: Whoever wins will not have it easy. They are competing for the party leadership and the right to be chancellor candidate in 2025, which poses its own set of challenges.

Merz, the current favourite, will turn 70 at the next federal election, while Röttgen is extremely low on support from top conservatives, and Braun is a tabula rasa to most Germans.

In short: none of them are winners, no matter how they wish to portray themselves.

But sooner or later, it seems, they might have to contend with the real winner, who is lurking in the shadows: The Bavarian strongman Markus Söder. He cannot challenge them for leadership of the party but may very well be a strong contender for the next chancellor candidate.

Should Söder, now 54, manage to win Bavaria convincingly in the 2023 state elections, he will easily have the strongest claim to the chancellor candidacy to challenge Olaf Scholz in 2025.

Across Europe more than 200 million people are members of active Facebook Groups. One of those is Te Lo Regalo Milano in Italy. Around 120,000 Group members find new homes for unwanted household items, raise funds and build community spirit. Find Out More >>

The three parties negotiating Germany’s next government coalition announced that they plan to table a coalition treaty and propose new government ministers next week, without presenting an exact target date for the coalition. Michael Kellner, executive secretary of the Green Party, said the negotiations would be held in a “very good, very constructive and very thorough atmosphere.”

Still in Germany, farmers say that Berlin is not doing enough to support carbon farming initiatives financially, despite government officials’ confirmation that promoting carbon removal in agriculture and forestry is of “high priority.” Environmentalists say that some practices promoted by the government actually have limited climate impact.

And the Commission has tabled its plan to introduce mandatory due diligence for products sold on the EU market, in order to ensure they are not linked to deforestation or forest degradation. In 2017, the EU was 16% of deforestation associated with international trade, and it is currently one of the biggest importers of global deforestation, second only to China.

The Commission also put forward new rules on Wednesday to crack down on the illegal shipment of waste to foreign countries, while easing procedures to trade recycled materials within the EU’s borders.

Hungarian Justice Minister Judit Varga accused the EU Court of making Budapest “practically support human trafficking” in response to a ruling that found Hungary had violated bloc rules through its 2018 law, which threatened jail time on anyone helping asylum seekers. “What happens next? Will member states be punished simply for protecting the continent from mass migration?,” she said on Twitter, stressing that Hungary will “continue to defend Europe.”

A new think tank report suggests that online content moderation be embedded in an international human rights framework, in order to establish common standards. But critics argue that this voluntary approach won’t be enough to tackle disinformation and hate speech.

On that note, sixteen new prospective companies have joined the Commission’s Code of Practice on Disinformation, as “significant changes” related to monitoring and transparency are in the works. “The only code we will accept is a strong and ambitious code implementing our guidance fully, addressing its current shortcomings,” said Věra Jourová, Commissioner for Values and Transparency.

Tackling discrimination is high on the European political agenda, but just how well are new laws and regulations actually being applied? The Fundamental Rights Agency says the COVID-19 pandemic has also exacerbated racism and related intolerance, with an upsurge in “othering” and racist incidents against people of (perceived) Asian origin, Roma and migrants.

Around 40% of cancer patients across the EU currently use complementary therapies alongside their medical treatment. Homoeopathic organisations say these therapies do not conflict with medical treatments and can generally improve a patient’s quality of life, therefore bringing patients “the best of both worlds.”