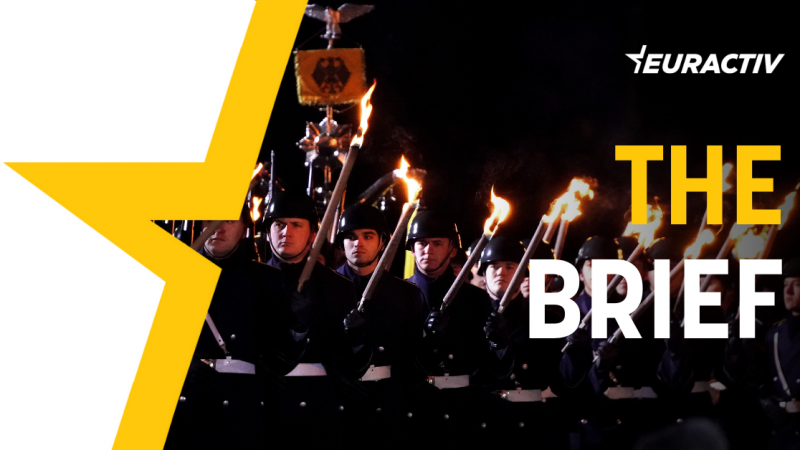 The Germany of today is inherently a pacifist country. This truth is often lost amid the big news, but political observers of the party landscape in Berlin and beyond will agree.

Many outside and sometimes inside Germany tend to forget that it is a country forged in division. Having been centre stage during decades of the Cold War has left its mark on the generation currently in power.

Consequently, most German political parties are committed to peace and de-escalation via diplomacy.

But things are now in flux, and once ‘holy cows’ are now up for slaughter.

Just the other day, abandoning the contentious Nord Stream 2 pipeline was offered as a potential way of sanctioning Russia. This change of tune, which occurred in a matter of hours, differs significantly from the previous approach to the matter.

Furthermore, there has been an ongoing discussion about whether Germany should export defensive arms to Ukraine.

For the new “traffic light” government, this means it must now wrestle with some of its most deeply held values.

For the Greens, pacifist movements and artists like Joseph Beuys are part of its founding members. The SPD also boasts a large pacifist wing informally led by the influential party parliament whip Rolf Mützenich.

About half of the government’s MPs, primarily from the SPD and the Greens, who effectively govern the world’s fourth-largest economy, lean strongly towards pacifism. And it is they who hold power as the German army is under the command of parliament.

When the military conducted its grandest ceremony, a “grand tattoo,” to acknowledge the end of its intervention in Afghanistan and the deaths of German soldiers, the military-hating pacifists across Germany frothed at the mouth at the sight of soldiers holding torches and parading in front of the Reichstag.

But the neutering of Germany’s pacifist credibility does not end there. For decades, the German military has been given the short end of the stick as its generals and inspectors have called for additional funds for years.

However, the poisoning of the debate over the military does not stop with the purse strings. Mandatory military service was abolished in 2011 amid societal disapproval at the thought of young Germans being subjected to military realities from close up.

Germany had thought itself far removed from the ugly ways of war, and it is now slowly waking up to the fact that it is not.

But what its stance will be on all things military at home and abroad needs to be decided soon. Things are coming to a head with Russia, and Chancellor Olaf Scholz’s SPD must come to terms with its largely conciliatory stance towards Russia and its partial distaste for all matters military.

Now the term “defensive weaponry” is at the centre of German debate. Vice-Chancellor Robert Habeck, then the Green party leader, made waves in May 2021, saying that Germany could hardly deny Ukraine weapons to defend itself.

Vim vi repellere licet is the Latin expression of self-defence. It is lawful to repel force with force.

Habeck’s remarks sparked outrage and little understanding in Germany, even though self-defence is very much enshrined in the German legal system.

The pacifist tide is now changing. Politicians are coming out of the woodwork, openly contemplating the possibility of greenlighting arms exports to Ukraine via NATO or otherwise.

Make no mistake. We may be fortunate enough to witness a metaphorical grand tattoo in commemoration of the closing of the chapter of bold-faced pacifism and freeriding in German history.

President Emmanuel Macron presented the programme of France’s six-month EU Council presidency before very agitated MEPs in Strasbourg on Wednesday (19 January), but it quickly turned into a sparring match with the French opposition.

The EU directive to implement a minimum corporate tax rate of 15% faces resistance from Poland and Hungary, who have insisted on linking it to another part of October 2021’s OECD tax deal. The challenge calls into question the French government’s goal of reaching an agreement by March 2022.

Member states are keen to step up talks on carbon sequestration in farming under the French EU presidency, given the Commission’s legislative proposal expected by the end of the year.

Amidst rising military tensions between Ukraine and Russia, German Foreign Minister Annalena Baerbock’s visit to Kyiv focused on the massive amounts of renewable hydrogen Germany aims to import in the future.

As relations between France and Mali sour rapidly, Paris is wondering whether it is time to stop providing military backup to a country run by a junta that has defied the international community. France, which first deployed troops in the West African country nine years ago to fight a jihadi insurgency, has spent around $1 billion a year on the fight that has cost 52 French soldiers their lives.

The European Union’s border and coast guard agency need to make its operational plans more transparent and carry out more rigorous migrant screening procedures, especially for minors, according to a report published by the EU ombudsman’s office on Wednesday (19 January).

British Prime Minister Boris Johnson was fighting to shore up his premiership on Wednesday (19 January) amid a revolt by his own lawmakers who are angry over a series of lockdown parties in Downing Street.

Marco Cavaleri, the head of vaccines strategy for the European Medicines Agency (EMA), has encouraged vaccine developers to “explore the feasibility” of making multivalent vaccines: those that cross-neutralise COVID-19 virus variants.

Last but not least, don’t miss our weekly Green Brief!