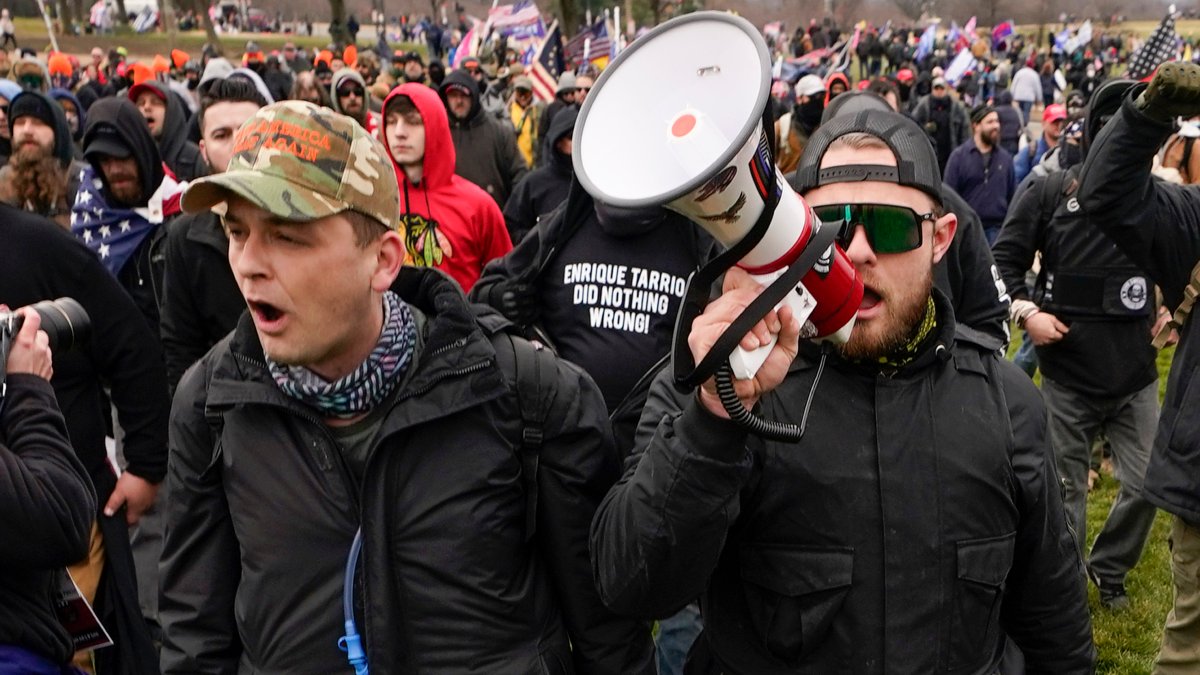 After members of the far-right Oath Keepers extremist group stormed the U.S. Capitol on Jan 6, 2021, their leader called someone on the phone with an urgent message for then-President Donald Trump, another extremist told investigators.

While gathered in a private suite at the Phoenix Park Hotel, an Oath Keeper member says he heard their leader, Stewart Rhodes, repeatedly urge the person on the phone to tell Trump to call upon militia groups to fight to keep the president in power.

Rep. Bennie Thompson, D-Miss., chairman of the House select committee on January 6, vowed to continue the committee’s investigation into the U.S. Capitol riot despite perceived efforts by some witnesses to evade testifying. “The same people who drove the former president’s pressure campaign to overturn the election are now trying to coverup the truth about January 6.”

“I just want to fight,” Rhodes said after hanging up with the person, who denied Rhodes’ appeal to speak directly to the Republican president, court records say.

Federal prosecutors have not said who they believe Rhodes was speaking to on that call, which was detailed in court documents in the case of an Oath Keeper member who has pleaded guilty in the riot. An attorney for Rhodes says the call never happened.

The story, however, has raised questions about whether the extremist group boss may have had the ear of someone close to Trump on Jan. 6 — an issue that could take center stage when the House committee that’s investigating the insurrection holds its next public hearing on Tuesday.

The Jan. 6 committee has said it is looking closely at any ties between people in Trump’s orbit and extremist groups accused of helping put into motion the violence at the Capitol.

Top leaders and members of the Oath Keepers and another far-right group — the Proud Boys — have been charged with seditious conspiracy in the most serious cases the Justice Department has brought so far in the Jan. 6 attack.

Neither federal prosecutors nor House investigators have alleged that anyone in the Trump White House was in communication with extremist groups in the run-up to Jan. 6.

But at least two men close to Trump — longtime friend Roger Stone and his former national security adviser Michael Flynn — have known contacts with far-right groups and extremists who, in some cases, are alleged to have been involved in Jan. 6.

Cassidy Hutchinson, a former aide to Trump White House chief of staff Mark Meadows, also told the House committee that she heard the Proud Boys and Oath Keepers mentioned leading up to the “Stop the Steal” rally in Washington on Jan. 6. But no further details about that have been revealed.

Cassie Miller, a Southern Poverty Law Center senior research analyst who has provided the committee with information about extremists, said she expects lawmakers to build on that testimony and possibly reveal more information about connections between people close to Trump and groups like the Oath Keepers and Proud Boys.

During the committee’s last televised hearing, Hutchinson told lawmakers that Trump instructed Meadows to speak with Stone and Flynn the day before the riot. Hutchinson said Meadows called both Flynn and Stone on the evening of Jan. 5, but she said she didn’t know what they spoke about.

In posts on the social media platform Telegram after the hearing, Stone denied ever speaking to Meadows on the phone. When asked by The Associated Press for comment about the call, Flynn’s brother replied in an email that the Jan. 6 hearing “is a clown show.”

Neither Stone nor Flynn has been charged in connection to the Capitol riot, and both of them have invoked their Fifth Amendment right against self-incrimination before the House committee. Trump pardoned each of them after they were convicted by jurors or pleaded guilty in cases unrelated to Jan. 6.

During events in Washington before the riot, Stone used members of the Oath Keepers — a far-right militia group that recruits current and former military, first responders and law enforcement — as security guards.

Photos and video on Jan. 5 and 6 show Stone flanked by people dressed in Oath Keepers gear. Among them was Joshua James, then the leader of the group’s Alabama chapter, who has pleaded guilty to seditious conspiracy and is cooperating with authorities investigating the insurrection.

Stone, an informal Trump adviser, has denied having any knowledge of or involvement in anything illegal on Jan. 6.

Javed Ali, former senior director of counterterrorism with the National Security Council, has spent his career trying to assess intelligence responses and identify threats before they happen. He feels the intelligence component of the January 6 story “still needs to be fleshed out” in future hearings.

“The Oath Keepers provided security for me on the voluntary basis on January 5. Nothing more nothing less,” he wrote recently on Telegram.

On Friday, attorneys for Rhodes told the committee that their client wants to testify in person and publicly. A spokesperson for the committee declined to comment, but it’s unlikely lawmakers would agree to Rhodes’ conditions.

The committee already interviewed Rhodes for hours behind closed doors, but he invoked his Fifth Amendment right against self-incrimination under the direction of his attorneys when asked about the post-election period, one of his lawyers, James Lee Bright, told the AP. Bright said Rhodes now wants to “confront the narrative they are portraying,” which he believes is “completely wrong.”

Rhodes, a former U.S. Army paratrooper, and four co-defendants are scheduled for trial in Washington in September. The Oath Keepers have largely avoided public forums since Jan. 6, and it’s unclear who is handling the “day to day” operations of the group with Rhodes behind bars, said Oren Segal, vice president of the Anti-Defamation League’s Center on Extremism.

The Oath Keepers have denied there was any plan to storm the Capitol. They say their communications and planning leading up to Jan. 6 was only about providing security for right-wing figures like Stone before the riot as well as protecting themselves against possible attacks from antifa activists.

Stone has also not been shy about a close association with Enrique Tarrio, the former Proud Boys chairman who is scheduled to stand trial in December on sedition charges alongside other members of the extremist group that refers to itself as a politically incorrect men’s club for “Western chauvinists.”

In February 2019 — one month after being charged with witness tampering and other crimes in special counsel Robert Mueller’s Russia investigation — Stone was summoned back to court to answer for a post on his Instagram account featuring a photo of the judge with what appeared to be the crosshairs of a gun. On the witness stand, Stone publicly identified Tarrio as one of five or six “volunteers” who provided him with images and content to post on social media. Stone said his house functioned as a headquarters for his volunteers.

Trump commuted Stone’s 40-month prison sentence in that case days before he was due to report to prison and pardoned him months later.

The Proud Boys have been trying to forge connections with mainstream Republican figures since Vice Media co-founder Gavin McInnes started the group in 2016, Miller said.

The January 6th committee has reviewed 125,000 documents for its investigation, the largest of its kind in U.S. history. NBCLX Political Editor Noah Pransky walks you through the most important numbers in the investigation.

A Proud Boys member told the Jan. 6 committee that membership in the group skyrocketed after Trump refused to outright condemn the group during his first debate with Biden. Instead, Trump told the Proud Boys to “stand back and stand by.”

And while extremist groups tend to collapse after law-enforcement authorities jail their top leaders, that hasn’t seemed to have happened to the Proud Boys. Despite a brief lull in activity after the riot, 2021 became one of the most active years for the extremist group, according to Miller.

Flynn also had contact with some far-right groups before Jan. 6. In the weeks after the election, Flynn became a leading figure in the campaign to sow doubt about the results and urge Trump to take extraordinary measures to stay in power.

Flynn called Trump’s loss a “coup in progress,” and publicly suggested Trump should seize voting machines and floated the idea of martial law. He and several allies ultimately brought those ideas directly to Trump in an Oval Office meeting that December. Flynn was also a featured speaker at a large rally in Washington on Dec. 12, 2020, backing Trump’s desperate efforts to subvert his election loss.

In text messages later filed in court, Rhodes — the Oath Keepers leader — and other members discussed how members of the group had worked with another far-right group, 1st Amendment Praetorians, or 1AP, to provide personal security to Flynn that day. A photograph taken by UPI shows Flynn leaving the rally with Rhodes and at least one member of 1AP.

The House committee has subpoenaed 1AP Founder Robert Patrick Lewis, noting in a letter to Lewis that he claimed to coordinate regularly with Flynn and also claimed to be in contact with Rhodes prior to Jan. 6.

Lewis, who has not been charged in Jan. 6, has said the group was made up of military and law enforcement veterans, and provided pro bono security and intelligence in the months after the election. In a recent defamation lawsuit, Lewis and another member of 1AP, Philip Luelsdorff, have denied involvement with the planning or execution of the Capitol attack, and said that 1AP has never been a militia or paramilitary group.

Flynn pleaded guilty to lying to the FBI during the Russia investigation before being pardoned by Trump a little more than a month before the Capitol riot.