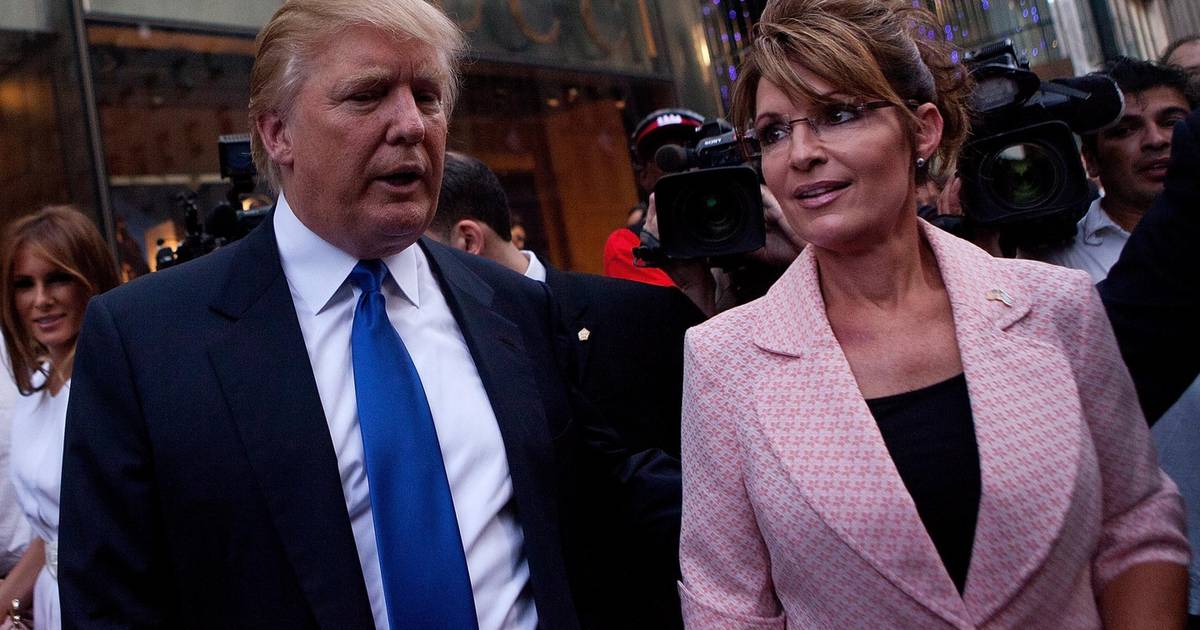 Fourteen years after her star power and incendiary rhetoric rallied crowds in her bid for the US vice-presidency, Sarah Palin takes the stage again on Saturday night — with a very different man at her side than during the 2008 election.

Palin was the running mate of presidential nominee John McCain, a war veteran and Republican Party stalwart who was this week posthumously awarded the US presidential medal of freedom by Joe Biden.

This weekend, however, as Palin seeks election to Congress, the headliner at her campaign event in her native Alaska is Donald Trump, the former president and long-time nemesis of McCain. The before-and-after contrast says much about the evolution of the Republican Party over the past decade.

She was the first celebrity culture Republican of this version of the party and she paved a pathway for Donald Trump. If you’re attractive, vibrant, get a lot of press no matter what you say so keep saying it, that’s the Donald Trump playbook — that’s the Sarah Palin playbook

It was Palin, then the governor of Alaska, who in the 2008 race arguably did more than anyone to set the stage for Trump’s raucous, racist demagoguery that took him all the way to the White House in 2016. Both candidates elevated celebrity and charisma above knowledge or expertise.

Now the wheel has turned and it is Trump seeking to give Palin a boost as the 58-year-old chases Alaska’s sole seat in the House of Representatives, made vacant by the death of Don Young, who held it for 49 years.

[ Breaking down most mystifying lines of Sarah Palin’s speech ]

“Sarah Palin was really Donald Trump before Donald Trump if you think about some of the things that she said in 2008 on the campaign trail,” said Wendy Schiller, a political science professor at Brown University in Providence, Rhode Island.

“She was the first celebrity persona of the far right who proved, to some extent, that she could get people out the door to vote. She was the first celebrity culture Republican of this version of the party and she paved a pathway for Donald Trump. If you’re attractive, vibrant, get a lot of press no matter what you say so keep saying it, that’s the Donald Trump playbook — that’s the Sarah Palin playbook.”

That Trump, who spends summers at his golf club in Bedminister, New Jersey, is willing to fly more than 4,300 miles to speak in Anchorage, Alaska, might be seen as evidence that he feels less than confident about his grip on the Republican Party. The former president’s record of primary endorsements is chequered and he has been hammered by the congressional committee investigating the January 6th 2021 attack on the US Capitol.

But his show of support for Palin could also indicate that he recognises a potentially useful ally in Congress, even if she upsets some egos. Schiller said: “She’ll become literally the queen bee of the radical-right women in the party and she’ll get all the media attention. That’s not going to sit very well with people like [extremist congresswoman] Lauren Boebert.

“We’ll see whether that results in some sort of fighting or she just becomes a director of the show and possibly positions herself, if Donald Trump runs again, to maybe be VP again. Trump likes attractive people and she may say, ‘Listen, I can get people out the door unlike you and you can win if I’m on your ticket’. This could be mutually beneficial to both of them.”

Back in 2008, Palin was aiming to become the first woman vice-president in American history. Popular in Alaska but inexperienced and untested on the national stage, she represented a huge gamble for Republican candidate McCain in his uphill struggle against Democrat Barack Obama — aiming to become the first Black president — and running mate Biden.

She turned out to be a loose cannon, accusing Obama of “palling around with terrorists” and using the term “shuck and jive” to portray him as evasive and dishonest. (She later wrote on Facebook: “For the record, there was nothing remotely racist in my use of the phrase ‘shuck and jive’.”)

She stumbled over basic questions such as what newspapers and magazines she read. Her casual references to the media “making things up” and insistence that they should “quit lying” prefigured Trump’s deployment of phrases such as “fake news” and “‘enemy of the people”.

Palin started the Republican journey into this kind of lawless presidential ticket. Trump brought it full circle and now he’s paying her back

—  Larry Jacobs, director of the Center for the Study of Politics and Governance at the University of Minnesota

McCain lost the election and later said he regretted choosing Palin. He had arguably tainted his legacy by mainstreaming what would morph into the authoritarian “Make America great again” movement.

Palin went on to campaign for the conservative Tea Party as it rode a wave of distrust in government, anger at elites and racial animus towards Obama. She also secured a reported $1 million contract as a contributor to Rupert Murdoch’s Fox News channel, seen by many as instrumental in Trump’s rise.

In 2020 Palin divorced her husband Todd after 31 years and made a surprise appearance on the TV show The Masked Singer, rapping and dancing in a pink bear costume. Last year she announced that she would get the coronavirus vaccine “over my dead body”, tested positive for Covid-19 and defied public health guidelines by dining out in New York.

In a very public trial, she brought a defamation case against the New York Times newspaper over a 2017 editorial that incorrectly linked her to a mass shooting six years earlier. She told the jury that she was a David taking on Goliath but lost the case. Now she is looking to complete her political comeback with Trump’s imprimatur.

Larry Jacobs, director of the Center for the Study of Politics and Governance at the University of Minnesota, said: “Palin was in some ways the first renegade candidate who demonstrated the Republican Party was willing to put on to a presidential ticket someone without experience and little familiarity with or devotion to the constitution or the law.

“Palin started the Republican journey into this kind of lawless presidential ticket. Trump brought it full circle and now he’s paying her back.”

Trump will also use the Alaska rally to throw his weight behind Kelly Tshibaka, a Republican challenger to the incumbent senator Lisa Murkowski, who voted to convict the former president at his second impeachment trial following the January 6th insurrection. But there is little doubt that Palin will grab the headlines.

Steve Schmidt, a trenchant Trump critic who, as a senior adviser to the McCain campaign, was the first to float the idea of Palin as a running mate, said: “It’s a rather tedious affair at this point.

“The fulminations of two deranged people are newsworthy only in the sense that there’s an open question around whether citizens of a democratic republic are potentially apathetic enough to allow such people a return to political power when their previous associations with it ended in such profound disgrace.” — Guardian