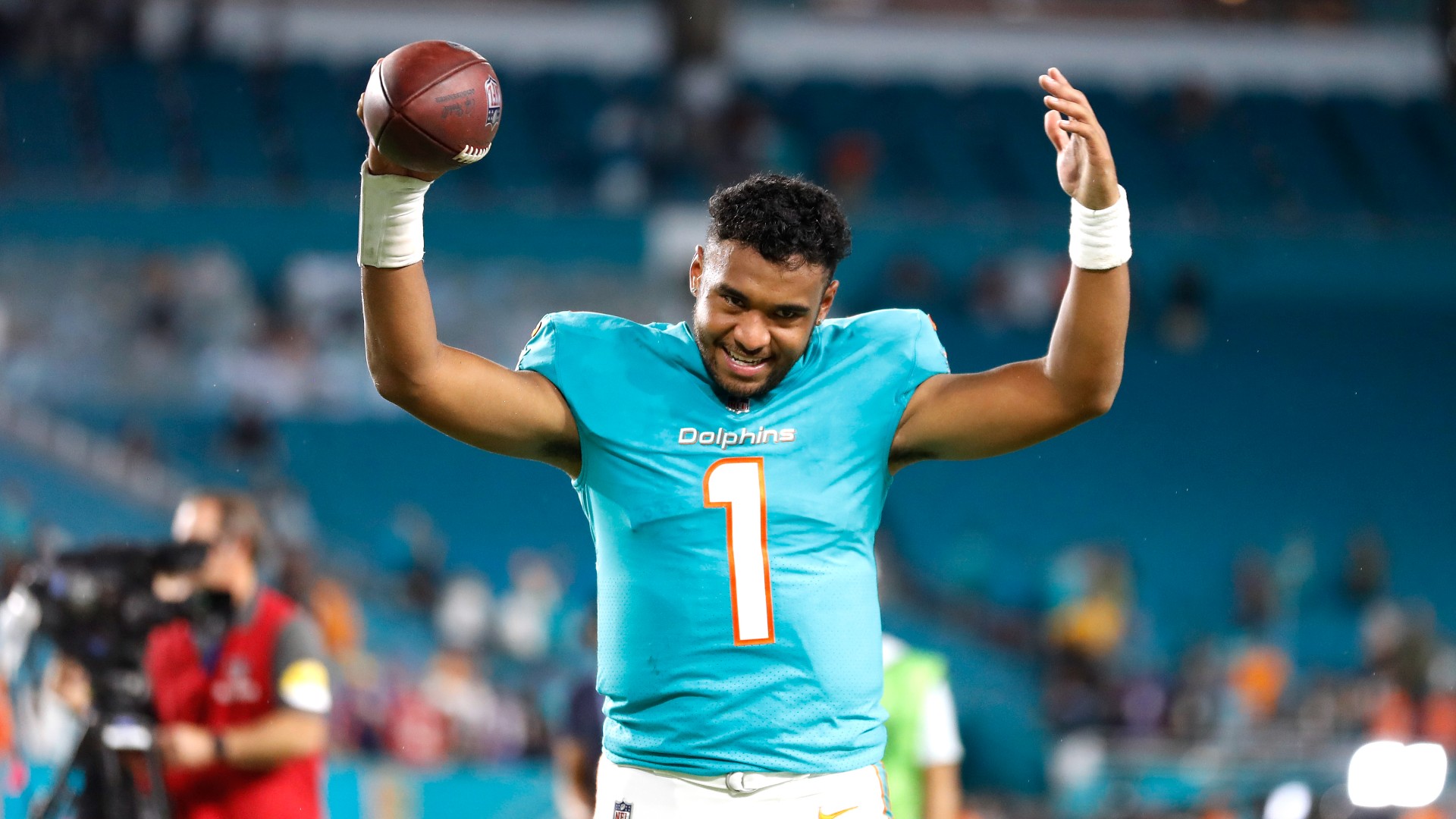 Tua Tagovailoa took over for an injured Jacoby Brissett early in the second half and led the Dolphins to a 22-10 upset of the Ravens on “Thursday Night Football.”

Brissett (11-for-23 passing, 156 yards) exited the game with a knee injury at the start of the third quarter. Tagovailoa was listed as the backup quarterback going into the matchup because of a fractured finger. As Brissett entered the medical tent on the Miami sideline, Tagovailoa prepared to take his place.

Tagovailoa helped give the Dolphins’ offense momentum, completing 8 of 13 passes for 158 yards. He also rushed 1 yard for a touchdown with 2:19 to play in the fourth quarter to extend the Dolphins’ lead to 22-10.

The Dolphins’ defense shut down the Ravens’ offense, holding Baltimore to 304 total yards and 2 of 14 on third-down attempts. Lamar Jackson completed 26 of 43 passes for 238 yards, a touchdown and an interception. The touchdown pass came in the fourth quarter.

MORE:  Why the Dolphins didn’t trade for Deshaun Watson

Miami (3-7) secured a second consecutive win while Baltimore (6-3) lost a little of its grip on first place in the AFC North. The Ravens will look to earn a win against the Bears next Sunday. The Dolphins are scheduled to face the Jets (2-6) next week in a battle to avoid last place in the AFC East.

Sporting News tracked updates and highlights from Ravens vs. Dolphins on “Thursday Night Football.” Read below for results from the NFL Week 10 game.

11:38 p.m.: INTERCEPTION, DOLPHINS.  Coleman intercepts a pass intended for Bateman in the end zone and secures a victory for the Dolphins.

11:35 p.m.:  Jackson completes to Duvernay and Andrews to move the chains into scoring territory with under a minute remaining.

11:30 p.m.: TOUCHDOWN DOLPHINS.  Tagovailoa rushes into the end zone for a one-yard score. Dolphins lead 22-10 with 2:19 remaining in the first quarter.

11:22 p.m.: TOUCHDOWN RAVENS.  Jackson tosses to Andrews into the end zone after he completes to Bateman for 20 yards. Ravens cut the Dolphins’ 15-10 lead with 4:12 remaining.

11:10 p.m.:  Tagovailoa is sacked for a loss of six yards and fumbles. Eichenberg recovers at the Miami 40.

11:05 p.m.:  Jackson throws an incomplete pass on third down, marking the Ravens’ 10th failed third down conversion attempt of the game.

10:58 p.m: FUMBLE, TOUCHDOWN DOLPHINS.  Jackson completes to Watkins, Howard knocks it loose and recovers for 49 yards to run it in for the score. After Tagovailoa fails to complete on the two-point conversion, Dolphins lead 15-3 with 11:23 remaining.

10:48 p.m.:  On the third repeat of third down, Hunt rushes to the end zone and flips at the line. The lineman was called for an illegal touch and the score was ineligible.

10:40 p.m.:  Tagovailoa completes deep left to Waddle for a 35-yard gain, giving the Dolphins a first down at the Ravens’ 25 to end the third quarter.

10:37 p.m.:  Tagovailoa completes to Gaskin, he tosses it back, then completes to him again to give the Dolphins a first down at midfield.

10:35 p.m.:  Holland brings down Jackson for a loss of seven yards. Ravens are forced to punt from their own 27.

10:32 p.m.:  Jackson fires a short pass to Andrews and is ruled complete, but the play is challenged by Miami. Following official review, the call is reversed and the pass is ruled incomplete.

10:29 p.m.:  Palardy punts for 52 yards after Tagovailoa fails to complete for a first down. Ravens start from their own 22.

10:23 p.m.:  Following the Ravens’ first third down conversion of the game, Jackson is sacked by Roberts for a loss of seven yards.

10:11 p.m.:  Tua Tagovailoa comes in for Brissett after he reportedly tried to make his return. He opens with a nine-yard completion to Waddle at the 18.

10:08 p.m.:  Jackson is brought down at the 44 for a loss of five yards. He then attempts a deep shot to Brown, but the pass is broken up and forces the Ravens to punt.

10:00 p.m.:  Brissett is sacked at the Dolphins’ 16 for a loss of eight yards. He enters the medical tent after exiting for the sideline.

9:30 p.m.: Freeman is brought down by Baker short of the first down marker. Dolphins call a time-out with 58 seconds remaining.

9:20 p.m.:  Ravens fail to convert on third down for the fifth attempt in the first half. Koch makes a 53-yard punt to put the Dolphins at their own 11.

9:07 p.m.:  Brissett completes a deep pass to Shaheen for a 21-yard gain. Dolphins start with a first down inside the Ravens’ 5. An offensive holding penalty pushes the Dolphins back to the 15.

9:00 p.m.:  Palardy punts 37 yards, marking the third consecutive drive that the Dolphins failed to convert on third down. Ravens will start from their own 16.

8:55 p.m.:  Jaelan Phillips and Andrew Van Ginkel sack Jackson for a loss of nine yards to end the first quarter.

8:43 p.m.:  Marquise Brown completes a pass from Jackson for a seven-yard gain then Eric Rowe knocks the ball loose. Rashod Bateman recovers for the Ravens at the 30.

8:37 p.m.:  Jacoby Brissett is brought down by rookie OLB Odafe Oweh at the 37 for a loss of eight yards. The Dolphins are forced to punt on their opening possession and the Ravens will take over from the 25.

8:33 p.m.: FIELD GOAL RAVENS.  Justin Tucker makes a 46-yard attempt to put the Ravens on the board. The Ravens take an early 3-0 lead  with 9:52 remaining in the first quarter.

8:25 p.m.:  The Dolphins won the toss and defer, Ravens start with the ball as it lands in the end zone on the kickoff.

What channel is Ravens vs. Dolphins on tonight?

Fox and NFL Network will simulcast the “Thursday Night Football” game between the Ravens and Dolphins. Joe Buck and Troy Aikman will broadcast from the booth; Erin Andrews and Kristina Pink will report from the sidelines.

Additionally, fans can stream the game on Amazon Prime with the same broadcast that’s shown on Fox and NFL Network.

How to watch ‘Thursday Night Football’

The game will be broadcast on Fox and on NFL Network with Fox Sports announcers Joe Buck and Troy Aikman on the call and Erin Andrews and Kristina Pink on the sidelines.

You can also stream “Thursday Night Football” live on Amazon or with fuboTV, which offers a free seven-day trial .