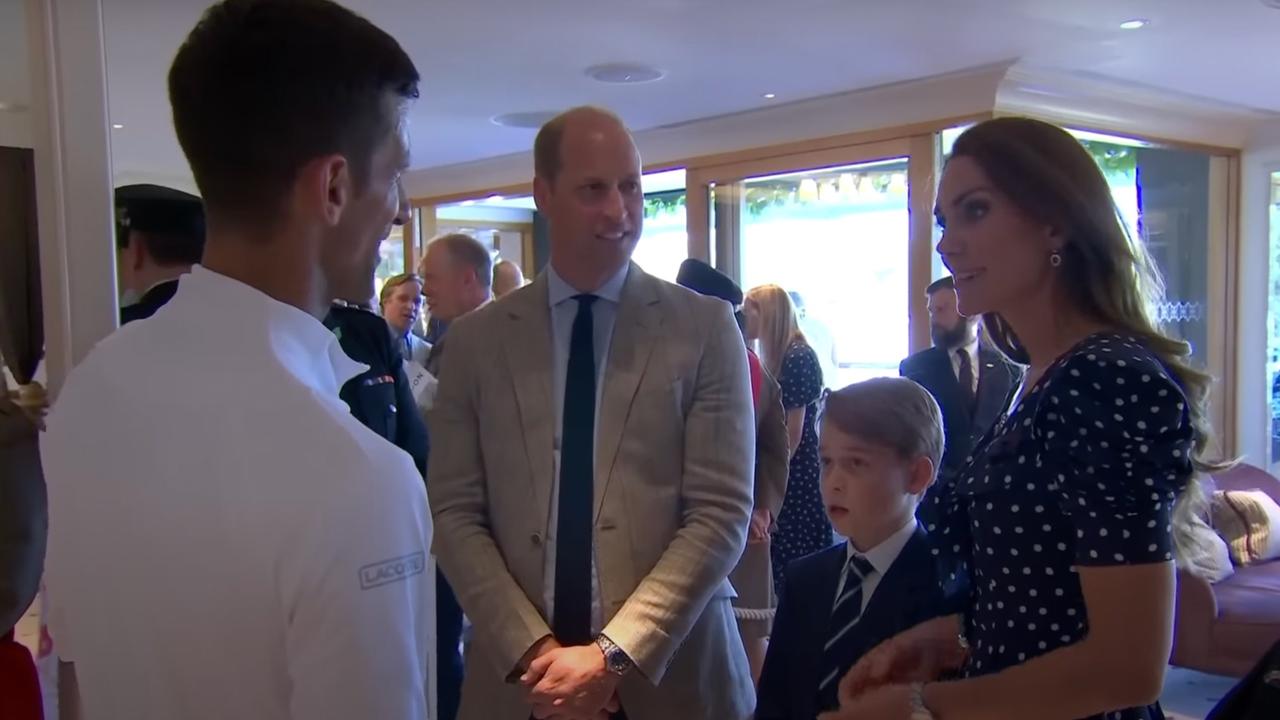 Nick Kyrgios was the topic of discussion when Wimbledon champion Novak Djokovic met with the royals after his win.

The Duke and Duchess of Cambridge have been captured pressing Novak Djokovic for answers on Nick Kyrgios following the Serbian’s sensational Wimbledon win.

In a brief meeting with Prince William, Kate Middleton and Prince George after defeating the Australian, Djokovic was probed on how he managed to return Kyrgios’ serve.

After passing the Wimbledon Cup to George, Prince William asked Djokovic, “How was that? Hard work?”

He responded, saying the heat had made it tough, particularly when combined with Kyrgios’ “big serve”.

“I was about to say – how do you beat that serve?” Prince William then asked.

Djokovic was heard giving an explanation of how he had been forced to find different ways of approaching the serve.

Kate then remarked at the “speed of the serves” Djokovic received, before turning to George for his opinion.

Djokovic asked the eight-year-old what the fastest serve he had received was, however it seemed the young royal wasn’t too sure.

“What is your favourite shot?” Djokovic then asked George.

After getting some help from his mum on what the world No. 3 meant, George revealed his favourite shot was forehand.

Kate said she hoped Djokovic would have some “down time” before leaving England.

The star player then said he hoped he would get the chance to have a hit with George one day.

Before leaving, Kate wished him a happy anniversary. It was Djokovic and his wife Jelena’s eighth wedding anniversary on the day of the Wimbledon final.

Djokovic won a seventh Wimbledon title and 21st Grand Slam crown on Sunday with a four-set triumph over Kyrgios, whose challenge unravelled in frustration after a blistering start.

“I’m lost for words for what this tournament and this trophy means to me,” said Djokovic. “It always has been and will be the most special one in my heart.”

“It’s officially a bromance,” he said.

Djokovic is just the fourth man in the Open era to win four successive Wimbledon titles after Bjorn Borg, Sampras and Federer.

“First of all congratulations to Novak and your team. You’ve won these championships that many times I don’t even know anymore,” Kyrgios said.

“I’m really happy with this result and maybe one day I’ll be here again but I don’t know about that.”