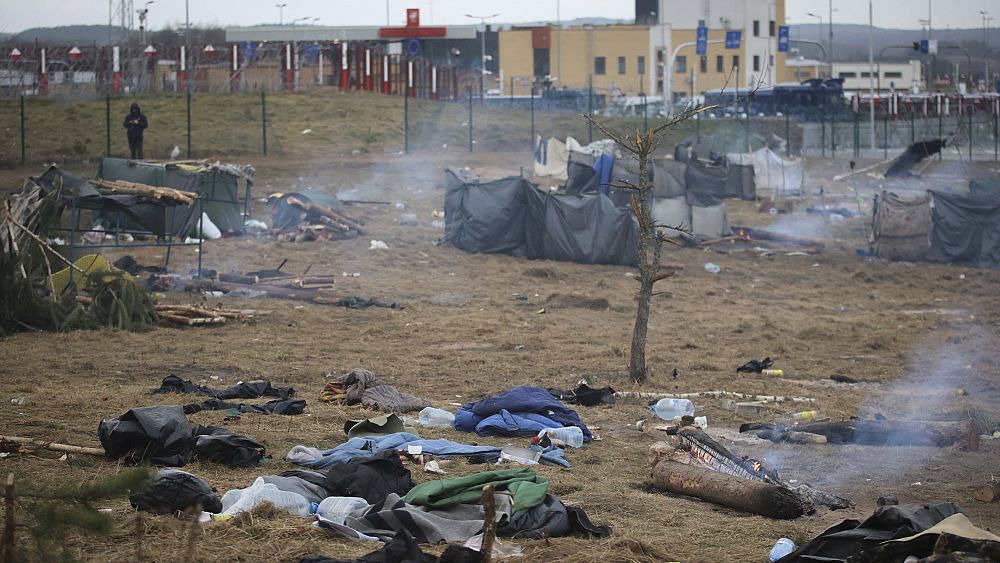 Authorities in Belarus say the migrant camp on the border with Poland has been cleared, and its people have now been moved to a nearby shelter. Meanwhile, several hundred have been repatriated to Iraq, after giving up any hope of reaching Europe.

“As of November 18, all refugees from the makeshift camp on the Belarusian-Polish border near the Brouzgui crossing point have been transferred on a voluntary basis to a logistics centre,” Belarusian border guards said on Telegram. Photos of the seemingly abandoned camp were released.

Polish border guards confirmed the evacuation of the camp, which comes after a week of growing tensions between Belarus and the European Union.

Meanwhile, more than 400 Iraqis were flown home on Thursday aboard the first repatriation flight since the crisis began.

The latest moves are being seen as a sign that the country’s disputed leader Alexander Lukashenko, accused of orchestrating the crisis, is now keen to defuse it.

More than a thousand people had already taken refuge on Tuesday in a vast hangar near the border, but Minsk said some 800 others had still spent the night outside in below-zero temperatures in tents or near campfires.

According to Belarusian border guards, they were finally relocated due to “deteriorating weather conditions”, and were able to receive “hot meals, warm clothes and basic necessities” in the hangar.

In the latest in a series of human tragedies unfolding in the cold, humid forest, a Polish NGO said on Thursday it had helped a Syrian couple who said they had lost their one-year-old son.

“It is heartbreaking seeing a child die in the cold at the EU’s doorstep,” tweeted European Parliament President David Sassoli. “The exploitation of migrants and asylum seekers must stop, the inhumanity must stop.”

The makeshift camp has been occupied by up to some 2,000 people in recent days. It was installed in a wooded area not far from the Brouzgui border post where, on Tuesday, hundreds of migrants faced water cannon fire and tear gas from Polish forces.

The Belarusian presidency said on Thursday afternoon that between 200 and 500 other people remained scattered elsewhere along the border with Poland, Lithuania and Latvia. Some 5,000 others are in the country, it added.

On Thursday evening, 431 migrants were repatriated to Iraq, most of them to Irbil, in Iraqi Kurdistan where the majority are from, the others to Baghdad.

Many children and women were on the repatriation flight, the first since the start of the migration crisis, which Baghdad said was organised “on a voluntary basis”.

Minsk claimed that during discussions between Alexander Lukashenko and Angela Merkel, the German Chancellor said she wanted to see a “humanitarian corridor” to evacuate some 2,000 migrants from the camp to Germany, which Berlin strongly denied.

The regime in Belarus, an ally of Russia and under European sanctions because of the repression of its opposition, is accused by the EU of having lured the migrants into believing they could enter Europe via its territory, to destabilise the bloc.

The European Union Commissioner for Home Affairs Ylva Johansson on Thursday accused Belarus of engaging in “an act of state-sponsored migrant smuggling” at its border with Poland.

Speaking via videolink to a Sarajevo gathering of EU and Western Balkan security officials to discuss migration management in the region, Johansson said fresh sanctions on Belarus and stopping flights to Minsk were the EU’s “most effective tools in this struggle”.

“Personally, I am certain that by spring we will more or less stop this, but not only through our political efforts, but also because Poland will truly seal the EU’s eastern border with technical means, including fences,” Hojs said.

“It is doing a terrible injustice to these people that is victimizing by making them pawns in the efforts that the Belarusian regime is engaged in to be disruptive,” he told a press conference during a trip to Abuja, Nigeria.

“We have in place authorities to, as necessary, add to the sanctions,” he warned.