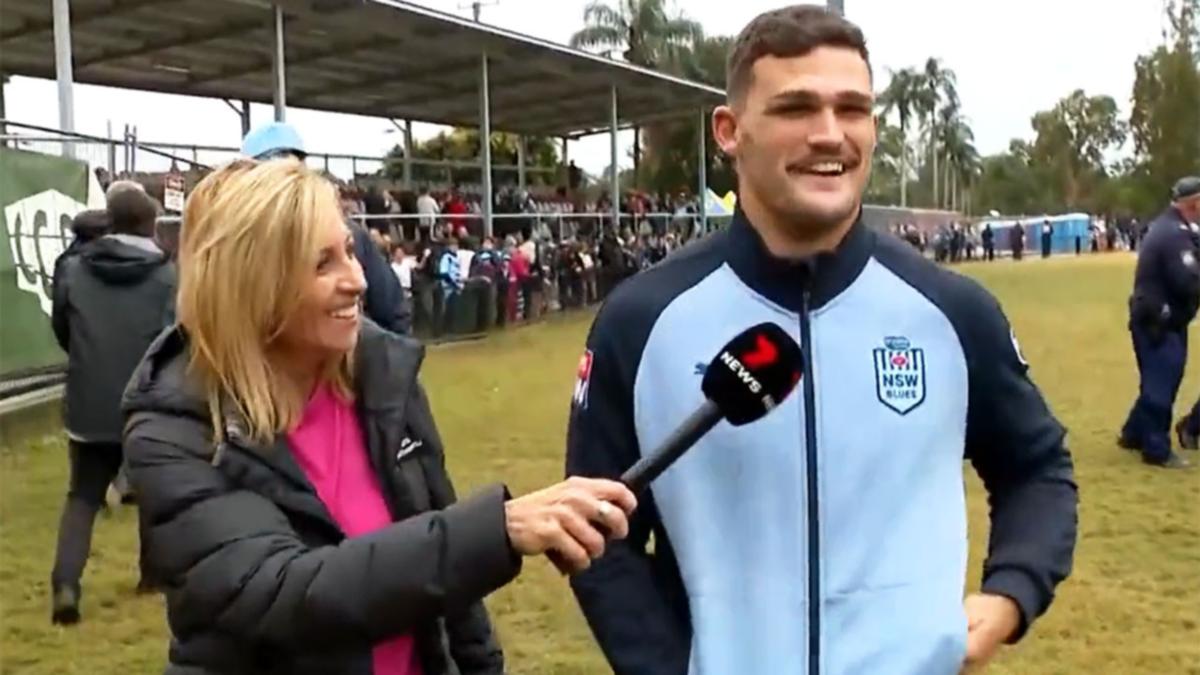 This week, hundreds of kids living in far Northern New South Wales went to sleep with huge smiles on their faces.

Many have recently been through some life changing experiences – losing their homes, not having running water, and generally having uncertainty around their immediate futures.

In the video above: COVID drama hits Origin camps before decider

As the wind picked up and rain continued to fall, nothing mattered, when that Murrays bus carrying the Blues rolled into Lismore.

It was such a privilege to see first-hand the impact Brad Fittler’s side could have almost instantly on the flood-ravaged town.

There wasn’t a single player sitting back and looking at their watches, every member of the squad was deeply engaged.

Posing for selfies, signing autographs, and just making small talk with kids who probably won’t get the chance to see them again in real life.

Kids were jumping up and down, saying things like “that was Jake Trbojevic and he spoke to me“.

It’s tough to single just one player out, but I watched with interest as Jack Wighton, who hasn’t been named to play in the decider, showed exactly why Fittler couldn’t leave him out of the squad. It’s not always about the game.

As players were called over to start training in the wet, Wighton almost had to be extracted from a bunch of kids, torn between a few boys and girls he hadn’t been able to reach, and drawn towards his responsibilities as a member of the New South Wales team.

I guess that’s why every team has a “bad cop”, but more about that later.

As the players trained the locals watched on. It was only a very light hit out, with some fancy drills working on communication (minimal intensity), but it was enough to distract the Lismore community from what they’ve been dealing with since the devastating floods earlier in the year.

After the session, it would have been far easier for the players to give the kids a little wave again and get on the bus and get out of town, nobody could criticise them for not doing their bit to spread the rugby league gospel, the boxes had been ticked.

Back to Jack Wighton. He walked straight back over to roughly where he had left off after training. Not wanting to disappoint the kids he didn’t manage to get to before training started.

Nobody headed to the sheds. One by one, James Tedesco, Angus Crichton, Jarome Luai and Damien Cook all walked over, ripped the shirts off their backs, and handed them to a few fortunate fans that will likely cherish them for eternity.

This is where I just shake my head in complete disgust. The arrogance of those who took to social media after this event and cared to share their uneducated comments about Nathan Cleary, who had already given his shirt, decided to give one little Penrith fan his shorts.

I can’t believe members of the public found this to be anything but going above and beyond to make some kids day. He wasn’t naked, he stripped down to his budgie smugglers, the ones most people own and wear to the beach or in the pool. The ones our Olympic swimmers wear on the world stage.

The comments were just nasty and highlighted a section of our community that sit at their keyboards and go hell for leather with whatever they want to make themselves feel good.

I find that behaviour disturbing. There were hundreds of people around – police, security, parents and kids just soaking up a rare good time.

Cleary would have been open to criticism if he had walked away and did nothing. I admire the fact he uses his position to provide sheer happiness and hope to sections of the community that have been doing it tough. Imagine that kid when he returns to school after the holidays, and the story he has to tell.

I’m tired of the criticism these players cop when it’s not warranted, it’s actually boring. They are working hard to change that perception.

It didn’t stop at the ground. Fans were on their bikes and their scooters parked outside the team hotel from 7am in the morning on a daily basis and not once did I see a single player turn a young fan away.

On their day off it would take some of the players up to 10 minutes to walk less than 50 metres to get outside of the hotel, just because of the sheer number of kids in their path wanting a moment of their time.

Brian To’o, Daniel Tupou, Junior Paulo and Sifa Talakai were even asked some odd questions, which were answered with respect. (What do you eat to be so big/tall?, who do you hate? Is Teddy the best player?)

As Covid struck the Maroons, protocols were ramped up at Kingscliff as a precaution, but the players never used it as an excuse to stop interacting, I watched Jacob Saifiti going to the team room, and two 11-year-olds spring out from behind a pot plant wanting a picture.

The parents probably should have been a little more across the environment in terms of Covid but it wasn’t every day their sons got such an opportunity.

To Jacob’s knowledge nobody was around (he couldn’t see me from where he was placed), so he told the kids to stay where they are and he would stop and let them take a picture from a distance. Jarome Luai caught the same kids’ attention and walked out of the team room maintaining social distance rules, but ensuring they didn’t miss out on a photo with their star.

I am in an extremely privileged position – travelling with the team, and seeing these men in their own natural environment. I’ve been impressed with the way they’ve engaged. It’s clear Freddy and his staff only encourage quality humans in their camp, a team-first attitude, and a commitment to do “whatever it takes”, as the Blues’ theme song rings home.

There hasn’t been a single incident from Sydney, Perth or Kingscliff where I haven’t been impressed with the way the players have conducted themselves.

I think it’s time we start to accept that the vast majority of modern rugby league players get what’s required of them. They understand their role, appreciate the Blues jersey is on loan (as Damien Cook so eloquently puts it).

I will go a step further to say I think it’s time some of those who have been involved in the game for a long time and find themselves in management roles, take a leaf out of the players’ books.

The majority of our new age NRL players understand branding and don’t need to be ‘protected’ from the media. That ‘us and them mentality’ is so old school.

Congratulations to the team. Now we just need you to get it right on the night at Suncorp Stadium, and the shield will be coming back home.