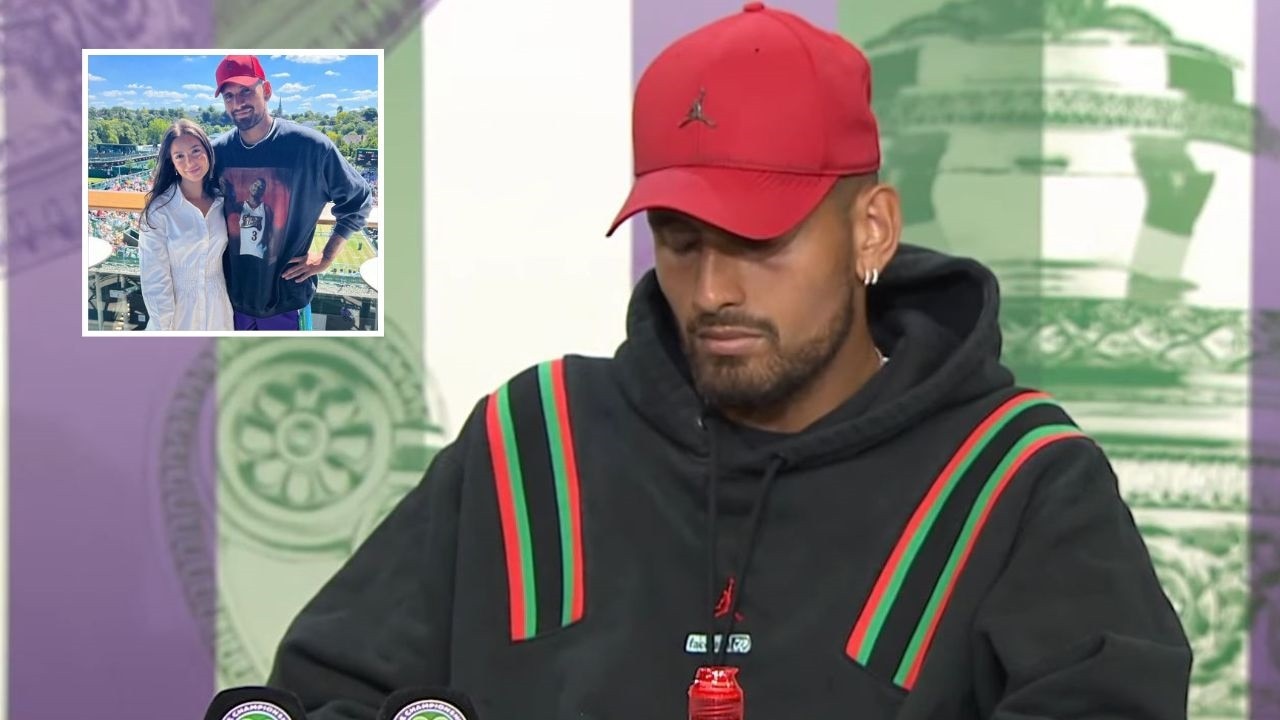 Nick Kyrgios was at his open and expansive best in a post-match press conference, but not everything was comfortable to hear.

Nick Kyrgios was in a contemplative mood after his best ever run at a grand slam, which ended at the hands of Novak Djokovic in Monday morning’s Wimbledon final.

The Serbian claimed his 21st major title to move one ahead of Roger Federer as he chases down Rafael Nadal (22) for the all-time men’s record, overcoming Kyrgios in four sets on Centre Court.

The Canberran’s girlfriend Costeen Hatzi posted on Instagram she was “super proud” of him, prompting Kyrgios to reply: “I love you tho but I’m sad.”

For so long fans have wondered what the Aussie star could achieve if his attitude matched his talent — and they got a glimpse of that reality over the past fortnight at the All England Club.

Answering questions from reporters after the final, Kyrgios was honest and expansive as he reflected on his most successful grand slam yet, speaking about the pressure he feels and what the result may mean for his future.

Nick’s sad revelation: ‘There’s so much weight on my shoulders’

Kyrgios thought his time to make a grand slam final had passed him by years ago, and was appreciative of the privileged position he found himself in at Wimbledon.

“I’m honoured to go out there and battle with the best. This is just an example that anything’s possible, really. Someone like me to go out there against Novak Djokovic, keep him there for three hours in a Wimbledon final, it’s pretty cool.”

Kyrgios showed his vulnerable side, speaking about the pressure he feels given his reputation in the sport, painting a sad picture about what life for him can be like.

Worryingly, he said he’s “never felt good” but thankfully, is in a very different space after playing the biggest match of his life now the anxiety and expectation has subsided.

“It’s just a lot mentally. Everyone supporting you, there are negative comments. There’s the pressure of playing finals at Wimbledon — am I going to do good, am I going to behave well for me? There’s so many things,” Kyrgios said.

“Playing Djokovic is a hard enough task as it is and to go out there, I lost this match but I feel like there’s this weight off my shoulders.

“I feel like there’s so much weight on my shoulders all the time when I step out on the tennis court. Now it’s just released and I feel amazing.

“This is the best I’ve felt in two weeks. I was obviously super-excited to be here and I had some high hopes, but I’ve never felt, to be honest, good.

“I just felt so much pressure. There’s so much anxiety and pressure to do things or achieve things and if I don’t do well, it’s just so much.

“So I feel unbelievable. Like I’m two beers deep.”

Elaborating on the pressure he faces and how much it affects him, Kyrgios added: “The social media, the things you have to deal with, you know, for me it hasn’t been easy the last three or four days to block everything out. Just everything — the socials and trying to find the balance.

“It’s so easy to access all that stuff and I really made a conscious effort to try and focus on the task at hand and I don’t think past tennis players understand that either. The older guys, they don’t understand how much negativity and opinions get thrown your way and it’s hard, it’s really hard to deal with all that.

What does Wimbledon loss do for motivation levels?

Asked how his motivation and belief in himself was impacted by his results over the past fortnight, Kyrgios was considered in his response.

“I feel like if I’d won today, I would have struggled with motivation. I feel like I’ve been told my entire life, winning Wimbledon is the ultimate achievement,” Kyrgios said.

“And for someone like me, you know I’m not a young gun like (Jannik) Sinner or (Carlos) Alcaraz who’ve come on tour recently and gone deep at slams. It’s taken me almost 10 years of my career to finally get to the point of playing for a grand slam and coming up short.

“I feel if I had won that grand slam, I think I would have lacked a little bit of motivation to be honest for other tournaments … I would have achieved the greatest pinnacle you can achieve in tennis.”

Kyrgios opened up on his journey and the obstacles he’s overcome when a reporter asked: “Can you clarify — has this lit a fire for you that you’re more motivated to come back, having gone so close, to go back and get the job done?”

Kyrgios replied: “I feel like my fire’s been lit this whole year. I’ve obviously met a lot of amazing people this year who have just given me extra motivation.

“To find people that finally have my back and that I just love being around, they want to push me to be a better person and a better tennis player. They realise that I’m immensely talented and feel like I have a lot more to do in this sport.

“I don’t feel like it re-lights a fire or anything like that. I know I’ve been able to beat these players before. It’s just there were other things I couldn’t figure out along the way. But it takes a hell of an athlete, both mentally and physically, to win one of these things. Eight people have won this title since I’ve been born.

“Physically, one thing, obviously it shows. Mentally, it’s another beast to come back here for two weeks in a row. None of the people in this room will understand it, but it’s just different.

Asked if he was ready to “fully commit”, Kyrgios said: “I feel like I’ve fully committed a fair bit these two weeks. I mean, what more can I do? I’ve stayed in most of the time, I’ve tried to get good sleep, eat well, not even have a beer here or there.

“I was taught that was alright, even though it sucks. Of course it sucks. I’m playing points back in my head from that match that I wish I could have back, but it is what it is.”

Why Kyrgios was ‘getting angry’

Kyrgios skipped straight through to the final after beating Cristian Garin in the quarter-finals, because Rafael Nadal pulled out of their scheduled semi-final match-up with injury.

While the rest may have been beneficial physically, it was a different story mentally.

“The anxiety of having that day off from the semi-final, I slept terribly again last night,” Kyrgios said.

“I actually think not playing the semi-finals may have done me a bit of a disservice because I was just thinking about it all the time. But that comes with experience, I thought I handled myself well out there.”

Kyrgios maintained he has the game to match it with the world’s best but admitted the knowledge he would achieve a status reserved for only the game’s greats if he won weighed on his mind, and contributed to his outbursts during the decider.

“At times out there, obviously I was getting angry a bit because I just looked at it as you win this tournament and you become a tennis immortal,” Kyrgios said.

“It was just an opportunity for me that people work their entire lives for and I put myself in a position to win the first set.

“I felt like I belonged. I feel like my game and my level’s always been there. I’ve kind of put it together a little bit these couple of weeks.”