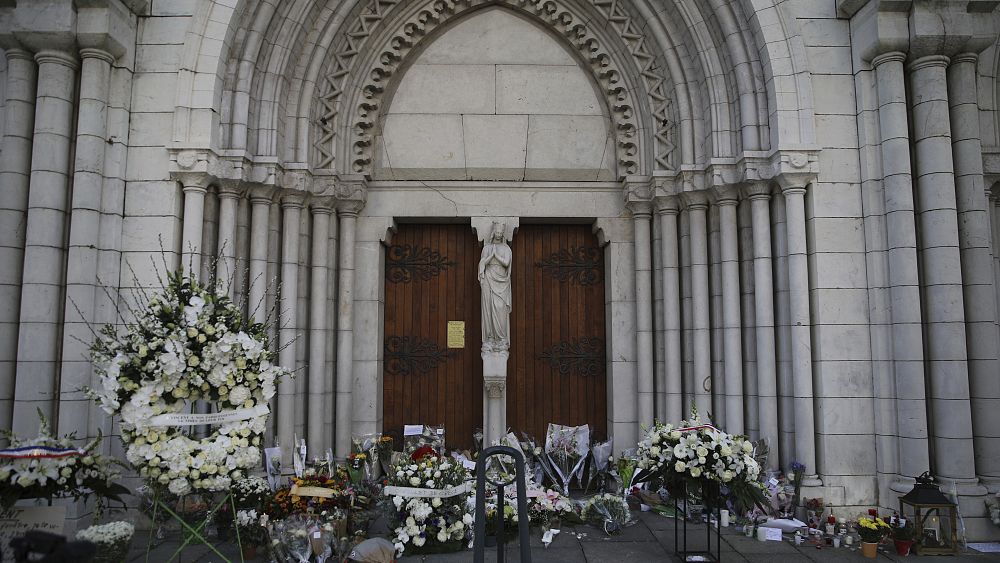 The three victims of a terror attack in the French city of Nice have been honoured, one year on.

A plaque bearing the names of Vincent Loques, Nadine Devillers, and Brazilian national Simone Barreto Silva was unveiled during a ceremony.

The three churchgoers were stabbed to death inside Nice”s Notre Dame basilica in October 2020.

Several others were injured in the attack, which French authorities described as “Islamist terrorism”.

To mark the one year anniversary, the bells of every church in Nice rang early on Friday morning.

Flowers and tributes were laid near the scene of the attack before a memorial ceremony inside the church, where one of the victim’s children also performed.

The three victims of the attack were targeted “for the sole reason that they were present in the church at the time,” according to French prosecutors.

The 21-year-old Tunisian suspected perpetrator was wounded and apprehended by police at the scene.

The incident prompted the French government to raise its security alert level to the maximum and double the number of soldiers deployed to protect schools and religious sites.

France had already heightened security nationwide before the attack amid geopolitical tensions over the prophet of Islam.

On Friday, an artistic work called “The Dove of Peace” was presented by Théo Tobiasse in front of the Notre-Dame basilica.

A number of French politicians, including the Nice mayor Christian Estrosi paid tribute to the victims.

“One year ago, Nice, France and Catholics were once again targeted. Our thoughts are with their families and loved ones,” Estrosi said on Twitter.

Renaud Muselier — President of the Regional Council for Provence-Alpes-Côte d’Azur — added that the attack was “a cowardly, abominable act of terrorism”.

Meanwhile, French senator Dominique Estrosi Sassone said that the commemorative day would be “a time of support, recognition and hope.”

Security around the Notre-Dame basilica was also heightened during the ceremony on Friday.