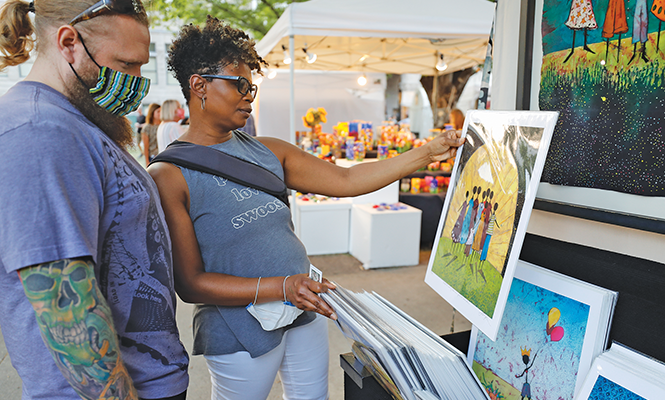 It’s been three years since the Utah Arts Festival has taken place over its traditional four days in late June. That might make it seem like a simple process of returning to normal—except that Utah Arts Festival executive director Aimée Dunsmore doesn’t really know what that word “normal” means anymore in terms of putting on the festival.

“To some extent, since it’s been since 2019, it doesn’t feel normal at all,” Dunsmore says. “It’s like re-learning, in a way, since we did things a little bit differently [in 2021]. It’s going back to, ‘How did we do this back when we did four days, and we had the same site size, and the same number of headliners?’ So there’s a little bit of a learning curve that I don’t think any of us expected. We thought we’d go back to normal, and it would be easy.”

Challenges of all kinds have been a fact of life for arts organizations of all kinds over the past two years, and Utah Arts Festival is no different. The 2021 incarnation of the event was moved to August, with a reduced size and scope, drawing around 30,000 total attendees compared to a typical pre-COVID year’s 65,000 to 70,000. While Dunsmore still believes that it was the right decision at the time, based on feedback from stakeholders and expectations surrounding COVID numbers dropping, it was clear that the one-time shift wouldn’t be repeated.

“As it turned out, it was early in the Delta surge, plus we had the fires and the air quality was terrible. There were a number of factors that hit us last year,” Dunsmore says. “[August is] not the easiest time of the year for us. School is back in session, and there are a number of events that are typically in that month earlier. I like June better; it’s where we belong, and I think where people want us.”

Moving back to June, however, didn’t necessarily demand going back to business as usual. Dunsmore and her team viewed the flux and upheaval of the COVID era as an opportunity to be thoughtful and creative about what they wanted the next evolution of the Utah Arts Festival to look like.

“Just because we did things one way in 2019 doesn’t mean we have to do things that way now in 2022,” she says. “This has kind of given us the opportunity to say, ‘Sure we did it that way, but is it the most efficient, are there more opportunities, is there something different we could be doing?’ … COVID kind of gave us permission to reassess and be open and flexible.

One such innovation for 2022 is an Emerging Artists program, which is in part an attempt to open up access to artists who might not have had an opportunity to be showcased in previous festivals. “With the community changing and all the things that have gone on in the last two years, so much has happened in our community—not just COVID, but social justice, equality, inclusivity and diversity,” Dunsmore says. “We can’t turn our heads away from that, because I think art has always been on the forefront of social change.”

Inclusion efforts have taken on a variety of other forms this year, as well. The 2022 festival will include an increased presence of ASL interpreters, both at the Word Stage and even for some music performances. Dunsmore also mentions opening up the jurying process for applicants in all of the festivals areas, allowing more voices to be heard about what should be represented at the festival. “We’ve never done that before, but that’s where decisions are being made,” she says. “It helps us get more feedback on our process. … The goal with all of that is, I want to make sure people see themselves in our programming.”

Making changes always requires a leap of faith, and it’s not the only leap of faith that was required when it came to planning for the 2022 festival. Not surprisingly, the upheaval of the past two years has had an impact on UAF budgeting, since 60 percent of revenue comes from on-site ticket sales. While it would have been easy to hunker down and put on a more limited version of the festival, the UAF board instead to reach into its financial reserves so that the budget would permit a festival close to what things looked like pre-COVID.

“That took out a little bit of what I wanted to do that was new, but focusing on our core programs and ramping that back up to essentially 2019 or higher levels, that was the goal,” Dunsmore says. “That draws the audience and sets up for next year to have people say, ‘I can’t believe I missed out on that.'”