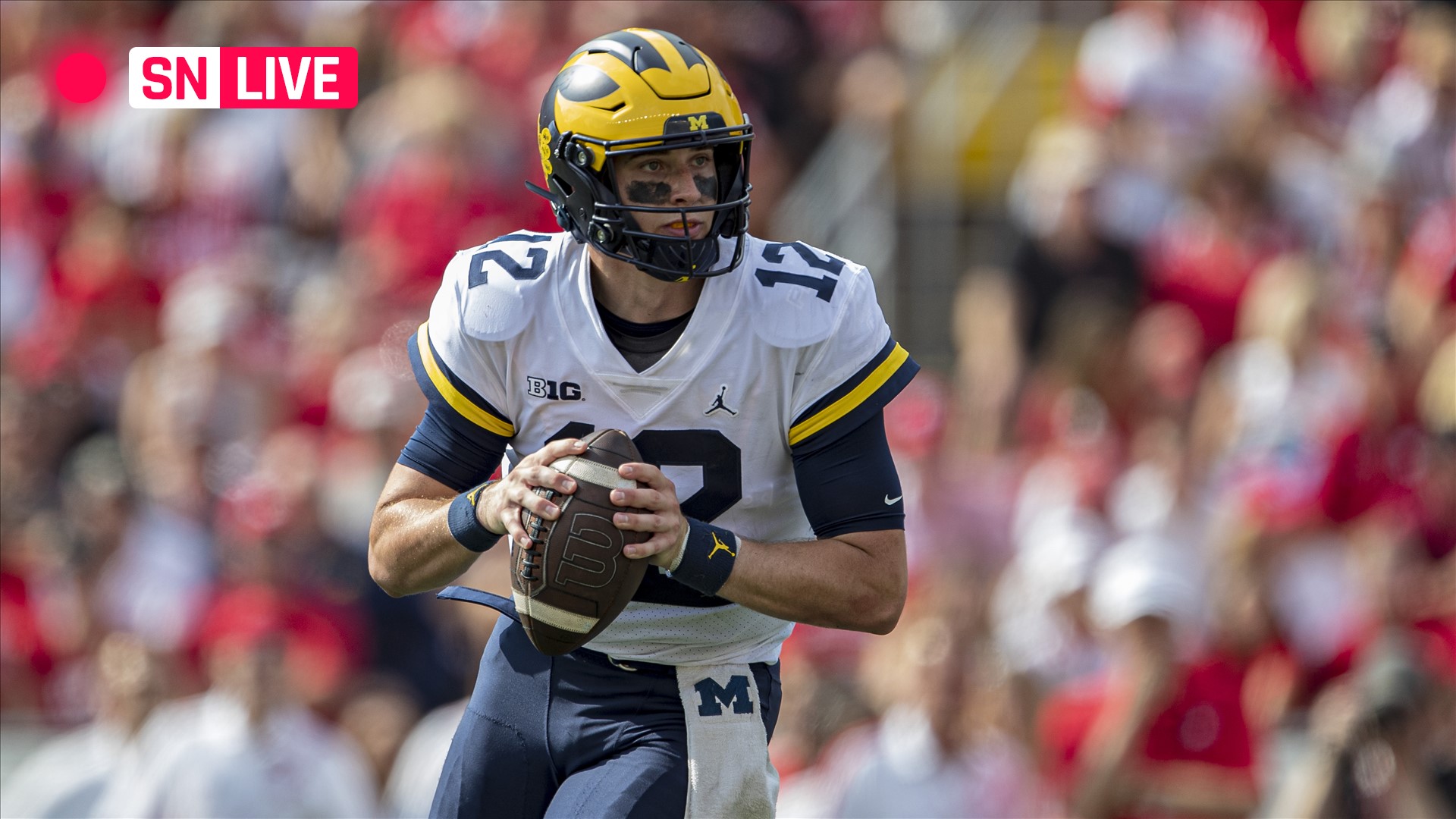 No. 8 Michigan State is scheduled to host No. 6 Michigan on Saturday in one of the most highly anticipated Big Ten games of the season.

The matchup marks the fifth time in history that the in-state rivals will play each other as top-10 teams and the first such meeting since 1964. The Wolverines will be looking for revenge after the Spartans escaped Ann Arbor with a 27-24 win last year.

The Spartans also have a terrific ground game led by running back Kenneth Walker III, who transferred to Michigan State after spending two years at Wake Forest. Walker is currently second in the nation in rushing yards (997) behind only Syracuse’s Sean Tucker (1,060).

Although the game is scheduled to take place at Spartan Stadium in East Lansing, Michigan is favored by 4.5 points, according to FanDuel.

Sporting News is tracking live scoring updates and highlights from Michigan vs. Michigan State on Saturday. Follow for complete results from the 2021 Big Ten rivalry game.

3:40: McNamara finds Sainrstil for a gain of seven to give the Wolverines a first down at the 39.

3:35: TOUCHDOWN MICHIGAN STATE. Walker III walks into the end zone for his fifth touchdown of the game. The extra point gives Michigan State a 37-33 lead with 5:08 remaining.

3:29: McCarthy fumbles on a hand off from McNamara. Michigan State recovers and gets a first down at the Michigan 41.

3:26: Ojabo brings down Thorne and strips the ball loose. Michigan State recovers and is forced to put on third down. Michigan muffs the ball on the kick return, and allows the Wolverines to start their drive from the 46.

3:25: Hutchinson earns his second sack of the day and brings down Thorne for a loss of seven yards on second down,

3:18: McCarthy steps in for McNamara and lets loose of the ball, but it bounces out of bounds to avoid a turnover for a loss of one.

3:14: McNamara finds Sainrstil for 30 yards go give the Wolverines a first down from the Michigan State 30.

3:08: TOUCHDOWN MICHIGAN STATE. Walker III runs for 58 yards into the end zone for his fourth touchdown of the game. The two-point conversion on a pass to Reed ties it up 30-30 with 12:29 remaining.

3:05: Thorne completes to Heyward for four yards and gives Michigan State a first down at the 35.

3:00: Thorne connects with Reed for 11 yards and gets brought down by multiple defenders at the 25 for a first down.

2:48: Haskins makes an eight-yard run to give the Wolverines a first down at the 47.

2:42: TOUCHDOWN MICHIGAN STATE. Walker III is tackled on the goal line for his third touchdown of the game. After the two point conversion, the Spartans make it a one possession game and cut Michigan’s lead 30-22.

2:38: Thorne finds Reed for a 28-yard pass to give the Spartans a first down at the goal line.

2:34: Payton Thorne completes a pass to Reed at the 45 to give the Spartans a first down.

2:29: TOUCHDOWN MICHIGAN. McNamara completes to Mike Sainristil for a 19-yards in the end zone. After Moody makes the extra point, Michigan leads 30-14 with 6:47 remaining in the third quarter.

2:25: McNamara makes a 20-yard run to give the Wolverines a first down from the Michigan State 22.

2:20: The Spartans are forced to punt after they fail their third attempt to convert on third down.

2:15: Michigan kicker Brad Robbins fakes a punt on fourth down and runs out of bounds just before the first down marker. The Spartans take over on downs from the 30.

2:13: A false start penalty on Luke Schoonmaker pushes Michigan back on third down.

2:11: Wolverines start from their own 25 to kick off the second half in East Lansing.

1:43: Michigan State calls back-to-back time outs with six seconds remaining in the half. Michigan will line up for a field goal attempt from the 17 after failing to complete on third down.

1:31: Ojabo brings down Thorne and forces the ball loose. After official review, Thorne was ruled down with control and the Spartans will start from the three on third down.

1:25: Hutchinson brings down Thorne for a loss of two yards. A holding call pushes the Wolverines back another 10 yards on second down.

1:23: TOUCHDOWN MICHIGAN. Andrel Anthony makes a 17-yard catch in the end zone for his second touchdown of the game. Michigan takes a 20-14 lead with 2:56 remaining in the half.

1:18: Hassan Haskins makes a 24-yard rush to put the Wolverines inside the Spartans’ 18.

1:08: TOUCHDOWN MICHIGAN STATE. Kenneth Walker III makes a eight-yard run into the end zone for his second touchdown of the half. The Spartans take a 14-13 lead with 7:16 remaining in the half.

1:07: Thorne completes a pass to Maliq Carr for a 40-yard gain. The Spartans get a fresh set of downs inside the 10.

1:00: FIELD GOAL MICHIGAN. Jake Moody kicks a 38-yard field goal to extend the Wolverines’ lead after they failed to convert on third down from the 20. Michigan leads 13-7 with 9:18 remaining in the half.

12:50: TOUCHDOWN MICHIGAN STATE. Kenneth Walker III makes a 27-yard run into the end zone for the score. Spartans cut the Wolverines lead 10-7 in the first 10 seconds of the first quarter.

12:44: The Spartans pick up a first down as Thorne completes a pass to Connor Heyward for a six-yard gain to end the first quarter.

12:41: FIELD GOAL MICHGAN. Jake Moody makes a 26-yard attempt for the Wolverines after the Spartans hold them on third down. Although he apparently loses control of the ball, the play is ruled a touchdown. Michigan extends their 10-0 lead with 1:18 remaining in the first quarter.

12:32: Daxton Hill tips off a pass from Thorne and allowed Jerome Nichols to make the second interception for the Wolverines. After an unsportsmanlike conduct penalty against the Spartans, Michigan takes over at the 30.

12:15: Thorne throws high on a pass intended to Reed. The Spartans are forced to punt and allow the Wolverines to take over at the 20.

12:08: TOUCHDOWN MICHIGAN. Andrel Anthony makes a catch from McNamara and breaks free for a 93-yard score. Wolverines leads 7-0 with 11:03 remaining in the first quarter.

12:03: Thorne struggles in the pocket and and R.J. Moten picks off the pass at the three-yard line.

12:00: Michigan wins the coin toss and defers. Michigan State starts with the ball.

Michigan vs. Michigan State will kick off at noon ET from Spartan Stadium in East Lansing, Mich.

The rivalry game will be broadcast nationally on Fox with Gus Johnson handling play-by-play duties and Joel Klatt joining him in the booth as the main analyst. Jenny Taft will also appear on the broadcast as the sideline reporter.