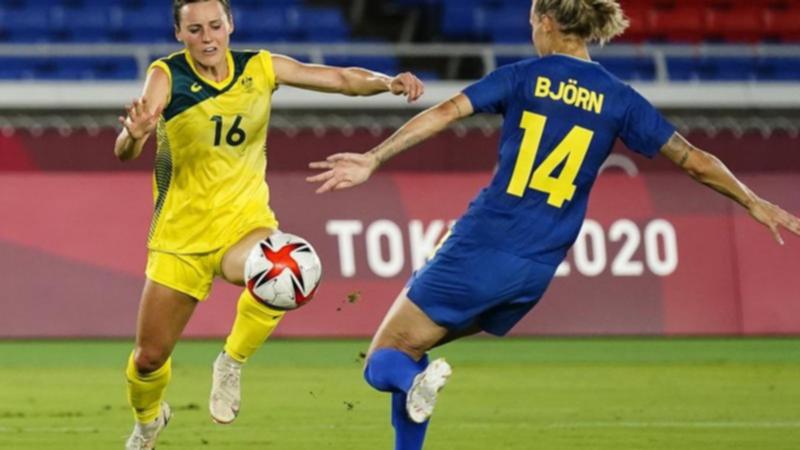 After making a winning return for her English club, Hayley Raso is looking to repeat the performance for the Matildas against world champions USA on Saturday in Sydney.

Raso, who has missed a chunk of the Women’s Super League season with a shoulder injury, lined up for Manchester City on the weekend and scored two goals plus an assist in a 5-0 rout of Aston Villa.

The 27-year-old came off the bench in the 64th minute and made an immediate impact, scoring her first goal in City’s colours.

The injury has also kept Raso, who has played over 50 internationals including the Matildas’ Tokyo Olympic campaign, out of the Australian line-up and she’s eager to make her mark at Stadium Australia.

“It feels amazing – it’s great to be back on home soil,” Raso said on Wednesday.

“I’ve missed a few camps because of injuries so it’s good to be back amongst the girls and I’m really looking forward to the game.”

The Queenslander joined City in the northern summer from Everton, however last season’s Women’s FA Cup winners and league runners-up have endured a poor start to the season.

Raso said it was satisfying personally to contribute to their biggest win of the difficult season.

“It’s been tough – I’ve missed a number of games because of my shoulder injury and going into a new team and being injured is always hard,” she said.

“It was nice to me to to get on the park and get a good few minutes in the tank and to top it off with two goals and an assist is always nice.”

After playing Brazil twice last month, Tony Gustavsson’s side will face an even tougher test against the Americans.

The Matildas haven’t beaten the USA since 2017 and lost the bronze medal match to them in Tokyo.

The visitors have brought a youthful squad with big names like Megan Rapinoe and Alex Morgan both missing.

Raso said they had a strong rivalry with the USA and she expected that to continue through the two-game series.

“We’ve beaten them a few times and they’ve also beaten us a few times, but I think it’s going to be a really great game and I know that all the girls are going to be up for it.

“They’re obviously missing a few of their mainstay players but the talent in the US is massive.

“Whoever they bring in, whether that’s younger players, or less experienced players, you can’t really disregard them, they’re always going to turn up and put on a good show.”