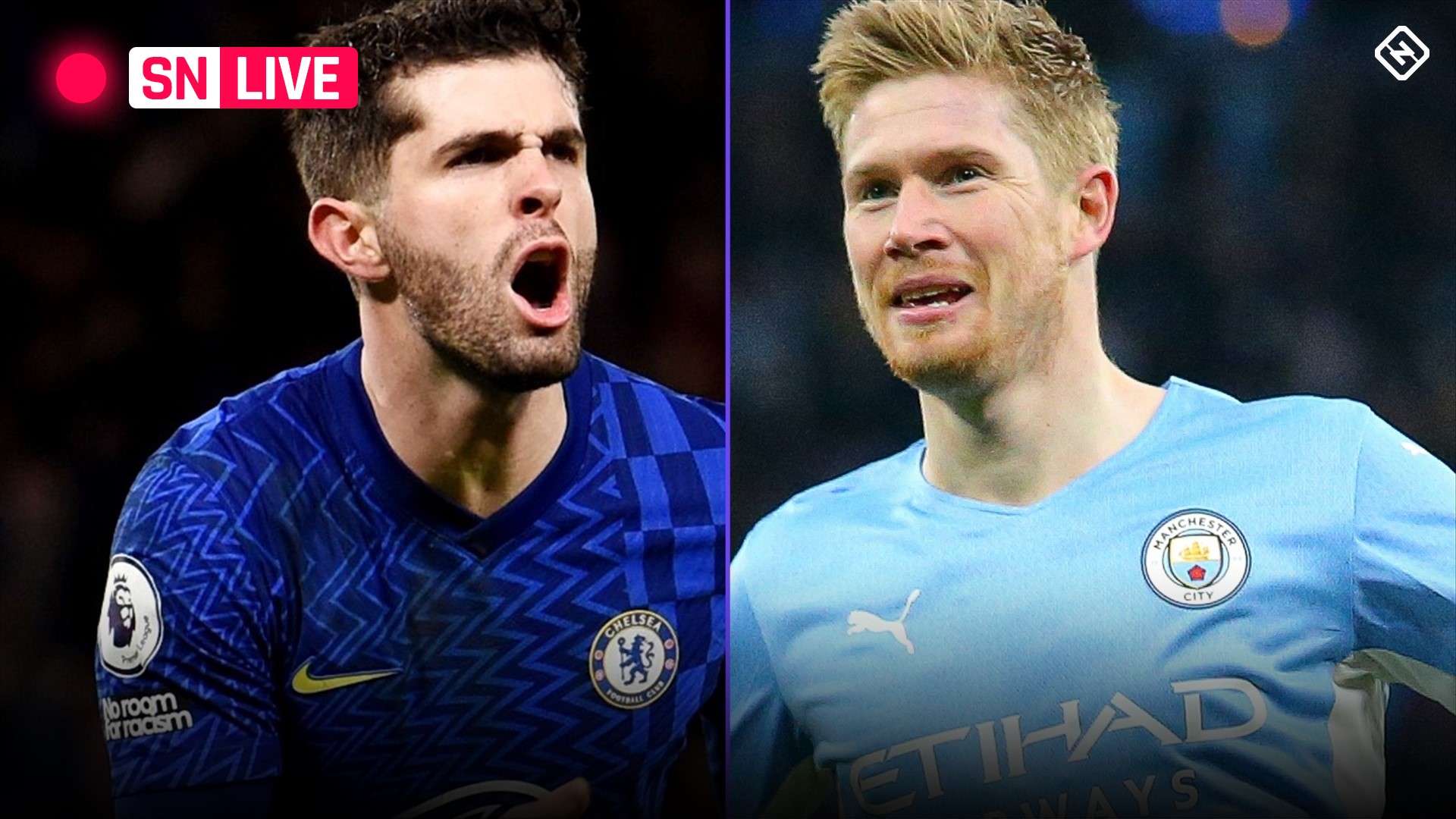 Manchester City could virtually lock up the 2021-22 Premier League title with 16 matches left to play if the defending champion can beat second-place Chelsea at home on Saturday.

Pep Guardiola’s squad has built a 10-point lead over its closest rival thanks to an 11-game league win streak that has coincided with Chelsea dropping points of late with six draws and a loss in that same span.

After a strong start to the campaign, Chelsea’s momentum was interrupted for a lengthy stretch by a combination of COVID-19 cases and injuries. Although the reigning European champion has fallen behind, a win at the Etihad Stadium would revive its title hopes just days after advancing to the Carabao Cup final.

MORE: Pep bites back at those who call Man City lucky

Chelsea had Man City’s number last year after manager Thomas Tuchel took the helm of the Blues in January 2021. In a period of a few weeks, he guided the Blues to a Champions League final victory over City and an FA Cup semifinal knockout win.

Manchester City exacted some level of revenge this season with a 1-0 victory at Stamford Bridge in September on Matchday 6. But the ultimate payback would be virtually knocking out Chelsea from another Premier League race. Chelsea last won the EPL in 2016-17; Man City has three league triumphs since then and a fourth may not be far behind if the result goes its way on Saturday.

Sporting News is following the match live and providing live score updates, match commentary and highlights as they happen.

70th min.: And just as Chelsea bring on the subs, Kevin De Bruyne comes up with a moment of magic. He gets past N’Golo Kante and then curls a shot inside the right post and out of Kepa’s reach. Spectacular finish. And Man City fans are chanting “Campeones! Campeones!”

Kevin De Bruyne has scored 5 PL goals against Chelsea. He hasn’t netted more vs any other team than his former club.

That’s how you open the scoring. 🤩 pic.twitter.com/8AzLx9ZbN3

69th min.: SUBS – Callum Hudson-Odoi and Timo Werner are on for Christian Pulisic and Hakim Ziyech. That speed could cause Man City issues.

63rd min.: Chelsea ‘keeper Kepa punches a Kevin De Bruyne free kick over the bar for a corner. And then he punches away the ensuing corner. Kepa has been confident and solid in goal in Edouard Mendy’s absence.

59th min.: After a lively start, we’ve settled into the same pattern of play seen in the first half. The subs can’t be too far away. This game needs an injection of energy and ideas.

52nd min.: Another Man City cross from the left that goes across the face of the Chelsea goal. Those plays are Exhibit A for fans and pundits wanting to see Man City acquire a center forward.

47th min.: What a start to the half. Man City see a De Bruyne cross go across the face of Chelsea’s goal. Then on the other end Lukaku ran onto a through ball and his shot was stopped by Ederson who came way off his line. Ziyech couldn’t put away the rebound. Promising start.

46th min.: The second half is underway. No subs to resume play.

Halftime: The game is going as you would have imagined. Man City’s pushing the game, while Chelsea’s comfortable defending with one really good chance created by either side in the first half. Occasionally, Man City’s wingers have caused problems for Chelsea’s wingbacks but the visitors have held strong.

The 0-0 at halftime is fine for Chelsea, but the Blues are going to have to take more attacking risks — they need to come away with a win from this one. Lukaku, Pulisic and Ziyech are struggling to combine and changes in those forward positions are likely in the second half.

0 – Chelsea failed to attempt a shot in the first half at the Etihad; the first time they’ve failed to do so in a Premier League game under Thomas Tuchel, and first time overall since May 2018 v Newcastle. Sheltered. pic.twitter.com/lBBLcUcmF0

39th min.: What a save by Kepa! Kevin De Bruyne stripped the ball from Mateo Kovacic outside the Chelsea box and Jack Grealish was in one-on-one against the ‘keeper, but Kepa came off his line and got the slightest deflection for a corner. It was the most clear-cut opportunity of the match. The ensuing corner amounted to nothing.

32nd min.: These teams are cancelling each other out. We have a second caution and it’s Chelsea’s Mateo Kovacic who was late on a tackle from behind on Bernardo Silva. Kovacic has been working hard in midfield. In fact, most of the Chelsea midfielders and forwards have been busy chasing, defending, and hunting for the ball.

21st min.: This game is going to script: Man City building, targeting the flanks and testing Chelsea’s defenders. (So far Malang Sarr and Antonio Rudiger have been strong.) Chelsea is trying to win the ball and go forward fast, but its forwards are struggling to combine. Tuchel’s men need better play from center forward Romelu Lukaku.

14th min.: After a short corner by Man City, John Stones gets a header on target but it’s right at Kepa. The match has a feel of a true heavyweight battle so far.

10th min.: A slip by Man City center back Aymeric Laporte opens a running lane for Romelu Lukaku who makes a bad decision when he got to the box and passes to Ziyech, who was offside. A real opportunity vanishes for the visitors.

7th min.: On the other flank, it’s Raheem Sterling beating Marcos Alonso and the Chelsea man gets booked for it. Those Man City wide players are going to be a real problem for Chelsea.

4th min.: Man City’s Grealish nearly beats Azpilicueta on a ball over the top and goalkeeper Kepa has to come off his line, kicking the ball away and off his teammate for a Man City corner. Nothing comes of it. It will be interesting to watch whether Man City target Azpilicueta during this game.

1st min.: After the players take a knee, Chelsea kicks us off. Hakim Ziyech is on the left and Christian Pulisic is set up wide right.

7:29 a.m.: Teams are on the field, benches have greeted one another. This game is about to kick off.

Tuchel on starting Ziyech & Pulisic over Mount: Christian & Hakim for their fresh legs and because they’re a bit more runners than for example Mason. We thought about it [playing a false nine] to maybe create a bit of an overload but I think it can suit Romelu as well.” #MCICHE

6:52 a.m.: The lineups are out and outlined in full (with subs) in the next section. There are surprises on both sides with Ruben Dias (Man City) and Jorginho (Chelsea) on the bench to start the match. Man City have several academy players among the subs.

5:42 a.m.: Here’s something to kill the time before the game: Rio Ferdinand sat down with Kevin De Bruyne:

Man City boss Pep Guardiola has been full of admiration for Chelsea’s Thomas Tuchel ahead of this weekends top of the table clash 🙌 pic.twitter.com/TKodzFgsH3

Manchester City won’t have players available because of COVID-19, but the club’s not naming names. Center back John Stones is available again and takes over for captain Ruben Dias , who makes a rare appearance on the bench. Jack Grealish is back in the starting XI with  Riyad Mahrez  away at AFCON 2022 with Algeria.

On matchday we learned that Oleksandr Zinchenko is out with a knock after missing two matches due to COVID-19. Also missing from the squad are Nathan Ake , Cole Palmer and  Kayky , but no reason for their absence has been disclosed thus far.

American winger Christian Pulisic gets to play in a preferred forward role, while Jorginho , Mason Mount and Kai Havertz start on the bench.

How to watch Man City vs. Chelsea

Saturday’s match between Man City and Chelsea from the Etihad will be broadcast exclusively on NBC’s premium streaming platform, Peacock, in the USA.