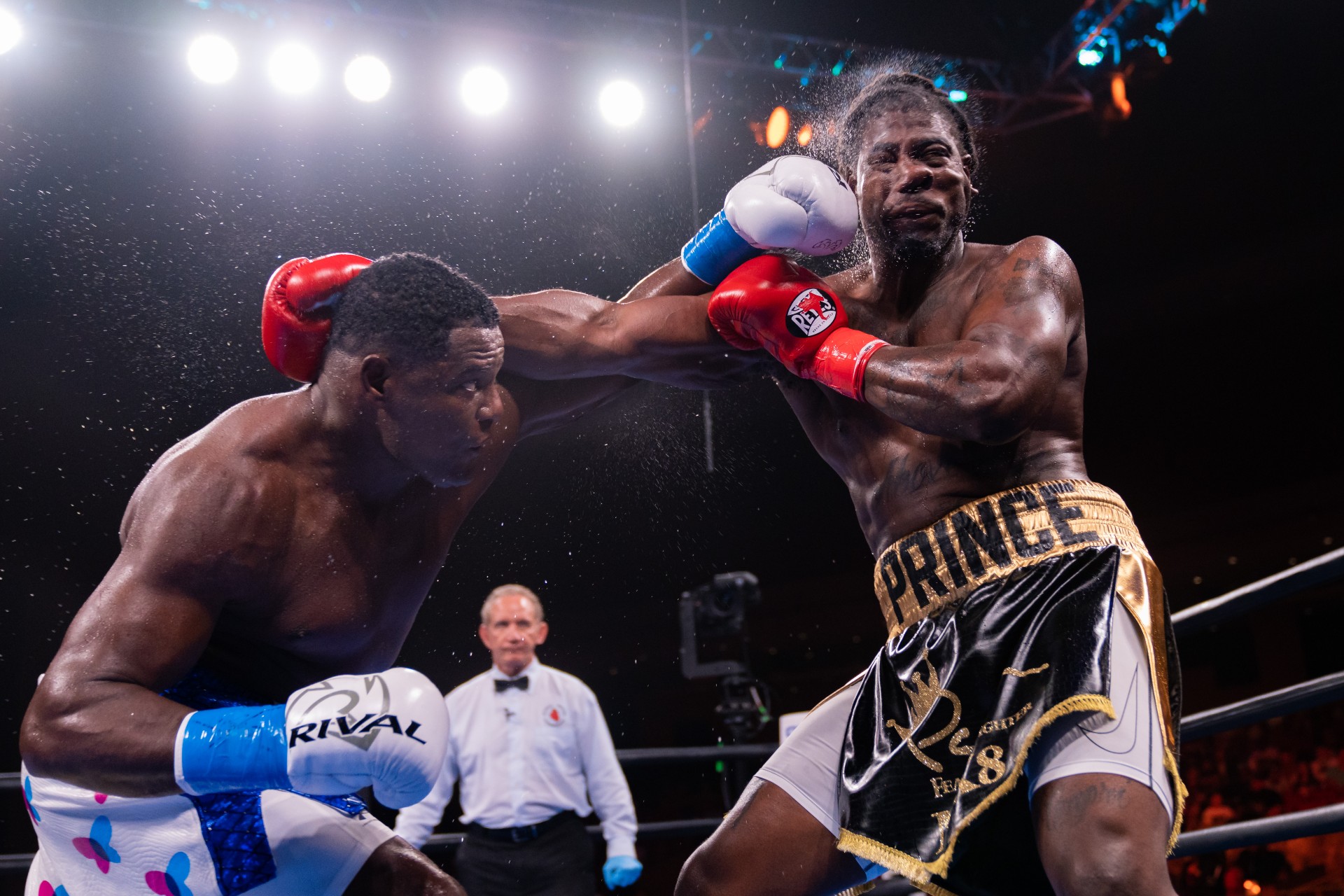 Luis Ortiz promised fireworks in his fight against Charles Martin, and he followed through in a big way. “King Kong” came back from adversity to knock out Martin in the sixth round Saturday night inside the Seminole Hard Rock Hotel and Casino in Hollywood, Fla., and get 2022 off to an explosive start.

Ortiz’s family, crying from the opening bell, stormed the ring to celebrate the victory by the 42-year-old fighter.

Martin was leading into the sixth round after controlling the entire fight. The former IBF heavyweight champion dropped Ortiz with an overhand shot in the first. Ortiz’s legs were ready to buckle, but he managed to survive an onslaught by Martin that included combination shots to the head. Ortiz tried to be the aggresor in Round 2  but Martin continued to land body shots. Hooks to the head were landing but Ortiz still managed to make the fight competitive in that round.

It was all Martin during Rounds 3 through 5. He jabbed away at Ortiz and landed a hook to the body. Martin was too fast for Ortiz’s offense and his defensive shots were doing wonders. While Ortiz landed a solid left to the head in Round 4, Martin avoided any more dramatic blows. Martin then dropped Ortiz again with a simple jab that shocked the crowd, the announce team and Ortiz himself.

Body punches continued to land as Martin would not stop throwing volume shots. Ortiz’s legs were starting to fail him, but he would not submit. Martin pushed Ortiz back and most people had determined that the fight would not last any longer.

Ortiz, however, managed a huge comeback as the bell rang for the sixth round. He battered Martin with overhand shots, knocking him into the ropes. Once out of the ropes, Martin had no idea where he was. Ortiz landed body shots and then combinations to the head. Another overhand shot had Martin down again, and the referee had no choice but to call the fight.

An ecstatic Ortiz (33-2, two no-contests) has now won two in a row and is back to being a heavyweight contender. This was an eliminator fight for the IBF belt. Martin (28-3-1) saw his three-fight winning streak come to an end.

Sporting News provided live results and round-by-round updates of the heavyweight fight between Luis Ortiz and Charles Martin. Here’s how it all went down (all times Eastern):

Round 6 (11:49 p.m.): Ortiz is hurting Martin and battering him, knocking him down between the ropes. Martin’s glove gets caught on the ropes. Ortiz then lands body blows. Lefts and rights connect and now Ortiz is landing hard shots to the body. He lands an overhand shot to the head and Martin goes down again. The referee calls the fight off. Ortiz survives and wins.

Round 5 (11:45 p.m.): Body shots by Martin land as Ortiz’s family is seen crying in their seats. Martin continues to land body shots as they come more frequently. Ortiz’s legs are wobbly as he tries to continue on. He lands a body shot but Martin is able to land more volume blows. Martin lands another set of shots that push Ortiz back. 10-9, Martin (49-44, Martin)

Round 4 (11:41 p.m.):  Martin continues with the jab to the head as Ortiz cannot counter. Ortiz does land a left to the head, but Martin’s defense halts any momentum Ortiz could have had. Martin backs up a bit as Ortiz attacks again. Combination body shots by Ortiz and an overhand right land. Martin drops Ortiz again with a jab before the end of the round. 10-8, Martin (39-35, Martin)

Round 3 (11:37 p.m.):  Martin goes inside and works on jabbing away at Ortiz. He lands a hook and Ortiz counters with a body shot. Ortiz tries landing a combination but Martin is too fast for him. Martin lands a solid shot to the head to give him the advantage in the third. 10-9, Martin (29-27, Martin)

Round 2 (11:33 p.m.): Ortiz once again is moving forward, but Martin reverses right away. Martin lands multiple body shots and then an overhand hook to the head. A counter shot by Ortiz lands and now he continues to land head shots. Ortiz lands body shots before the round ends. 10-9, Ortiz (19-18, Martin)

Round 1 (11:28 p.m.): Ortiz and Martin both start with jabs. Martin is being pushed back and slips following a high jab. Martin then lands an overhand knockdown shot to Ortiz’s face. Martin then lands combinations that push Ortiz back. Ortiz tries a body shot to end the round. 10-8, Martin

11:20 p.m.: The main event is underway. Charles Martin comes out to the ring first, followed by Luis Ortiz.

11:10 p.m.: Sanchez wakes up in Round 9 and lands body shots and blows to the head. Things get chippy before the bell as Hammer holds onto Sanchez. Hooks by Sanchez land to start Round 10 and Sanchez lays into Hammer with body shots. While he didn’t end the fight in magnificent fashion, Sanchez did get the win via unanimous decision (100-89, 100-89, 100-89).

Christian Hammer ties a world record for fewest punches landed in a 10-round fight with 24 connects.

10:45 p.m.: Round 4 is more of the same, and while Hammer pressured Sanchez in the fifth, the latter stayed composed. Body shots contiue to be the theme for Sanchez, who may have been playing it a little safe. Through Round 8, Sanchez is chasing Hammer around, with the latter fully recovered from the damage taken before.

10:30 p.m.: The co-main event is up next as Frank Sanchez faces Christian Hammer. Sanchez hits an overhand shot as Hammer’s footwork looks solid at the start. A reaching jab by Sanchez connects and now Hammer is being pushed back. In Round 2, body shots are landing as Sanchez hits calculating blows. Combination jabs by Sanchez land as he continues his assault. Sanchez then lands body shots that break through Hammer’s defense and lands a few more down the middle.

9:50 p.m.: Coffie and Rice are evenly matched after five. The former then lands a huge blow in Round 6 that pushes Rice back. Rice is now swinging at Coffie and holding him by the corner. Coffie is bleeding from the eye and Rice is aiming for it with each shot. Rice pushes Coffie back as the eye continues to get worse. It is a stalemate in Round 9 as both are waiting for the other to make the next move.

9:30 p.m.: A rematch between Jonnie Rice vs. Michael Coffie is next. Coffie is being cautious of Rice, who is chasing after him early in Round 1. Rice then lands a big right and backs away. Rice slips toward the end of Round 2 following a Coffie shot. Both try to wrestle one another into the corner in Round 3 and now Coffie is chasing Rice around the ring. Coffie lands multiple reaching jab as Rice’s hands are down. Rice now opens up on Coffie against the corner, showing signs of life. They both exchange blows to end Round 4.

9:15 p.m.: Washington is getting punished by Demireze, who looks fresh. The eye that was bleeding is now shut. The referee finally stops the fight in the eighth when Washington shows no signs of aggression.

8:55 p.m.: Washington misses a hook to open Round 4 and Demireze lands a big one of his own. Demireze backs Washington up against the corner and holds him there. Washginton hits multiple jabs to open Round 5, pushing Demireze back. To his credit, Demireze has managed to break through Washington’s defense to land crisp blows. He lands multiple hooks and Washington looks uncomfortable and extremely tired. A knockdown in the sixth finally puts down Washington, who is bleeding right by his eye.

8:15 p.m.: Opening the main card is Viktor Faust vs. Iago Kiladze. Faust plants Kiladze into the floor right away to open Round 1. Immediately after, Faust gets pushed back onto the floor. He then responds with a big shot to the face that knocks Kiladze down. Overhand hooks are now being thrown by both, and they are thunderous. Faust goes down again to start Round 2. Kiladze is now landing overhand shots to Faust’s face. A few hooks connect, and now Kiladze lands on the floor. The referee calls the fight after the latest knockdown.

6:30 p.m.: Duno starts landing body shots, running after Martin in the fourth. Martin lands a few good shots with Bruno by the ropes and then knocks him down with a huge left. A counter left drops Duno again and the referee stops the fight. That ends the TV part of the event.

6:15 p.m.: Up next on the TV portion of the card is Frank Martin vs. Romero Duno. Martin is defensively sound to start the first round while also landing big body shots. Duno lands a reaching jab in Round 2. Martin lands multiple combinations that break through the defense of Duno, who is now swinging wildly.

6 p.m.: In the seventh, Pero lands a shot below the belt that halts the action. As Bruzon goes for the uppercut, Pero lands a shot that pushes him back. Both start smothering one another to start Round 8, and they eventually have to be pulled apart. Pero lands vicious shots but the fight ends before he can gain any true momentum. What he did, however, was enough to get the win via unanimous decision (78-74, 78-74, 77-75).

5:50 p.m.: Round 3 is all Bruzon as he attacks the body. He lands counter uppercuts, but that doesn’t stop Pero, who is playing it close to the vest. Bruzon starts bleeding from the mouth in Round 4 following a brutal hook by Pero. Pero’s shots continue to land as each blow hurts Bruzon. By Round 6, Pero appears to be slowing down, but his punches are still connecting.

5:30 p.m.: Pero is the aggressor to start the fight, landing uppercuts, quick jabs and body shots. He then lands counter punches as Bruzon tries to find an advantage. Bruzon lands a jab but Pero comes back with a big hook across the chin. After backing Pero into the corner, Bruzon starts to swing away. Body shots by both land as they try to tire the other out.

5:20 p.m.: We are live following a delay in the Fox broadcast. Already in the ring are Geovany Bruzon and Lenier Pero to kick things off before the main card.

How to watch Luis Ortiz vs. Charles Martin

The Ortiz vs. Martin pay-per-view main card is available in and out of the U.S. on the Fox NOW app, FITE.tv and FoxSports.com. The PPV portion of the event will begin at 8 p.m. ET. The earlier fights, however, are viewable live on FOX around 5 p.m. ET. Ortiz vs. Martin will cost fight fans a generous $39.99.