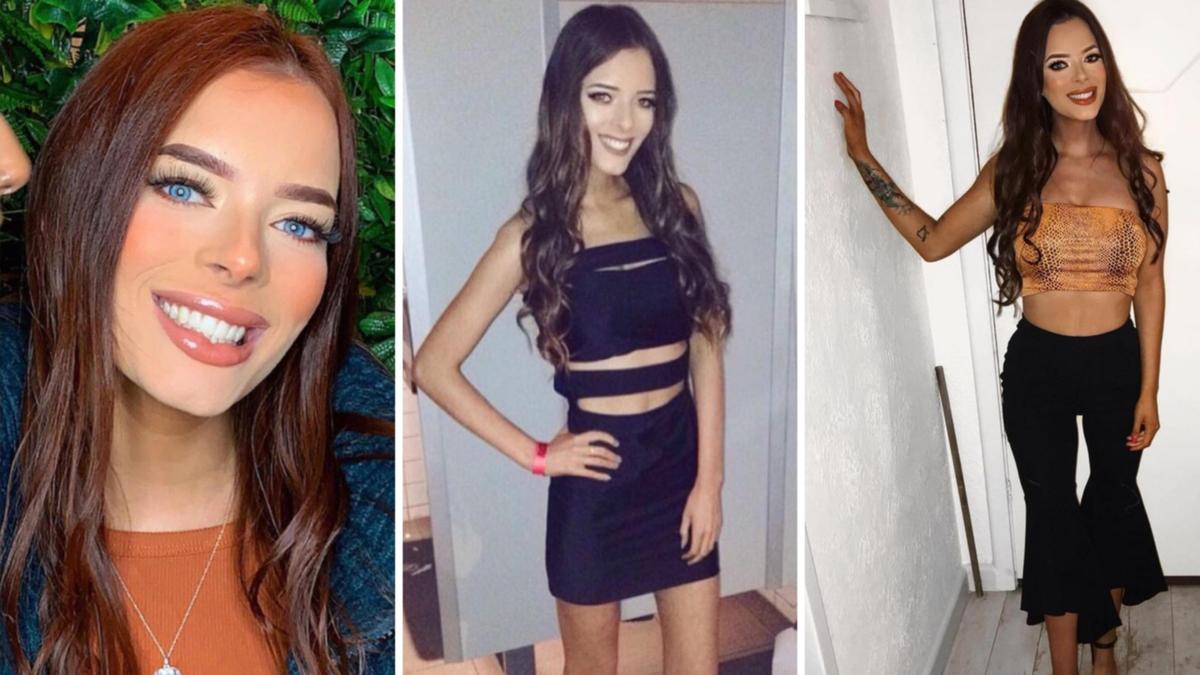 Jade Wright was just 15 years old when she developed anorexia.

The Melbourne woman was so consumed by her eating disorder, she spent a decade of her life calorie counting and restricting her diet.

“My battle with anorexia has been an extremely traumatic one,” Jade, now 26, tells 7Lifestyle.

“I had to drop out of school and to be honest, I don’t recall much of my life from the years of 15 to 25, as I was simply too unwell and under the control of my eating disorder.

“Anorexia took my life away from me.”

Born as a premature baby at birth, Jade says she was always thin – but she developed the eating disorder after the near-death of a family member during her childhood.

During her excruciating battle, she was so fixated on restricting her food intake, she even refused to drink water.

“I became terrified of even drinking water, with the thought or action of consuming any solid or liquid becoming debilitating,” she says.

“Restriction is definitely the main issue I had. I still struggle to eat some foods and often in moments find I unknowingly restrict based off a decade habit.”

As her condition deteriorated, Jade – who was in and out of hospital more than 20 times – said she found herself either hospitalised or too unwell to leave the house.

Eventually, she recovered enough to begin eating regularly again from the age of 22.

But three years later, Jade relapsed during the first lockdown in Melbourne in early 2020.

“I went back to square one. Eating disorders thrive off isolation and control, so when I was isolated and had no control around me, I turned to my old safety of anorexia,” she says.

“However I realised during this time that this was no longer a life I wanted to live. I was miserable. I was slowly killing myself, for what? To make a voice in my head happy? I thought to myself, no way.

“I already lost 10 years of my life to anorexia, I refused to lose anymore.”

And so she found the strength overcome the eating disorder.

“What makes me fight everyday is that, a want for a better life. I want happiness, I want contentment, I want to be able to live a life on my own terms, not on the terms of a voice in my head that holds no power,” she explains.

“I remember hearing ‘a thought is not a fact’ and I started to use that in my recovery. When anorexia would tell me I was disgusting for eating a meal, I would think to myself ‘okay where is the evidence behind this?’ and 10 out of 10 times there was never any truth behind the words.

“Thoughts only hold power if you let them and I decided one day to hold all the power. Anorexia telling me I’m fat for eating? Thought. Eating because I want to be alive and happy? Fact.”

Although the road to recovery has been tough, Jade has remained committed.

“It’s been over a decade of having an eating disorder, a decade of my life lost… and I refused to lose anymore,” she says.

“I still struggle daily, I will admit. Every meal is paired with fear and a million negative thoughts, but each day it gets easier and I know one day, it will all be worth it.

“I want to use everything I’ve been through and do some good and I know I can’t do that while allowing my eating disorder to take my joy and life.”

Looking back at old pictures of herself, Jade says she feels nothing but sadness for her younger self.

“Now I see pictures of myself and I‘m happy. This girl is full of life, love, happiness, joy, contentment, passions… she is thankful to be alive and that old version would have never thought this to be possible; but it is.”

By speaking out about her eating disorder, she wanted young women to draw hope from her experiences.

“When I was in the darkest parts of my eating disorder, I felt so alone. I felt judged, unheard, isolated and scared,” she says.

“I decided to always be open about my struggles because I know one person out there might feel the way I did, and if I can provide an ounce of support to that person reading my story – then they know they aren’t alone and that is so powerful against an eating disorder, because they convince you no one understands you, but I do.

“I always believed that the stigma behind eating disorders and mental health was something I wanted to fight against, my voice was quietened for a decade, it’s time to use it.”

“You just need to trust that one day, it won’t be this hard and one day, you will be okay, and you don’t need a voice in your head to decide that for you; you hold all the power in your life.”

If you need help in a crisis, call Lifeline on 13 11 14. For further information about depression contact beyondblue on 1300224636 or talk to your GP, local health professional or someone you trust.