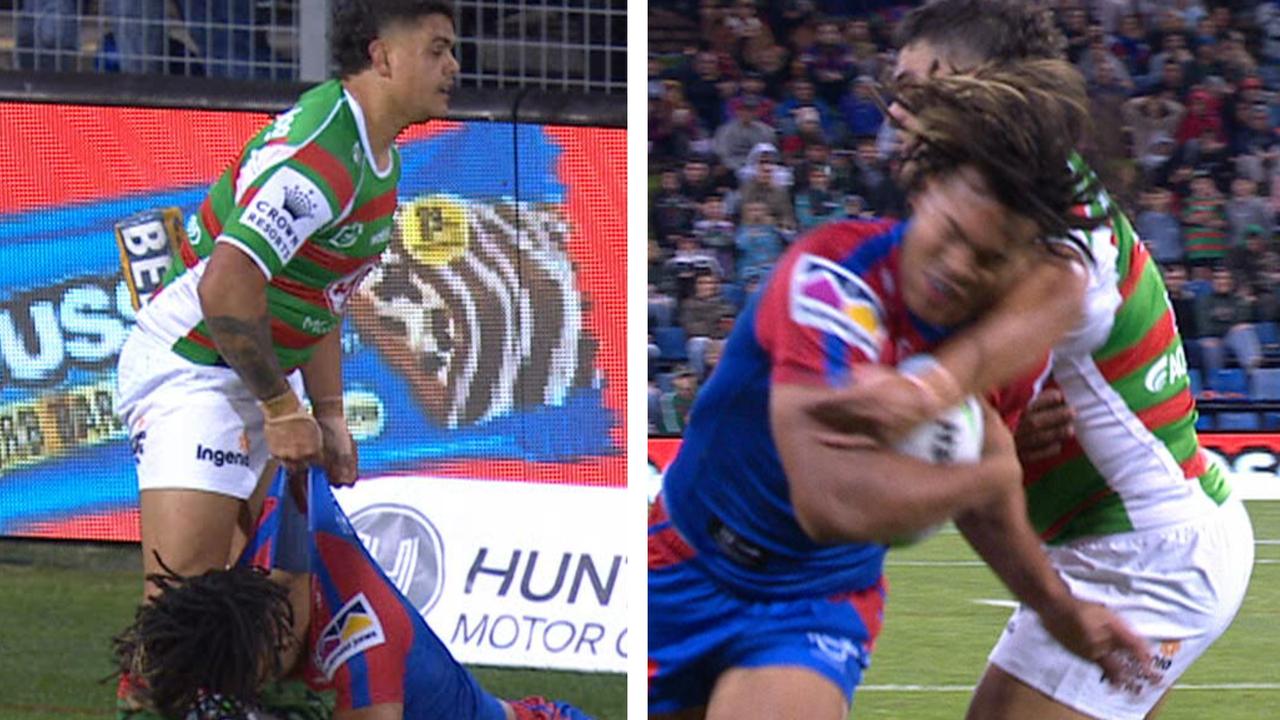 Souths star Latrell Mitchell could be in hot water after being placed on report for a high shot on Knights winger Dominic Young and then proceeding to lift the injured player off the ground.

In the 18th minute Mitchell produced a try saver on Young, who stayed down after being collected high.

Mitchell then proceeded to lift Young up off the ground believing he was not injured.

“Mitchell wanted him to get up immediately.

“Young tried to put on that footwork again and get on the outside and Mitchell was having none of it.

“What is that left arm doing there? Is it collecting Young high? Probably.”

Roach predicted Mitchell would be placed on report over the incident.

“I think he has,” Roach said of Mitchell collecting Young high.

TRANSFER WHISPERS: Dolphins up offer in fight for Milford, Knights star to extend

“That is why he stayed down. I reckon he will be put on report for that too. It has hit him flush.”

Mitchell was involved in a verbal altercation with Young and Knights prop David Klemmer in the aftermath of the tackle.

“That is going to be a penalty,” Ginnane said.

“That’s why Latrell was trying to get him to hurry up and play it.

“Latrell is just giving it to the young man.”

However, Roach conceded that Mitchell didn’t have much option with the try line begging.

“There is nothing he (Mitchell) can do there really,” Roach said.

“You have got to do your best to make that tackle on a man who has just scored a couple of minutes ago.”

“The contact is to the head, it is on report,” Smith said.

“What am I meant to do?” Mitchell replied.

Ginnane believes Mitchell’s lack of football and clean record in 2022 could work in his favour with the match review committee.

“He hasn’t been charged yet this year Latrell Mitchell,” Ginnane said.

However, Mitchell does have a fair rap sheet dating back further in his career and will be sweating on the match review committee’s decision.