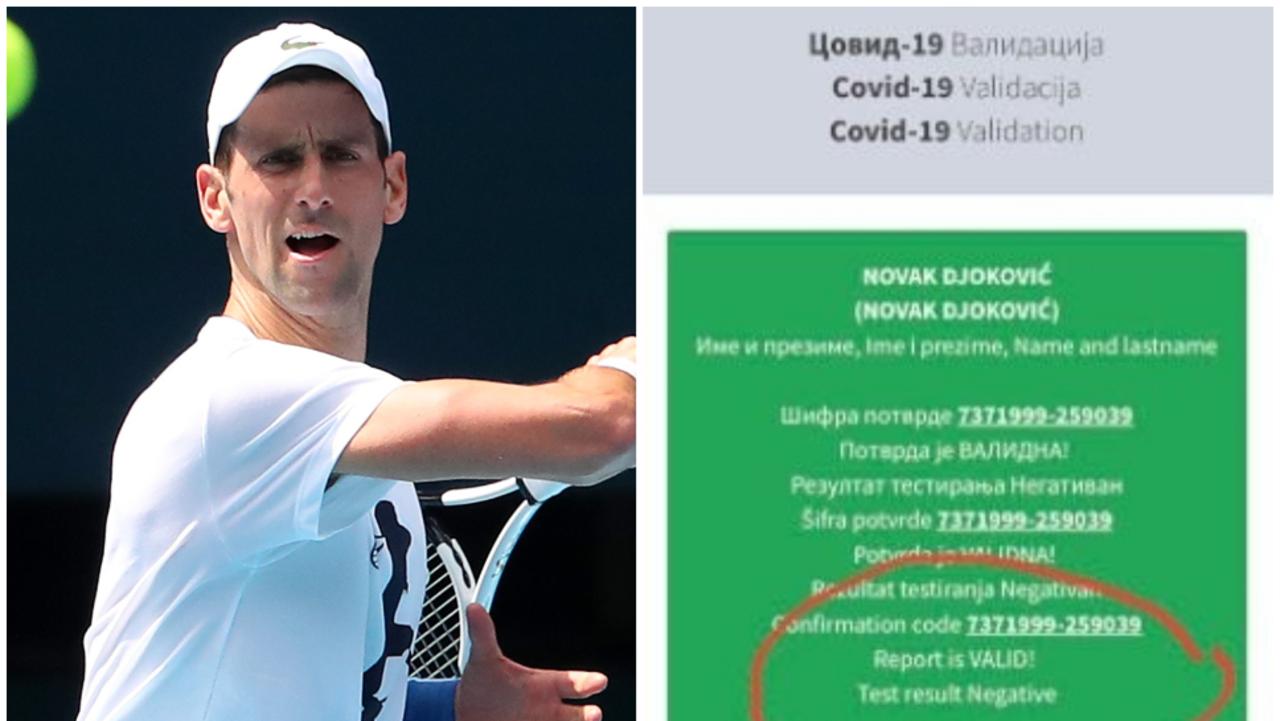 A bombshell report from a German news outlet has raised questions over the validity of Novak Djokovic’s Covid test results.

Just an hour later, however, when journalists from Der Spiegel checked again, it read as positive.

Djokovic has relied on that positive test result to show he has grounds for an exemption to having to take the Covid vaccination under conditions of entry set out by the Australian Govnerment.

The publication then looked into the digital reference numbers of the initial positive test result and a follow up test on December 26 in which Djokovic returned a negative result and was thus able to to show the Australian government he had recovered from the virus.

The test timestamped 1.05pm on December 16 was issued a reference number

Der Spiegel reports this would indicate the test was recorded before the first “positive” result on December 16.

Djokovic. meanwhile, has broken his silence on reports he he mixed with the public in Serbia without a mask despite testing positive to Covid.

Court documents showed Djokovic tested positive on December 16 but the day after he reportedly attended an awards ceremony at the Novak Tennis Centre in Belgrade, where multiple photos on social media show the 34-year-old posing for photos with children without wearing a mask.French newspaper L’Équipe also revealed Djokovic posed without a mask during a photo shoot on December 18.

“I want to address the continuing misinformation about my activities and attendance at events in December in the lead up to my positive PCR Covid test result,” he posted.

“This is misinformation which needs to be corrected, particularly in the interest of alleviating broader concern in the community about my presence in Australia, and to address matters which are very hurtful and concerning to my family.”

THE SINGLE ANSWER THAT COULD DERAIL DJOKOVIC’S OPEN BID

Novak Djokovic’s bid for an unprecedented 21st singles Grand Slam title at the Australian Open could hinge on a single answer he gave on a visa form — had he travelled in the fortnight before his arrival?

The 34-year-old is reported to have ticked the box saying ‘no’ but social media posts and reports appear to show the Monte Carlo resident was in the Serbian capital Belgrade and then Marbella in Spain in the 14 days leading up to his departure for Melbourne.

With the Australian government bruised after losing to Djokovic in the courts on Monday over revoking his entry visa, Immigration Minister Alex Hawke has said he could yet deport the men’s world number one.

‘Embarrassed as an Aussie athlete’: Kyrgios’ swipe at media amid Djokovic ‘sh*tstorm’

He would have reason to do so if Djokovic is found to have lied on his entry form.

The travel document clearly spells out that “giving false or misleading information is a serious offence” and can result in being barred from Australia for three years.

The question Djokovic replied ‘no’ to on his visa application was: “Have you travelled, or will you travel, in the 14 days prior to your flight to Australia?” Djokovic was pictured in Belgrade on December 25, with Serbian handball player Petar Djordjic. The photograph appeared on Djordjic’s Instagram page.

There then appears to be incontrovertible evidence he travelled to Spain for the New Year period.

On January 2, Djokovic was pictured by the Diario Sur local newspaper playing at the Puente Romano club in Sierra Blanca, Marbella, where he was staying in a villa.

On December 31, the SotoTennis academy also tweeted a video of Djokovic training in Marbella.

“We can confirm that Novak Djokovic is ready for the Australian Open if possible,” the academy tweeted — at the time Djokovic had yet to commit to competing in Australia.

Djokovic then arrived in Melbourne on January 5, having been given an Covid-19 exemption by organisers, only to have his visa was cancelled, beginning the legal fight that ended when a judge overturned that decision on Monday.

Even before that potentially crucial two-week window, the unvaccinated Djokovic was seen in Belgrade after he claims he tested positive for Covid-19 — the basis for the exemption — on December 16.

His public appearances in Belgrade after the positive result led to a testy exchange at a press conference the Djokovic family gave on Monday.

Asked by a journalist, his brother Djordje confirmed Novak had tested positive on December 16.

The next day he was at the launch of a Serbian stamp bearing his image and also appearing unmasked beside youngsters in Belgrade when apparently infected.

When the same reporter followed up by asking “Was he out in public on December 17 while infected?” Djordje pulled the curtain down, saying: “The press conference is adjourned.” Since leaving the Melbourne immigration detention facility on Monday, Djokovic has carried on as if everything is normal in practising ahead of the tournament that begins next Monday.

But it remains to be seen whether these videos result in his next ace being in Australia or farther afield.

DJOKOVIC HAS ‘NO RIGHT’ TO BE IN AUSTRALIA

Wimbledon quarter finalist and Marton Fucsovics has spoken publicly to openly criticise Djokovic and his bid to defend his Australian Open crown.

The world no. 38 said Djokovic, like all tennis players, were made aware of Australia’s strict reulations months ago.

“People’s health is paramount, and there are rules that were outlined months ago, namely that everyone should vaccinate themselves – and Djokovic didn’t,” he said.

“From this point of view, I don’t think he would have the right to be here.”

He’s not the only player to call out Djokovic.

British great Andy Murray meanwhile called on Djokovic to come clean over the outstanding questions relating to his botched visa documentation while Portugal’s Joao Sousa spoke out on the double standards that have allowed the defending champion to “find a way around (anti-vaccination) rules”.

“I respect that he fights for what he believes and I can be empathetic with what he is going through in Australia, but it’s a bit selfish from him to arrive here as the only player unvaccinated,” Sousa said.

“It’s tough for us players to accept that.

“Many players – not my case – didn’t want to get vaccinated and were forced to do it to be able to play tournaments. He is finding a way around those rules.”

It comes amid reports of tension between the Serbian star and his fellow players.

“[Djokovic] came to the gym before his hit. The place went silent with everyone staring. Talk about uncomfortable.”

Mother of Novak Djokovic, Dijana, has made a desperate plea to the federal government to allow her son to stay and play in the Australian Open.

“I’m very worried,” Dijana said on Sunrise. “I realise this is not over yet. We are all praying that he will stay and he will play.”

Djiana said the fact Immigration Minister Alex Hawke can decide to detain her son again isn’t “fair” after a judge allowed him to enter Australia.