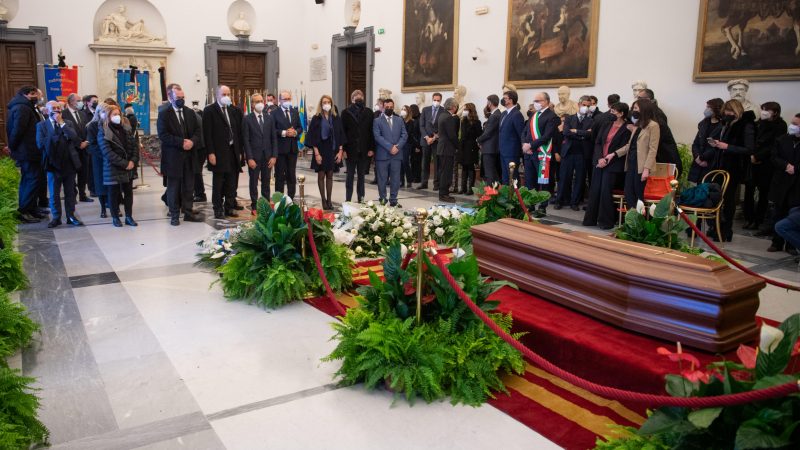 Italian politicians joined ordinary citizens on Thursday (13 January) to pay their respects to European Parliament President David Sassoli, who died this week and whose coffin was placed in Rome’s town hall ahead of a state funeral.

Hundreds of people queued patiently on a brisk winter’s day to enter the hall where Sassoli’s wooden coffin was laid out, surrounded by floral wreaths.

Italian President Sergio Mattarella and Prime Minister Mario Draghi were among the first to pay homage to Sassoli, who died in a cancer clinic in north-eastern on Italy on Tuesday aged 65.

“I am here because David Sassoli represents good politics, the human face of Europe,” said Rome resident Donatina Persichetti. “He was one of us and that is why we loved him and why his death hurts us so much.”

Sassoli spent weeks in hospital after contracting pneumonia last September and had to return to hospital in December after suffering complications related to his immune system.

Born in Florence on 30 May 1956, Sassoli studied political science before working as a newspaper and news agency journalist.

The father of two began working for national broadcaster RAI in 1992, rising through the ranks to become a familiar face for millions of Italians, presenting the evening news on the main channel, of which he also became deputy director.

He had been president of the 705-seat EU parliament since July 2019 and his term in the predominantly ceremonial role had been due to end this month.

Good-natured Sassoli earned the parliament’s respect with his sense of organisation, his team’s attention to teleworking, a remote voting system, and his ability to resist French pressure to bring elected officials back to Strasbourg.

In a sign of solidarity during the pandemic, he made the deserted parliamentary premises available to prepare meals for families in need and test for COVID.

His funeral will be held on Friday at Rome’s Basilica of St. Mary of the Angels and of the Martyrs. European Commission President Ursula von der Leyen and European Council President Charles Michel are both expected to attend the service.