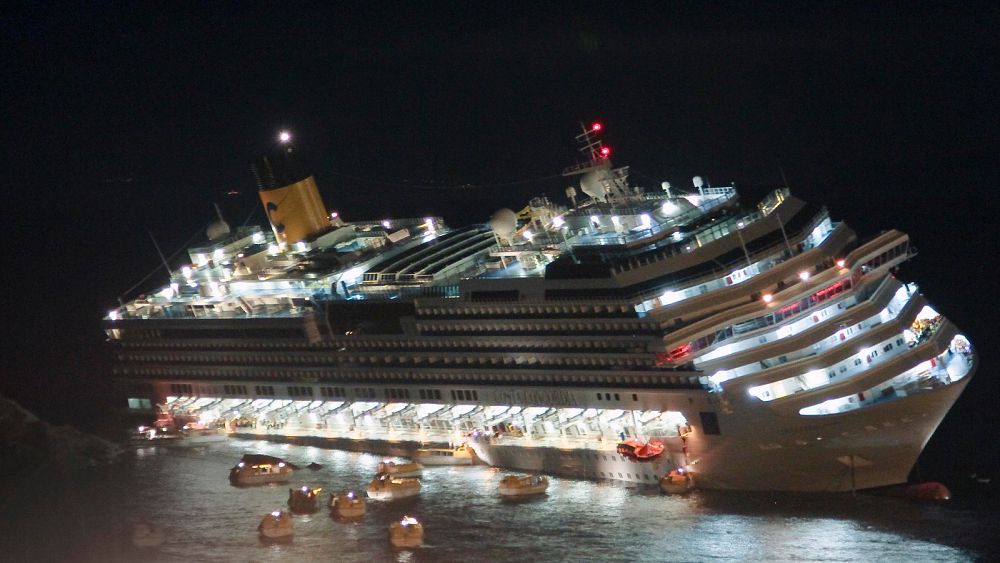 Italy will mark the 10th anniversary of the Costa Concordia cruise ship disaster on Thursday with a daylong commemoration.

Thirty-two people died when the ship slammed into a reef and capsized off the Tuscan island of Giglio.

The events will end with a candlelight vigil at 9:45pm when the ship hit the reef.

It will also honour the 4,200 survivors and the residents of Giglio who took in passengers and crew, offering clothes and shelter until passengers could return to the mainland.

“For us islanders, when we remember some event, we always refer to whether it was before or after the Concordia,” said Matteo Coppa, who was 23 and fishing on the jetty when the darkened Concordia listed toward shore and then collapsed onto its side in the water.

“I imagine it like a nail stuck to the wall that marks that date, as a before and after,” he said, recounting how he joined the rescue effort that night, helping pull ashore the dazed, injured and freezing passengers from lifeboats.

The boat would stay off the coast of the island for another ten years until being removed in 2014.

The sad anniversary comes as the cruise industry, shut down in much of the world for months because of the COVID-19 pandemic, is once again in the spotlight because of virus outbreaks that threaten passenger safety.

For Concordia survivor Georgia Ananias, the COVID-19 infections are just the latest evidence that passenger safety still isn’t a top priority for the cruise ship industry.

“I always said this will not define me, but you have no choice,” Ananias said in an interview from her home in Los Angeles, Calif. “We all suffer from PTSD. We had a lot of guilt that we survived and 32 other people died.”

Prosecutors blamed a delayed evacuation order and conflicting instructions given by crew for the chaos that ensued as passengers scrambled to get off the ship.

The captain, Francesco Schettino, is serving a 16-year prison sentence for manslaughter, causing a shipwreck and abandoning a ship before all the passengers and crew had evacuated.

Ananias and her family declined Costa’s initial $14,500 compensation offered to each passenger and sued Costa, a unit of US-based Carnival Corp., to try to cover the cost of their medical bills and therapy for the post-traumatic stress they have suffered. But after eight years in the US and then Italian court system, they lost their case.

“I think people need to be aware that when you go on a cruise, that if there is a problem, you will not have the justice that you may be used to in the country in which you are living,” said Ananias, who went onto become a top official in the International Cruise Victims association, an advocacy group that lobbies to improve safety aboard ships and increase transparency and accountability in the industry.

Costa didn’t respond to emails seeking comment on the anniversary.

Cruise Lines International Association, the world’s largest cruise industry trade association, stressed in a statement to The Associated Press that passenger and crew safety was the industry’s top priority, and that cruising remains one of the safest vacation experiences available.

“Our thoughts continue to be with the victims of the Concordia tragedy and their families on this sad anniversary,” CLIA said. It said it has worked over the past 10 years with the International Maritime Organisation and the maritime industry to “drive a safety culture that is based on continuous improvement.”

For Giglio Mayor Sergio Ortelli, the memories of that night run the gamut: the horror of seeing the capsized ship, the scramble to coordinate rescue services on shore, the recovery of the first bodies and then the pride that islanders rose to the occasion to tend to the survivors.

Ortelli was later on hand when, in September 2013, the 115,000-ton, 300-metre long cruise ship was righted vertical off its seabed graveyard in an extraordinary feat of engineering. But the night of the disaster, a Friday the 13th, remains seared in his memory.

“It was a night that, in addition to being a tragedy, had a beautiful side because the response of the people was a spontaneous gesture that was appreciated around the world,” Ortelli said.

It seemed the natural thing to do at the time. “But then we realised that on that night, in just a few hours, we did something incredible.”