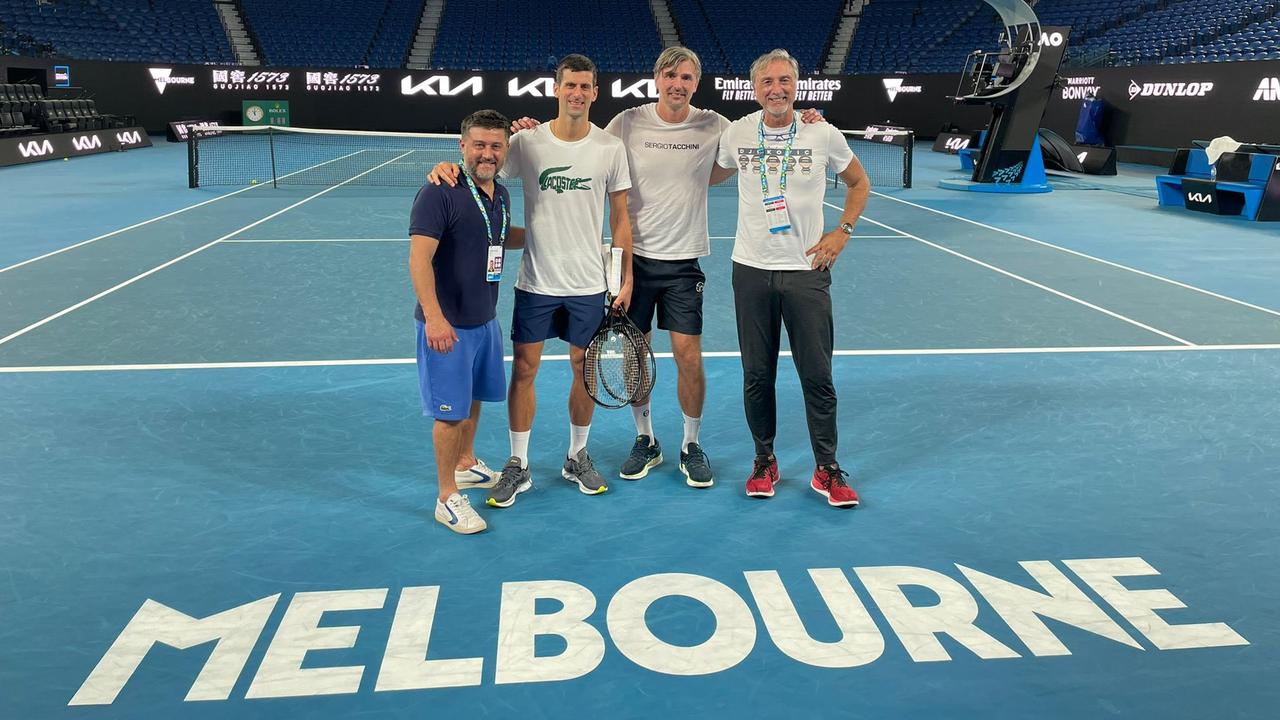 A grateful Novak Djokovic ended a chaotic day by boldly declaring his desire to stay in Melbourne and fight to claim another Australian Open trophy, despite being but through “torture”, according to his mother, while being detained in an immigration hotel.

After his hopes of winning a record-breaking 21st Grand Slam title received a major boost on Monday night, Djokovic used his first few moments of freedom to return to the tennis court for his first practice session since arriving in Australia.

The World No. 1 uploaded a photo of himself standing on the Rod Laver Arena court, along with his support staff, to his social media accounts hours after the cancellation of his visa was overturned by a Judge, which subsequently ended his five days of detention.

“I’m pleased and grateful that the Judge overturned my visa cancellation,” Djokovic wrote. “Despite all that has happened, I want to stay and try to compete @AustralianOpen I remain focused on that. I flew here to play at one of the most important events we have in front of the amazing fans.

“For now I cannot say more but THANK YOU all for standing with me through all this and encouraging me to stay strong.”

SHOCK TWIST: Why Novak could STILL be deported… and banned from Aus for years

Djokovic uploaded the picture from Melbourne in the early hours of Tuesday morning (AEDT) while his family fronted a packed room of reporters in Belgrade.

Djokovic’s brother, Djordje Djokovic, thanked the Australian legal system for “being fair and for being professional” amid fierce pressure.

He said he’d spoken with Novak prior to addressing the media.

“A few moments ago he trained. He was on a tennis court.

“He went to Australia to play tennis … to try to win another Australian Open and to win a record that he’s been chasing for so many years.

“He had all the documents that were required of him and, in the end, he got medical exempt, with which he travelled to Australia. The result of everything else that happened, we have found out today.

Djokovic’s mum, Dijana Djokovic, labelled the decision to permit her son to stay in Australia the biggest victory of his career.

But she claimed Novak had been subjected to torture and harassment”.

“We’re here to celebrate the victory of our son, of our Novak, who in his family learned not to put up with lies and cheating. He always fought for justice.

“He’s done nothing wrong, he hasn’t broken any of their laws and he was subjected to torture, to harassment … He fought against that system and against the government because he thought he had the right to be there with the visa that he got and he went there to win that tournament.

“Never before have we faced a situation like this. This was extremely difficult for us these five days or six days. We have tried to fight for him, to make sure that the voice is heard around the world. There’s been a spectrum of emotions: Sadness, fear, disappointment. There’ve been moments when he didn’t have his mobile with him, we had no idea what was happening.

“I want to thank everyone in the world who stood up and supported him. That’s the energy that helped him to fight in Melbourne in front of that so-called hotel.

“Our people gave him support and the singing and dancing, he could hear that – he couldn’t see it – and we all fought to show that the injustice has been done. Thank God there is still God, there is still justice in this world and on this planet and that justice has prevailed today and he has been freed, he has been released.

“I think this is his biggest win in his career. It’s bigger than any of the Grand Slams he has won.”