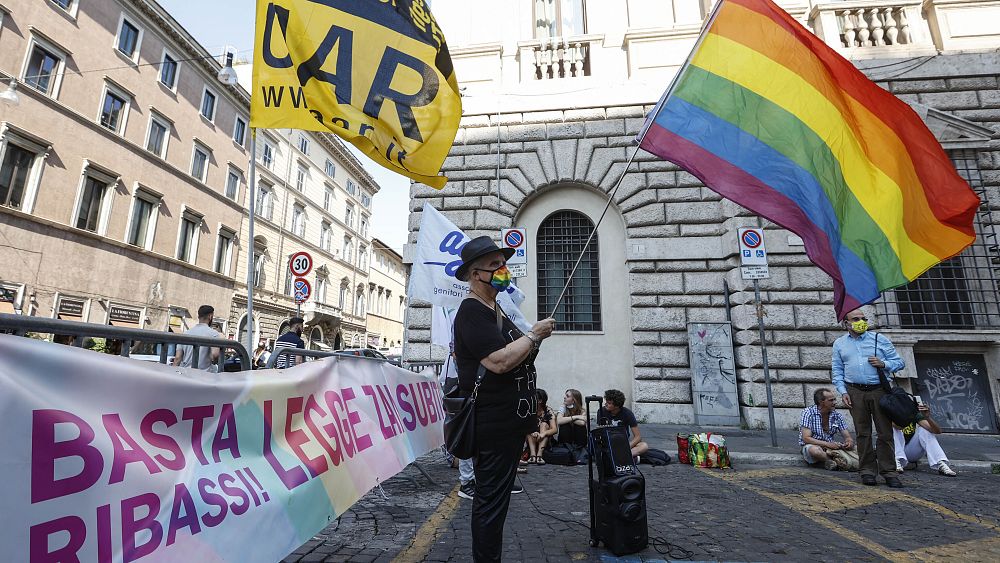 For many in Italy’s LGBT+ community, the rejection of a bill meant to ban discrimination has been viewed as a step backwards on the already-fraught road to equality.

Fabio Perna, a 33-year-old gay man living in the Northern Italian town of Rimini, said he was left feeling deeply distressed by the Italian Senate”s rejection of the legislation, called the “Zan bill”, on Wednesday.

“I was sitting with my partner on the sofa [when it happened] and we weren’t able to utter a single word. He simply looked at me and gave me a hug,” he told Euronews.

“Once again, they’ve deprived [people like] me of the chance of being recognised and protected as an equal to others.”

In Perna’s case, the result comes as a double blow. After suffering from acute myeloid leukaemia (AML) a few years ago, he is now bound to a wheelchair and finds himself dealing with a lifelong disability – another group of people that the Italian legislation had aimed to protect from discrimination.

“As a result of being disabled, it’s impossible for me to enter more than 50% of places like shops, restaurants, etc,” he said.

Perna shared his dismay on social media in the aftermath of the Italian Senate’s vote in a post that quickly went viral.

“I am gay and disabled which for my country means I don’t exist #ZanBill_Law_Straightaway,” he wrote.

Perna told Euronews that he sees it as important that his message be disseminated as widely as possible, with social media representing one of the key platforms to obtaining this goal.

“This Zan bill is necessary for someone like me who is gay in addition to already being disabled,” Perna concluded.

“I’m tired of feeling invisible in the eyes of my country, and I won’t stop raising my voice for myself and all others who are fed up of not being listened to.”

What’s inside the Zan bill and why was there controversy behind it?

The “Zan bill” had been introduced by its namesake, Italian MP Alessandro Zan from the centre-left Democratic Party in the lower house of parliament in May 2018, as a reaction to a growing wave of homophobic and transphobic attacks in the country.

At present, the section of Italy’s penal code that specifically outlaws hate crimes and discrimination – the “Mancino law”, dating back to 1993 – only explicitly mentions “racial, ethnic, national or religious” motives.

Among the Zan bill’s many proposals, it would have amended Italy’s penal code to ban discrimination on the grounds of sex, sexual orientation, gender, gender identity, and disability.

Acts of discrimination on such grounds could have landed offenders an 18-month prison sentence or a €6,000 fine. Violent crimes, instead, could have attracted four years of incarceration.

The bill passed the lower house of parliament in November 2020 but then faced significant challenges in Italy’s Senate. On Wednesday, a motion to block an Italian bill passed by 154 votes to 131 after a secret ballot.

Upon the announcement of the result, numerous senators broke into applause, in a scene that was described as “shameful” and “disgusting” by various politicians and commentators.

Many LGBT+ activists have taken to the streets and piazzas to express their disapproval.

But while the vast majority of LGBT associations in Italy have been fiercely supportive of the Zan bill, there are some outliers.

Emanuele, a 32-year-old jurist and gay man politically affiliated with the right, was opposed to the bill and breathed a sigh of relief upon its rejection in the senate.

“We’ve overcome the danger of introducing the crime of having an opinion within our legal system, allowing for a judge to exercise discretion,” he stated. Opponents of the bill frequently criticised its fourth article as an attack on freedom of speech, which its supporters deny.

Emanuele added that it was a “great occasion… for a debate between parliamentary factions and to reach a balanced synthesis.”

‘We will keep on fighting’: LGBT activists on the offensive

Disturbed, but not deterred, by Wednesday’s result is Monica Romano, a town councillor in Milan, who sees the bill’s defeat as related to contempt for transgender people like herself.

“The bill was rejected primarily (albeit not solely) for transphobia,” Romano said. “They consider us to be inferior people, full stop. There’s no way around it, and they’re afraid that the right to one’s gender identity will become a universal right, as opposed to being seen as an illness needing a cure.”

Transphobic hate crimes remain widespread in Italy, which tops other European countries for the murder of trans people. For opponents of the bill, it was the reference to gender identity that stood as one of its biggest points of contentions, uniting conservative critics with radical feminists.

For activists such as Romano, the only solution is to protest publicly.

Since the law’s defeat, demonstrations have been occurring throughout Italy, namely in Rome and Milan.

“We won’t stop,” Romano pronounced. “We left our closets and we will throw down these ridiculous doors one day too. History does not stop in front of senators who didn’t even have the courage to have an open vote.”