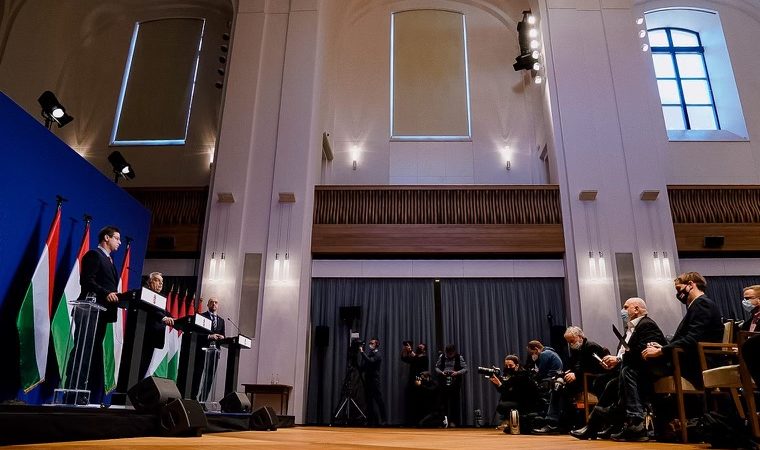 Hungarian Prime Minister Viktor Orbán on Tuesday (21 December) said the EU’s withholding of funds was “the most brutal sabotage” as he insisted his country would stick by harsh asylum rules.

Top EU officials have said Hungary — together with Poland — is unlikely to see a first instalment of billions of euros in EU pandemic cash this year as rows brew over its democratic credentials and treatment of asylum seekers.

The European Commission won’t approve Hungary’s recovery plan until it carries out judicial reform and guarantees that corruption cases are investigated, justice commissioner Didier Reynders said in an interview published on Tuesday.

The money is being held up as the two sides struggle to agree on the terms of the payouts.

Hungary has been asked to commit to anti-corruption reforms and provide better guarantees on judicial independence to get €7.2 billion in subsidies.

“The whole process, from the point of view of the unity and the future of Europe, is the most brutal sabotage. This is what shatters the EU,” Orbán told reporters during his annual press conference, which lasted more than three hours.

The nationalist premier, who faces elections next spring, accused the commission of wanting to unseat him by withholding the money.

He also insisted Hungary would stick by its hard-line migration rules, slamming the EU’s policies as “obsolete” in the face of “massive migration” since 2015.

“The reality is that we have to stop the migrants at the borders… This can be solved by one thing: changing the European asylum rules, but this process has not even started yet… I hope that in the meantime they will not fine us,” he said.

Earlier this month, Hungary’s constitutional court rejected a bid by Orbán’s government to challenge an EU court ruling against its harsh asylum policy.

The court however did rule that Budapest can act to protect Hungary’s sovereignty.

Budapest had asked the court earlier this year to review a ruling from the European Court of Justice (ECJ) that it broke EU law by allowing police to deport or physically “push back” asylum-seekers across the Serbian border.

The ruling is the latest chapter in a string of tussles that Hungary, like ally Poland, has had with Brussels over national laws that have also targeted LGBTQ people, independent media and civil society.

In the press conference, Orbán also announced that his Fidesz party plans to nominate Family Minister Katalin Novak to succeed current president János Áder, whose term expires next May.

To represent Hungary, to serve the whole Hungarian nation – I am preparing for this challenging task with faith, spirit and heart. I respectfully accept the nomination as President of #Hungary. I remain who I am. 🇭🇺 pic.twitter.com/3R7WVFFqR3