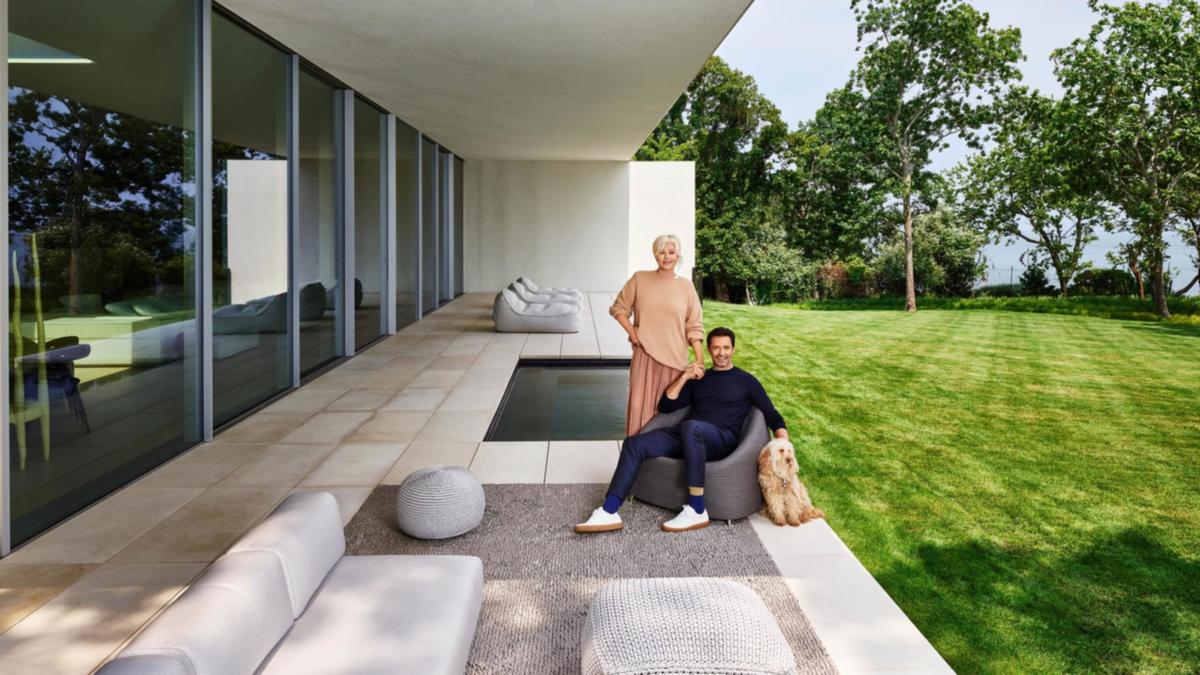 When Hugh Jackman and his artist wife Deborra-Lee Furness decided to build their dream home, it ended up being a project six years in the making.

Furness knew she wanted a minimal, modern beach house to share with her husband, their two children and two dogs – a home inspired by the pair’s travels across the world.

Opening the doors to the tranquil home for the December issue of Architectural Digest magazine, Furness recounted the couple’s long search for a place to fulfill her “lifelong dream” of building a house.

“I’m a bit of a commitment-phobe,” she is quoted as saying.

“I spent years looking for a space, but then a girlfriend told me about this property.

“We had rented down the street, so we knew the area. And it is right on the bay.

“The water was so still, and I loved the feeling.”

Once they had secured the property, which was then just “a little artist’s shack,” the couple turned to architect Viola Rouhani and interior designer Eleanor Donnelly – whom Furness met at a party thrown by Calvin Klein – to bring their vision to life.

“It had good bones, but it was from the ‘70s, and it was all stone tiles,” Furness said, describing the structure prior to its renovation.

“I thought, ‘Oh, my God, how can I transform this without pulling it down?’”

The outdated fittings have since been scrubbed from the home, which now features calming pale wood interiors, a marble-effect kitchen island and bathroom, and a contrasting stark black exterior that stands out against the landscape.

Furness said the family calls it the “Black Shack,” adding that the lack of colour throughout the space was intentional.

“The house is very monochromatic,” she told the magazine.

She also described the design layout, which sees a kitchen situated in the middle of the living room, as “unusual.”

“I was at almost every meeting over five years,” he told Architectural Digest.

“I felt I would know what it would feel like to walk in for the first time.

“I was wrong. The home so far exceeded my expectations.

“I didn’t realise what Deb created was not only beautiful but warm.

“Even now, when I walk in the door, it gives me a feeling of calm.”

Furness created calming spaces throughout the home, from a bathtub gazing out over the horizon to a living room spot she called the “look-out-to-the-sea, pondering-your-own-navel moment(s).”

(She explained, “Hugh and I are complete backgammonophiles, so the backgammon set lives there.”)

Amid the minimal design touches are a few surprises, including an LED kaleidoscopic artwork by James Turrell that shines into the lounge and a dizzying optical illusion wall, complete with a curiously shaped urinal, in one of the bathrooms.

“I love that we use every room, every day,” Jackman said.

“Because of Deb’s design, it brings us all together. When you have time off, you want to be a unit.”

“I know it’s an extravagance, but the house has got what we need.”