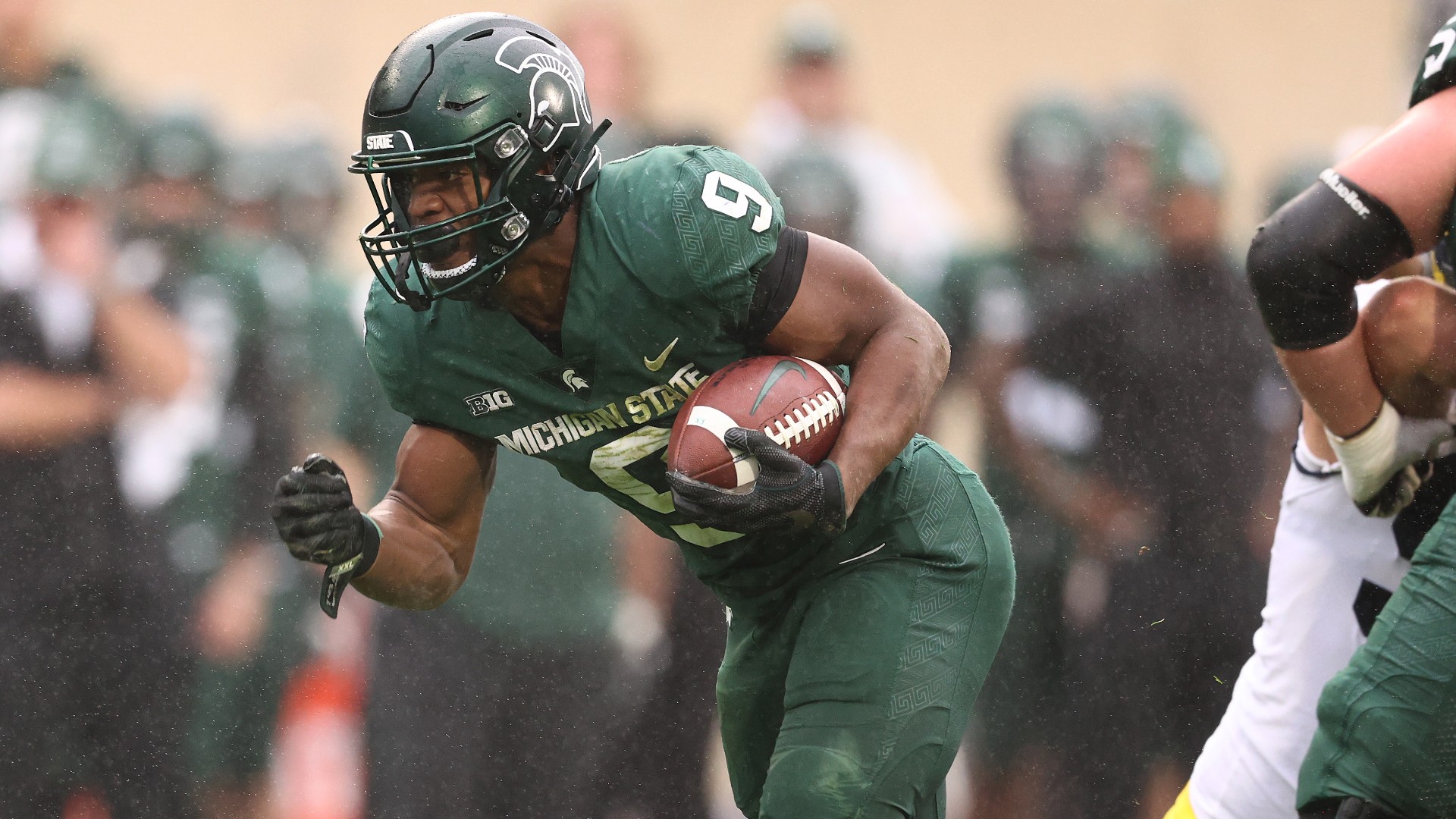 The nation’s leading rusher powered the Spartans to a 37-33 upset against Michigan at Spartan Stadium on Saturday with a remarkable performance.

Walker finished with 23 carries for 197 yards and five TDs. He scored on runs of 58 and 23 yards in a wild fourth quarter that will never be forgotten in East Lansing, Mich.

He ran his season totals up to 1,194 yards and 14 TDs, and two-thirds of the way into the season. Syracuse’s Sean Tucker has more yards with 1,267 along with 11 TDs, but Walker is on a College Football Playoff contender. That’s the difference.

“Kenny Walker, I don’t know what else I can say,” Michigan State coach Mel Tucker said afterward . “This is a huge stage, the whole world’s watching. You got a chance to see what type of player he is, and, obviously, any recognition that he’s getting, Heisman consideration, is well deserved.”

In the Big Ten, a conference that gave birth to smash-mouth football and “three yards and a cloud of dust”, that used to be the easiest path to the Heisman Trophy. Ohio State’s Archie Griffin remains the only two-time winner, and Wisconsin’s Ron Dayne (1999) is the conference’s last running back to win the award. Since 2000, seven Big Ten backs have finished in the top five in the Heisman voting. Here is a closer look:

Wisconsin’s Melvin Gordon had the highest finish and is one of three 2,000-yard rushers among those seven running backs. Walker is on pace for 1,791 yards and 21 TDs in a 12-game season, and there is a chance for another Heisman moment against Ohio State on Nov. 20. Ohio State has a Heisman hopeful at running back in freshman TreVeyon Henderson, but he is part of an offensive machine. Walker is the best player on his team, and he proved it against the Wolverines.

“Overall I don’t feel like it’s a Heisman moment,” Walker said in his press conference afterward. “But I feel like it was just a great team win.”

Walker proved Saturday he can carry his team to victory. If he can lead a Big Ten championship victory, then he could get close.

The rest of the Heisman field heading into November consists of — you guessed it — quarterbacks.

Young remains a make-sense candidate with a straightforward path ahead. He has the numbers with 2,453 passing yards and 26 TDs with three interceptions. He can lead Alabama to the SEC championship game by staying unbeaten in November. That would lead to the biggest possible stage in the SEC championship game against Georgia’s top-ranked defense. He also has the head-to-head victory against Corral and Ole Miss.

Corral’s Heisman hopes took a hit after the Rebels suffered a 31-20 loss at Auburn. Corral left briefly with an ankle injury, and he finished 21 of 37 passing for 289 yards with an interception while adding 45 yards and a rushing TD. The totals remain impressive with 2,202 passing yards, 519 rushing yards and 25 total TDs, but some of that shine has worn off because of the losses.

Stroud passed for 305 yards in a 33-24 victory against Penn State, and he remains on pace to be the third straight Ohio State quarterback to be a finalist. Since sitting out the Akron game because of a shoulder injury, Stroud averages 298.4 passing yards with 15 TDs and one interception. The Buckeyes still have high-profile games against Michigan State and Michigan, too.

MORE: Ohio State monster may prove too much for James Franklin

In Oklahoma’s last four games, Williams averaged 292.8 passing yards with 14 TDs and one interception, and he has 227 rushing yards and three TDs rushing. He might not have the full-season numbers, but if the Sooners win the Big 12 championship, the discussion will be had.

Hartman is this week’s senior feel-good story. He passed for 402 yards and three TDs in a 45-7 blowout against Duke. He has 860 passing yards and eight TDs the last two weeks. He has 2,475 yards, 23 TDs and three interceptions, and the Demon Deacons remain undefeated in the ACC. If Wake Forest can take a 10-0 record to Clemson in a few weeks, then that would provide the chance to make a statement.

Pickett’s is a statistical candidate from the ACC, but his chances took a hit in a 38-34 loss to Miami in Week 9. Pickett did put up a whopping 519 passing yards with three TDs and two interceptions in the loss that dropped Pittsburgh to 7-2. Pickett averages 344.4 passing yards per game with 28 TDs and three INTs. The senior will have to keep those big numbers coming to have a chance.

Here are the current Heisman odds according to FanDuel.com

When is the Heisman Trophy Ceremony

The Heisman will be awarded on Dec. 11, one week after conferences hold their conference championship games. Last year, because of the COVID-19 pandemic, the ceremony was held virtually and not until Jan. 5. This year, the ceremony is back to its normal date in mid-December.