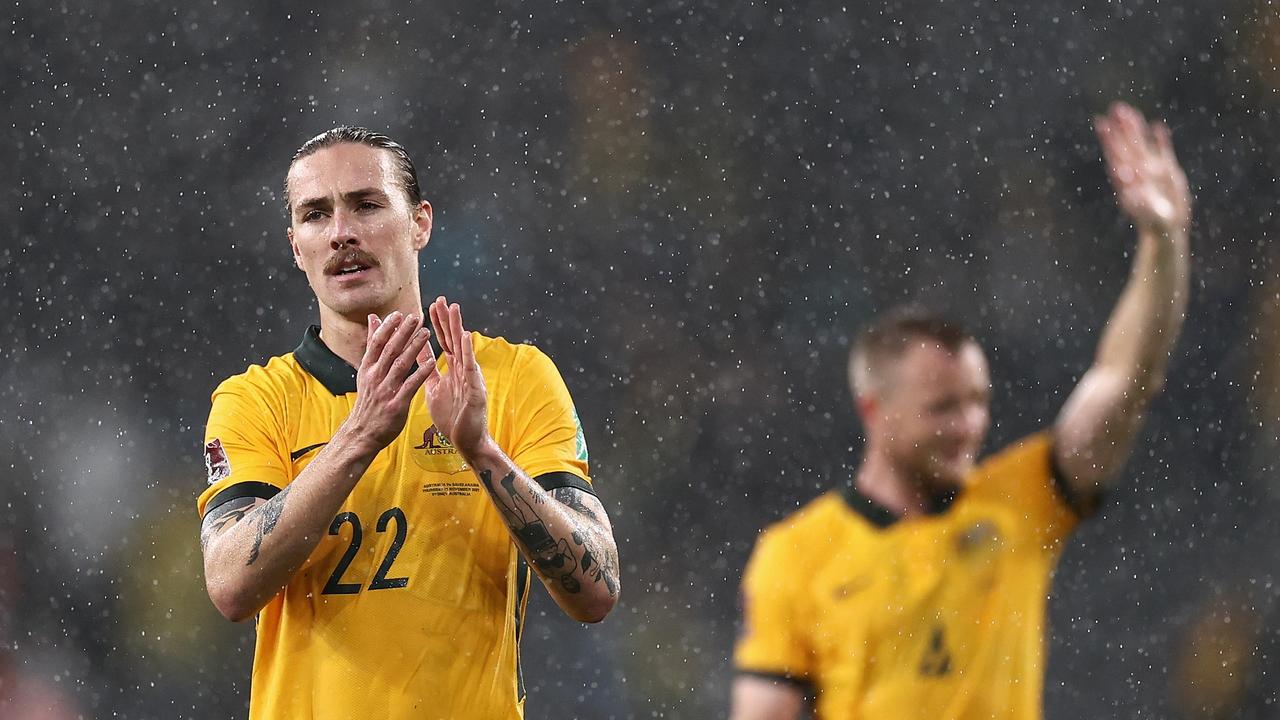 The Socceroos kept their World Cup qualifying destiny in their own hands by claiming a draw with Saudi Arabia on Thursday night, but the match arguably left Australia fans with more questions than answers.

That was particularly the case following an unfortunate and ‘serious’ knee injury to star centre-back Harry Souttar.

Can the Socceroos really match it with the best?

11 games, 11 wins. The Socceroos kickstarted their qualifying bid with an unbelievable run that matched the record for a single World Cup qualification campaign. But each of those came – no disrespect – against rather weak opposition. Japan tore that run to shreds in a 3-1 win where only Mat Ryan’s goalkeeping heroics saved the scoreline from being a blowout. And on Thursday Saudi Arabia – a team the Socceroos hadn’t lost to in 24 years – held Australia to a goalless draw which could easily have been a defeat given the Green Falcons’ ascendancy in the dying stages.

This isn’t time to panic for Graham Arnold’s men, at the halfway stage of the 10-game final round of qualifying for Qatar 2022. Destiny is still in their hands. But the key concern remains that the Socceroos have not yet found a way to outmatch the best in Asia.

Yes the conditions were poor on Thursday, and yes the Socceroos were missing three key players. But credit where it is certainly due, the visitors were fantastic at times on a soggy Sydney evening. They were well drilled by French coach Herve Renard, who previously became the first coach to win the Africa Cup of Nations with two separate teams (Zambia 2012, Ivory Coast 2015) before going on to guide Morocco to the 2018 World Cup, their first appearance in two decades.

Renard has turned the Green Falcons into a slick unit, put an end to the lack of mental fortitude that typically saw them slide out of games late, and has been rewarded with nine games unbeaten and top spot in Asia’s Group B. They are well and truly in the fight for Qatar 2022 qualification – which leaves the Socceroos on thin ice, with Japan cruising past Vietnam to move just one point shy of Australia on the ladder. The top two qualify directly, the third-place team via a series of knockouts against an Asian then an intercontinental nation.

For the Socceroos, China on Tuesday night (Wed. 2am AEDT) represents a perfect opportunity to bounce back. But it could all come down to the final two games of the Group stage in March next year: Japan on Australian soil, then Saudi Arabia away.

Arnold needs to prove the Socceroos aren’t just flat-track bullies. He’ll need to beat the best in Asia to seal Australia’s place in a fifth-straight World Cup. That’s just the way it should be.

How will the Souttar-less Socceroos cope?

A ‘serious’ knee injury to rising star defender Harry Souttar presents a major concern for Australia in the matches to come. More importantly, of course, is the 23-year-old’s wellbeing. It is a bitter blow to a young lad after a breakout couple of seasons has put him firmly on the shopping lists of a few Premier League clubs – especially with the January transfer window looming, and with four of the bottom five PL sides having already replaced their managers.

“At this moment I’m really down and devastated for Harry. I believe he’s the best centre-back in Asia and if it turns out to be a bad injury it’s a blow for Harry and a big blow for us.”

This was just Souttar’s second game on Australian soil in his 10 caps, and he had put in a sterling shift before being stretchered from the park in severe discomfort. Hopefully, scans set for Friday will only show a minor injury and he’ll be back in action soon. Fingers crossed.

If not, there are headaches over the defence. Souttar and the 50-cap veteran Trent Sainsbury have been developing a solid combination in the heart of the backline which proved crucial to Australia’s 11-game win streak. Both were again exceptional on Thursday.

When Souttar left the pitch, his towering six-foot-six presence left a gaping hole (rather literally) in the Australian defensive structure. At a nervous point in the game, the Socceroos couldn’t recover their solidity at the back. It’s not a promising sign ahead of a crunch clash with China. Aziz Behich rebounded from a nightmare showing in the Japan defeat with a decent performance against Saudi Arabia, while Rhyan Grant replaced Fran Karacic and showed plenty going forward. Milos Degenek is a fine defender – he has played in the Champions League and has 32 international caps to his name.

But he missed the last Socceroos camp due to Covid-19 and now has precious little time to reforge a defensive partnership with Sainsbury. If Souttar is indeed seriously injured, that duo could prove crucial to Australia’s chances of qualifying for the World Cup.

Why did Maclaren not play?

With Adam Taggart injured, there was plenty of doubt as to who would take the number nine role on Thursday. Among the contenders, Mitch Duke – a former Western Sydney Wanderer who had no shortage of goals at Western Sydney Stadium and has been well among the goals in recent games.

The 30-year-old marksman had played in seven of Australia’s eight games since qualifying resumed in June – scoring four goals in that time despite five of his seven appearances coming off the bench.

There was also Jamie Maclaren, coming off a 25-goal golden boot season for Melbourne City. Maclaren had not played competitively since June, but had put in plenty of work in pre-season ahead of the A-League Mens upcoming kick-off. Maclaren has six goals in his 18 caps – but all six came in his last 10 matches for the green and gold, including a hat-trick the last time Australia played on home soil.

And he was ‘hungry as ever’, he said before the game. “It does feel like one of the biggest games in my international career so far … I’ve always worked hard. I’m as hungry as ever. For me, it’s an honour to be here.”

It seemed that Maclaren was destined to feature, whether from the first whistle or off the bench. But he was stunningly left on the bench as his Melbourne City teammate Mat Leckie led the line in his 66th appearance. Perhaps Arnold was opting for experience – but his decision didn’t pay off. Leckie worked hard and showed moments of brilliance but should have scored in the second half when he was denied from a tight angle. Leckie also suffered a couple of poor touches in promising positions, though it’s easy to put that down to a slick ball in heavy rain. Duke also struggled to make an impact when he came off the bench to replace Leckie.

With the game on the line and Maclaren so desperate to make his mark – and equally deadly in the box – it was a shock to see him remain on the pine. That will undoubtedly change next week, when he’ll have the chance to prove to Arnold he’s fit and match-ready for the big occasions.