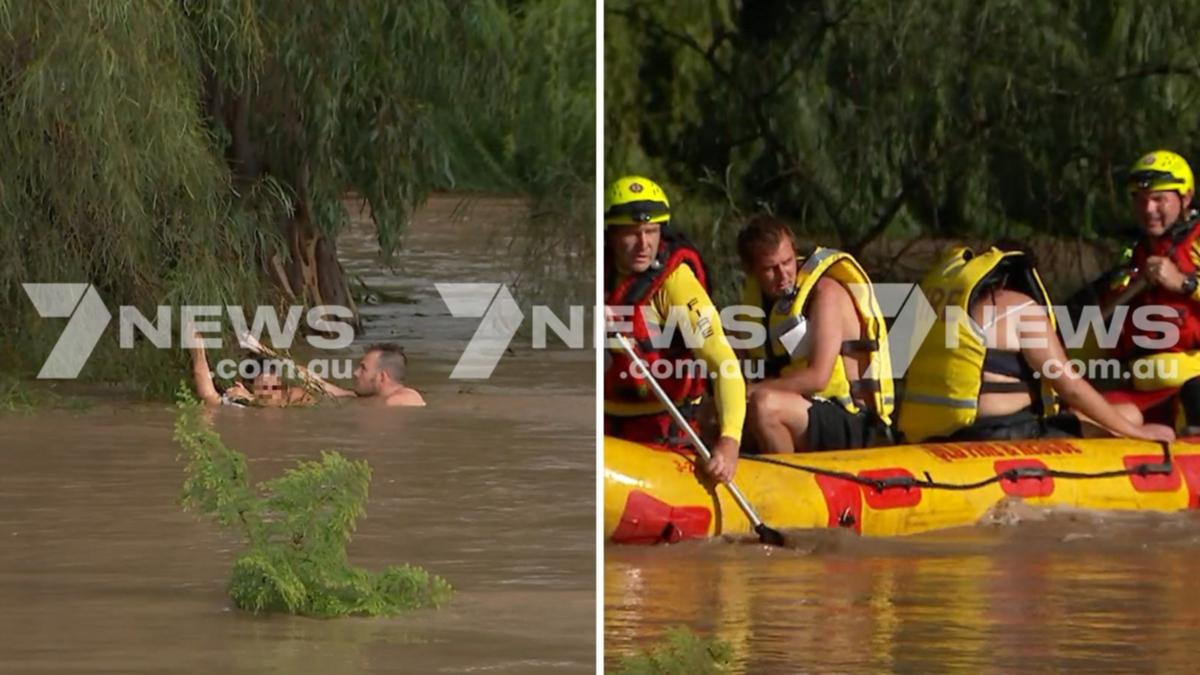 A girl who became stricken after jumping into Queensland floodwaters for a swim has been rescued.

In remarkable scenes that unfolded before a 7NEWS crew, a police officer stripped down to his underwear and jumped into the water to reach her.

The incident in Dalby on Wednesday afternoon has been among several swift water rescues throughout the past 24 hours.

The girl had attracted the attention of passers-by before emergency crews were tasked with her rescue.

The police officer and another man entered the water to help her.

The trio moved through the water before finding a tree to cling to.

They clung to a tree for an hour as the water in Myall Creek raged around them.

A swift water rescue crew arrived to firstly retrieve the two civilians, before going back to save the police officer.

Dalby locals applauded and cheered the police officer when he was brought to safety.

Authorities have been pleading with people not to enter floodwaters, with 12 swift water rescues in the 24 hours to midday on Wednesday.

A man became the second person to die in Queensland floodwaters in as many weeks on Wednesday, after his body was pulled his ute at Yalangur, near Toowoomba.

The 73-year-old was in one of two cars reported in the water at Kelvinhaugh Yalangur Road around 8am.

The driver of one vehicle was safely pulled from his car, however the 73-year-old man’s body was recovered from his ute after a lengthy search.

7NEWS filmed the rescue of a woman in Grantham as her car became trapped on floodwaters on a bridge in the early hours.

“We’ve had people aquaplaning on roads,” a rescuer told 7NEWS on Wednesday morning.

“It is difficult, with the water over the road at night time, to see.

“Everyone just take it easy.

“There is a lot of water. It’s over roads in lots of areas.”

On Tuesday, police fined a man $551 for driving into floodwaters after his dual cab became stuck in Alberta in central Queensland.

‘The man drove around ‘Road Closed’ and ‘Water Over Road’ signs that were situated along Baralaba Woorabinda Road,” police said.

“The man then tried to navigate his vehicle across more than 100 metres of water that was approximately 2 metres deep with a strong current.

“The dual cab was quickly swept off the roadway and fortunately became wedged against trees a short distance away.”

The man and his dog were rescued.

Southern Queensland remains on flood alert amid a continuing deluge that forced 900 people to be evacuated from Inglewood in the Goondiwindi region on Tuesday night.

At the nearby town of Yelarbon, 200 residents were evacuated on Wednesday with more communities on high alert.

Up to 180mm of rain fell in some parts of the state in 24 hours with more than 50 gauges recording 100mm in southeast Queensland alone.

More than 400 roads throughout the state were flooded.