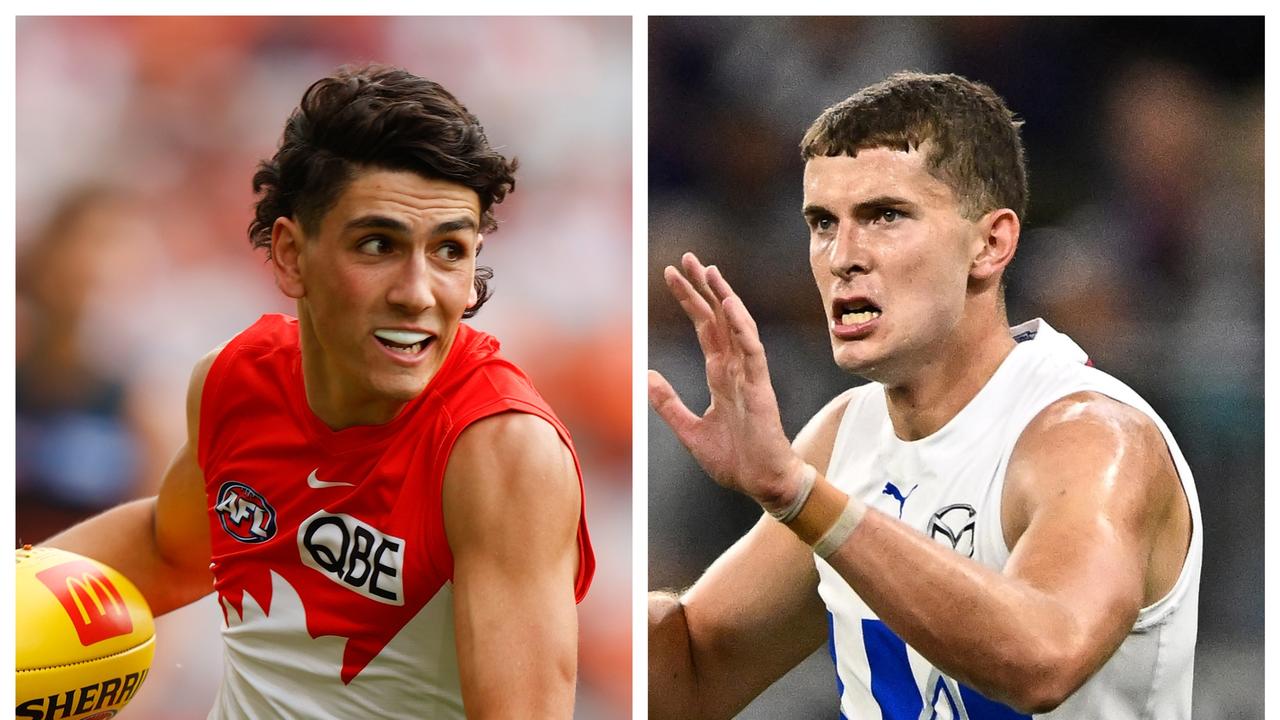 Sydney will be without Justin McInerney and Harry Cunningham for Saturday’s crunch game against St Kilda, with the pair entering health and safety protocols.

Dylan Stephens and Robbie Fox have been brought into the side to replace the duo, with Lewis Taylor and Will Gould the emergencies.

Elsewhere, in the finalised Sunday squads, North Melbourne recruit Callum Coleman-Jones has once again failed to make the final cut for the side’s best 22 as the Roos take on Adelaide Crows.

Patrick Dangerfield will be sidelined for another week, with Geelong to be without the superstar Brownlow Medallist for Sunday’s clash against Richmond.

The sense all week was Dangerfield would return from a calf injury for his first game since Round 10 – Cats coach Chris Scott on Fox Footy’s AFL 360 on Monday night indcated Dangerfield would play – but the veteran wasn’t named on the club’s team sheet on Thursday night.

“While we had been confident that Patrick would play on Saturday, the coaches and medical team had earmarked making a final call after Wednesday’s main training session and the decision has been made today to give him an opportunity to further build his football and training loads,” Geelong GM of football Simon Lloyd said.

“We have been open this season in our tailored approach to players returning from injury and will continue with this approach for the long-term benefit and preparation of the team.”

However Geelong welcomes back Jack Henry to face Richmond for his first game since reinjuring his foot in Round 5. Henry, Max Holmes and Gary Rohan all return to the Cats’ senior line-up, while Cooper Stephens and Luke Dahlhaus have been dropped and Zach Guthrie managed.

St Kilda has regained inspirational skipper Jack Steele for Saturday’s clash with Sydney, but there are three big outs.

Bradley Hill will miss due to personal reasons, Paddy Ryder has been managed and Jack Higgins has been dropped.

The Giants have named veteran Phil Davis, star midfielder Tim Taranto and mid-season draftee Wade Derksen in their extended squad to face the Pies. Davis hasn’t played since Round 2 when he suffered a serious hamstring injury, while Taranto could play his first game since Round 9.

Collingwood has added Trey Ruscoe, Caleb Poulter, Isaac Chugg and Aiden Begg to an extended squad for its clash with the Giants, with Jordan De Goey the only out after being granted personal leave by the club.

Essendon will welcome back utility Kyle Langford for his first game since Round 1, but will be without gun No. 1 pick Andy McGrath due to injury.

Langford, who was subbed out in the early stages of his side’s Round 1 loss to Geelong, returns to the team alongside Will Snelling, while Nick Bryan comes into the side to replaced fellow ruck Andrew Phillips who’s been ‘managed’.

Tim Kelly and Liam Ryan headline the inclusions for West Coast, but star duo Jeremy McGovern and Dom Sheed will miss through injury.

Hawthorn has confirmed a flurry of changes for its clash against the Western Bulldogs, with mid-season draftee James Blanck, gun forward Mitch Lewis and best and fairest James Worpel among the inclusions. Kyle Hartigan (omitted), Sam Frost (injured), Chad Wingard (injured) and Will Day (HS Protocols) are among the outs.

The Bulldogs have also been made to wait a little longer to re-call forward Josh Bruce from his ACL rupture following a separate setback at training this week.

The Dogs on Thursday revealed Bruce, who hasn’t played an AFL game since August last year, was experiencing hamstring tightness, which will delay his return to the senior side

“Having been in rehab for a long period of time, we don’t want to take any risks and he won’t play this weekend.

“We will assess Josh for the following week.”

Jordan Sweet and Hayden Crozier will face Hawthorn, with Taylor Duryea and Tim English ruled out with injury,.

North Melbourne will unleash the son of a club legend this weekend, with Jackson Archer to make his debut against the Adelaide Crows.

Archer, whose father Glenn Archer won two flags with the Kangaroos across his 311-game career and was named the club’s ‘Shinboner of the Century’, has earned his AFL debut after nine games in the VFL, including a 12-disposal performance against the Giants a fortnight ago.

The 19-year-old, who was taken as a father-son selection in last year’s draft, is one of six inclusions for the Roos, who’ve also named Tarryn Thomas, Cam Zurhaar, Ben McKay and Callum Coleman-Jones. Jason Horne-Francis will miss through suspension, while Jack Ziebell has been ruled out through injury.

Gold Coast will not only be without exciting forward Joel Jeffrey for Sunday’s clash against Port Adelaide but also for the rest of the season, with the 20-year-old having surgery on the lateral miniscus in his right knee.

Jeffrey, Connor Budarick and Wil Powell will all miss through injury.

Veteran Travis Boak is among six inclusions for the Power.

AFL ROUND 15 FIXTURE AND TEAMS (All times AEST)