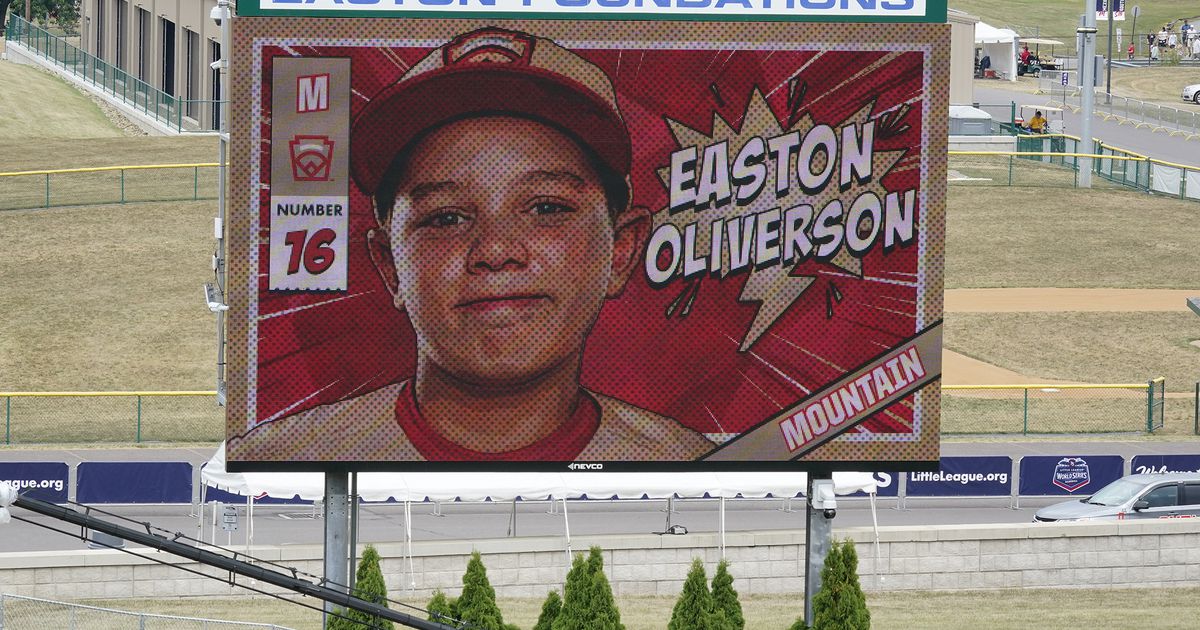 Easton Oliverson is back in Santa Clara after spending some time in a Salt Lake City hospital.

(Gene J. Puskar | AP) A picture of Mountain Region Champion Little League team member Easton Oliverson, from Santa Clara, is shown on the scoreboard at Volunteer Stadium during the opening ceremony of the 2022 Little League World Series baseball tournament in South Williamsport, Pa., Wednesday, Aug 17, 2022. Oliverson was injured when he fell out of a bunk bed at the dormitory complex.

The family of a Snow Canyon baseball player who fell off a bunk bed and suffered a serious head injury just days before the Little League World Series has filed a lawsuit.

Jace and Nancy Oliverson, are suing Little League Baseball Inc., and the company that made the bunk beds from which 12-year-old Easton Oliverson fell, PennLive reports.

The lawsuit, which was filed in a Pennsylvania court, reportedly claims that Little League Baseball “failed to equip the upper bunks with rails to protect its occupants, causing Easton Oliverson to fall.”

In August, the league admitted the bunk beds did not have guard rails. In response to Oliverson’s fall, the league removed the bunk beds from the dormitories in Willliamsport. Little League said last month that it is “unaware of any serious injuries ever occurring” since 1992, when the bunk beds were introduced.

The lawsuit also claims that the company that makes the bunk beds “sold ‘dangerous and defective’ bunk beds that ‘caused significant and permanent injuries to’ Easton,” per the article.

Oliverson fell off a bunk bed in Williamsport, Pa., and underwent surgery for his injury back on Aug. 15. In recent days, he had been recovering in a Salt Lake City hospital.

The boy returned home to Santa Clara for the first time since the fall on Monday night, per an Instagram account that regularly posts updates on his progress.

“He is resting and adjusting to his recovery away from the hospital,” the post said.

Oliverson received support from friends, BYU football players and several MLB celebrities — including his favorite player Mookie Betts of the Los Angeles Dodgers — and received a visit at the SLC hospital from new Utah Jazz coach Will Hardy.

Aside from the surgery, Oliverson has also been recovering from a staph infection in recent weeks.

“He is thrilled to be home, but understands that he still has a very long road ahead,” the Instagram post said. “It’s not going to be easy, but we have faith that his prayer army will continue to carry him through.”