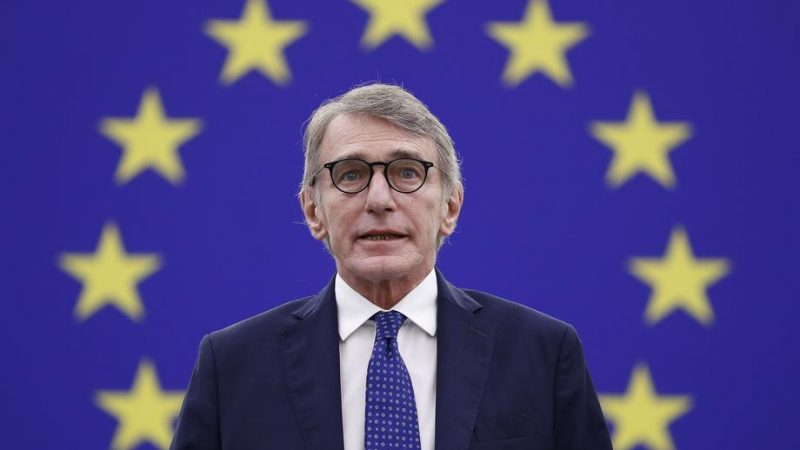 The president of the European Parliament, David Sassoli, died in the early hours of Tuesday (11 January) in hospital in Italy, his spokesperson announced on Twitter.

Sassoli, who was 65-years-old had been in hospital since 26 December, where he was being treated for dysfunction of his immune system. Before that, he had been admitted to hospital with pneumonia caused by Legionnaires disease, where he remained for several weeks.

His hospitalisation had been announced on Monday by Cuilo, who said his official duties would be cancelled. Sadly, Sassoli passed away at 1.15 am on Tuesday.

The @EP_President David Sassoli passed away at 1.15 am on 11 January at the CRO in Aviano( PN), Italy, where he was hospitalized. The date and place of the funeral will be communicated in the next few hours.

“David Sassoli passed away at 1.15 am on 11 January at the CRO in Aviano, Italy, where he was hospitalised,” Roberto Cuillo tweeted.

“The date and place of the funeral will be communicated in the next few hours,” he added.

Commission President Ursula von der Leyen said in a tweet she was deeply saddened by the passing away of “a great European and Italian”, a “passionate journalist”, an “extraordinary EP President”, and a “dear friend”.

The European Parliament sits for a five-year term between elections, but the body’s president serves for half that time. Sassoli had already indicated that he would not seek re-election.

Elected in 2019 as president, a role similar to that of a speaker in a national parliament, his two-and-a-half-year mandate was dominated by the coronavirus pandemic.

Good-natured Sassoli earned the parliament’s respect with his sense of organisation, his team’s attention to teleworking, a remote voting system, and his ability to resist French pressure to bring elected officials back to Strasbourg.

In a sign of solidarity during the pandemic, he made the deserted parliamentary premises available to prepare meals for families in need and test for COVID.

Health was his own Achilles heel, having recovered from leukaemia.

A heavy smoker, Sassoli was hospitalised in September 2021 due to pneumonia, which kept him away from parliament for several weeks.

On 26 December, he was hospitalised again with “a serious complication due to a dysfunction of the immune system”, according to his spokesman.

Born in Florence on 30 May 1956, Sassoli studied political science before working as a newspaper and news agency journalist.

The father of two began working for national broadcaster RAI in 1992, rising through the ranks to become a familiar face for millions of Italians, presenting the evening news on the main channel, of which he also became deputy director.

‘Nothing is possible without people’

His celebrity status meant he was elected MEP with a whopping 400,000 votes, catapulting him from Italian television screens to a new career at the European parliament.

Sassoli became head of the DP’s European group and briefly attempted to enter national politics as the party’s candidate in Rome’s mayoral primaries but was beaten by Ignazio Marino, who won the office.

Re-elected MEP in 2014, Sassoli became parliament’s vice-president in charge of the budget and Euro-Mediterranean policy.

“While in charge of this policy, I represented the European parliament at numerous official occasions, developing dialogue with institutions in Mediterranean and Middle East countries,” Sassoli wrote on his webpage.

After three years of complex negotiations, he was the joint author of the Sassoli-Dijksma European railway reform, which liberalised rail travel in 2017.

“I have not completely abandoned my journalist career. I still collaborate in an active way with various dailies and periodicals,” he wrote.

He co-wrote a book with Francesco Saverio Romano about the drama of cabinet meetings during the 1978 kidnap and murder of former prime minister Aldo Moro by far-left militants.

“If you put your trust in me, we will fight together for a parliament that is modern, more transparent, environmentally sound, accessible to citizens,” Sassoli promised fellow MEPs ahead of the vote on his nomination in 2019.

“Nothing is possible without people; nothing is durable without institutions,” he added, quoting one of the EU’s founding fathers, Jean Monnet.

His election as president of the European Parliament in 2019 had meant Italy kept one of the three key European jobs, following the departure of European Central Bank chief Mario Draghi and EU foreign policy chief Federica Mogherini.

His arrival in the chamber was traditionally announced in Italian as “Il Presidente”. Unlike some EU officials, who speak in English and French in public appearances, Sassoli had made a point of using Italian.

Next Tuesday, MEPs are expected to hold the first round of voting for his successor.