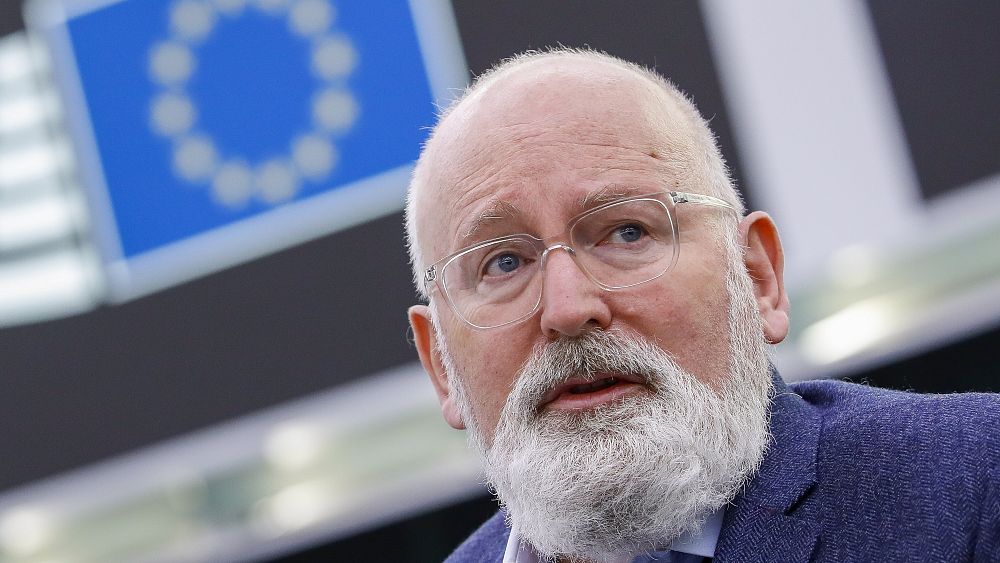 The European Union wouldn”t have a green deal to fight climate change in place if it weren’t for the role played by Swedish activist Greta Thunberg and the Fridays for Future movement, Frans Timmermans has said.

“She’s a hero. Absolutely. We would have no European Green Deal without her,” he told Euronews in a wide-ranging interview inside the European Parliament in Strasbourg.

Timmermans, who serves as the European Commission’s Executive Vice-President for the green deal, discussed the EU’s efforts to fight the climate crisis, warning of disastrous consequences if the ongoing green transition fails.

His gloomy predictions come in the aftermath of COP26, the high-stakes international summit that took place in Glasgow in early November and that Timmermans attended as the EU’s climate envoy.

Following days of intense back and forth and last-minute negotiations, the conference produced a deal that was both praised for its ground-breaking character and criticised for its tepid language.

India, backed by other coal-reliant countries, pushed to include a controversial amendment replacing coal “phase out” with “phase down”, a small verbal tweak with enormous implications.

Alok Sharma, the summit’s president, fought back tears when he publicly apologised for the unexpected change.

“It’s always difficult to reach a global deal in a COP. But, this time, we were more ambitious than many, many countries had anticipated before, and it took a bit to get everybody to cross that line,” Timmermans admitted, noting the summit’s final hours were “emotional”.

“The formulation used by the British presidency on coal was a bit much for some coal-producing countries. So we had to reformulate it, maintaining a high level of ambition, but using a couple of different words. Still, the writing is on the wall for coal, and that’s the most important thing.”

As part of the Glasgow deal, high-income countries commit to double their collective provisions of climate finance to help developing countries adapt to rising temperatures.

Notably, the text avoided any specific mention to the question of loss and damage, the monetary reparations that low-income and vulnerable nations demand for the irreversible destruction already wreaked by global warming.

The European Union and the United States joined forces to oppose creating a fund for such payments, fearing the scheme would make them subject to hefty, long-term compensation fees. Rich countries are responsible for the vast majority of greenhouse gas emissions released into the atmosphere since the birth of the industrial revolution.

Timmermans pushed back against criticism over the EU’s antagonistic position, arguing nobody “does more for adaptation and loss and damage” than the bloc.

“In the developed world, we are leaders on this, but we still need to do a lot more because we’re talking about trillions of adaptation money that will be necessary to prepare the planet for what is already happening, which is climate change.”

‘Natural gas can only be a temporary solution’

Back in Brussels, Timmermans is preparing for more extraordinary negotiations.

The European Parliament and the 27 member states are currently debating a massive legislative package – known as Fit For 55 – to enable the bloc to slash greenhouse gas emissions by at least 55% before the end of this decade. The effort will require profound changes in the European economy and over €520 billion in additional annual investments.

The Vice-President hopes most of the 13 draft laws included in Fit For 55 will be adopted before the next UN conference, COP27, scheduled to take place in Sharm El-Sheikh, Egypt, in late 2022.

“We still have a lot of work to do. Not every single proposal will be fully adopted by then, but I hope by then we will have reached the point of no return,” he said.

“Hopefully our plans can be an example for others like the Americans or the Japanese or the Chinese, or India. We need to take the world along,” he added. “The G20 is responsible for 80% of global emissions. We need to make sure they all do the right thing.”

Among the key decisions awaiting Timmermans and his fellow Commissioners is the completion of the EU taxonomy, a public rulebook that identifies sustainable projects and activities and serves as guidance for governments and private investors.

The executive has already classified as “green” many sectors like wind power, solar, geothermal and hydrogen but has delayed the labelling of natural gas and nuclear energy due to deep-seated disagreements between member states. France, with the help of Eastern countries, is leading the pro-nuclear team while Germany is recruiting like-minded partners to obstruct the campaign.

Recent media reports and public statements from EU officials suggest the two sources will be eventually categorised as sustainable to please both sides of the debate, a scenario vehemently opposed by environmental organisations, which argue the decision would amount to greenwashing.

“What we need to do is to help countries transit out of coal into renewables. But some countries can’t make that in one go. They will need natural gas as a transitional energy source,” Timmermans said when asked about the taxonomy dilemma.

“But we don’t want [EU countries] to be locked into natural gas. So it can only be a temporary solution. And we will make sure that our legislation is fit for purpose so that we have this transition from coal through natural gas to renewables in those countries that need it.”

On nuclear, the Vice-President noted the sector has the “huge” advantage of not releasing greenhouse gas emissions but warned against its price tag.