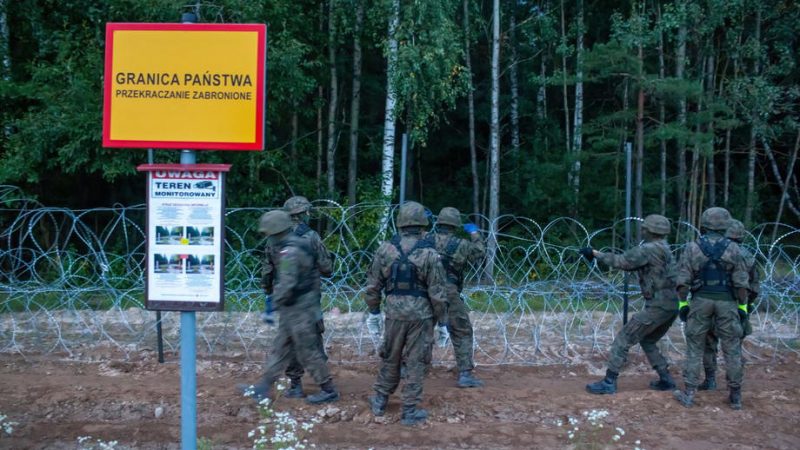 With EU leaders set to discuss migration and the situation at the EU’s eastern border with Belarus on Friday, Eastern Europeans are expected to ask for a review of the bloc’s legislation to reflect the ongoing crisis.

They will likely call for more financing for refugees settling outside the EU while condemning other countries, mainly Belarus, for intentionally sending migrants across the EU’s border.

“The EU remains determined to ensure effective control of its external borders”, according to the latest draft conclusions seen by EURACTIV.

It also “will not accept any attempt by third countries to instrumentalise migrants for political purposes” and continues that the bloc “condemns the recent hybrid attacks at the EU’s borders and will respond accordingly”.

Poland, Lithuania, and Latvia have reported sharp increases in migrants from countries like Afghanistan and Iraq trying to cross their frontiers from Belarus. Warsaw and Brussels say this is a form of hybrid warfare designed to pressure the EU over sanctions imposed on Minsk.

Lukashenko denies this and has blamed the West for what he says is a looming humanitarian catastrophe this winter after migrants were left stranded on the Belarusian-Polish border.

Poland has almost doubled its troop numbers at the country’s border with Belarus from 3,000 to nearly 6,000 in stepped up security measures in the face of the surge in migration.

“We see that Lukashenko is adapting to the situation,” Polish deputy foreign Marcin Przydacz told EURACTIV ahead of the summit.

“Once he has seen that humanitarian arguments are used, he kept sending even more people in an even worse condition – kids, mothers, etc. – over to warm up the divisions in Poland and across Europe,” he said.

Asked whether the EU should legalise pushbacks, Przydacz said Poland is “fully observing EU law” and has “the right and obligation as the sovereign country and member of the EU to protect the border.”

Over the past weeks, the European Commission has been evasive when asked about the legality of pushbacks of migrants in Poland and Lithuania, which is illegal under EU and international law.

“The Schengen code says clearly that one can cross the border only through the crossing points and those who want to apply for asylum or international protection, they know how to do it through the embassies, consulates or even by post in the country of origin,” Przydacz said.

“Those that cross the border and get the papers, don’t want to fill it out because they don’t want asylum in Poland but be sent to Germany, the Netherlands, Belgium or France – so we need to adapt to this situation,” he added.

At the same time, Lithuania is expected to present proposals to EU leaders to review the bloc’s legislation on migration policy to reflect the situation at the EU’s eastern border in recent months.

Earlier this month, twelve EU member states have called to update the bloc’s Schengen Border Code to allow ‘physical barriers’ as border protection measures and support them with EU funding, according to the letter sent to the European Commission and seen by EURACTIV.

The Schengen Border Code allows EU countries to establish shared border crossing points with their non-EU neighbours. Border guards of each country carry out exit and entry checks one after the other, per their national law.

Lithuania had previously suggested that the EU fund border barriers on its external frontier from its common budget, backed Poland and other Baltic countries.

On the sidelines of the EU summit, Lithuania, Latvia, Estonia, Finland, Sweden, Denmark, and Ireland were to hold a coordination meeting earlier on Thursday.

However, according to an EU diplomat, the latest conclusion draft does mention financial support, but not specifically funding for anything like an actual border wall.

EU leaders also look forward to the upcoming European Commission proposal to amend the Schengen Borders Code, which will show that the EU “remains determined to ensure effective control of its external borders”.

Asked whether he believes the currently imposed EU sanctions on Belarus work, Przydacz said he thinks so.

“They work, and the argument in favour of them working is that Lukashenko has no other instrument of reaction towards the EU than the revenge he’s taking on us with this artificial migration crisis and hybrid operation,” the Polish deputy foreign minister said.

“Sanctions are not a goal in themselves, though – we can change our approach once we see the change internally in Belarus,” he added.

German Chancellor Angela Merkel on Thursday had raised the possibility of additional “economic sanctions” against Belarus for its actions, which she dubbed “state-backed human trafficking.”