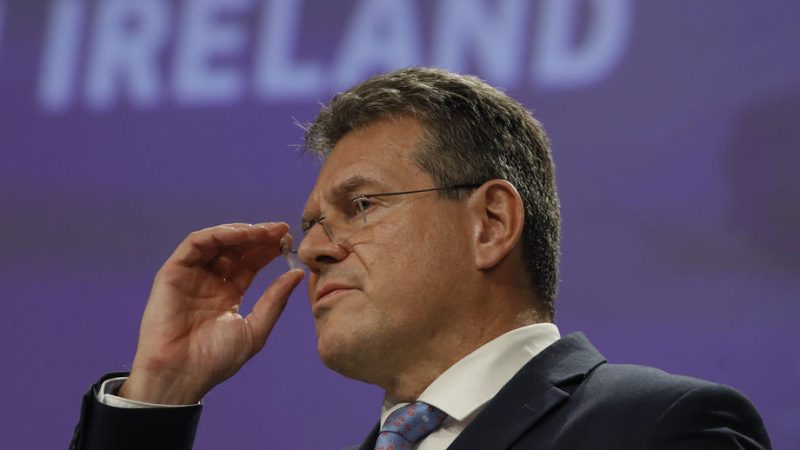 The UK and the European Union appear to be edging closer to a compromise on the Northern Ireland protocol after a week of softening rhetoric from both sides.

“We would prefer to reach a negotiated agreement if we can,” the UK’s Brexit minister David Frost told the UK House of Lords on Thursday (18 November).

“That is the best way forward for the stability and prosperity of Northern Ireland,” he added. The Protocol regulates border checks and the flow of goods betwen Northern Ireland and the rest of the UK.

Meanwhile, Frost’s public stance on the role of the European Court of Justice – a previous red line for London – also appears to have softened.

“The EU defines the Court of Justice as the final arbiter of what EU law means. We don’t challenge that and we can’t do anything about that,” said Frost. “It is the settlement of disputes that is the difficulty here.”

“We can solve the issues – market authorisation, SPS, customs, batch testing, regulatory functions, cancer drugs, veterinary medicine, you name it. Everything I’ve heard which is quite heavy lifting, we have an answer for it,” Sefcovic told the Dail on Tuesday.

EU officials have privately noted what they believe is a more conciliatory approach from the UK to resolving the dispute over the implementation of the protocol, which keeps Northern Ireland in the EU’s single market for goods but introduces customs checks for goods travelling from Britain across the Irish Sea.

In the meantime, trade statistics published on Wednesday appear to back Frost’s argument that the protocol has boosted trade on the island of Ireland but damaged trade between Britain and Northern Ireland.

The value of imports from Northern Ireland surged by 60% in the first nine months of 2021 to €2.8bn (£2.37bn), according to figures released on Wednesday by the Central Statistics Office (CSO) in Dublin.

Trade in the other direction has also increased with a 48% rise in exports to Northern Ireland from the republic, bringing the total value of trade to €2.57bn for January to September 2021

Business groups in Northern Ireland have been urging Frost not to suspend the protocol which, despite the bureaucratic problems that have been created by customs checks, gives them a competitive advantage by offering frictionless trade with the EU.

“Most Northern Irish exporters are pretty happy because they have dual market access (to the EU and GB) but importers are facing the pain from customs checks on both sides,” one local business leader told EURACTIV.

After meeting with politicians and business leaders, the Brexit minister told BBC Radio Ulster on Wednesday that trade links between Britain and Northern Ireland were being “worn away”.

“I think in aggregate, the trade links with Great Britain and Northern Ireland are about three times as big as those with Ireland and the single market. So in aggregate, those links in Great Britain are incredibly important. So it’s those [links] that are being sort of worn away by the way the protocol is working, and that’s why it’s so important to deal with them,” said Frost.

The UK has indicated that it is happy to police any goods from Britain that are destined for the Republic of Ireland but believes that goods staying in Northern Ireland should not be subject to customs checks.

However, Frost denied media reports that the UK government has now ruled out suspending the protocol, describing that option as safeguards that “remain very much on the table”.

“I would not recommend any outcome from these negotiations that I did not believe safeguarded the political, economic and social stability in Northern Ireland,” he added.