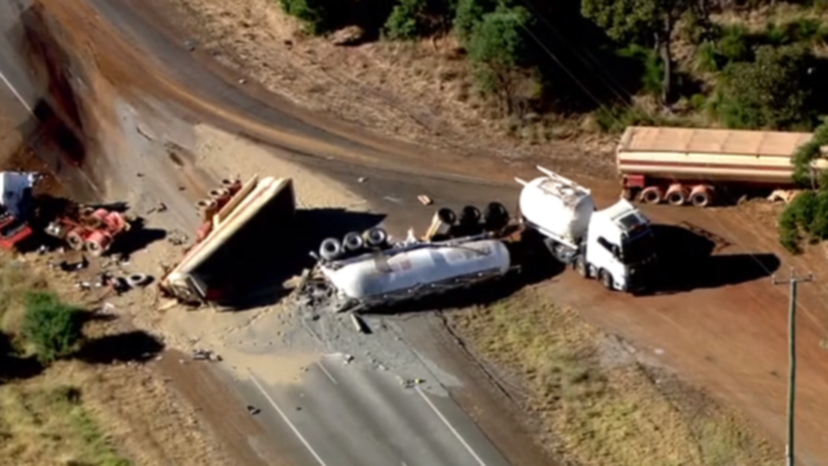 A man has died in a horror crash involving two trucks and a car north of Perth.

Emergency services rushed to the scene on Brand Highway in Bambun, 70km from Perth, after two road trains collided with a car around 5.35am on Thursday.

Police believe the two trucks were travelling north on Brand Highway when they crashed, before hitting the Holden Commodore heading southbound.

The 38-year-old driver of the Commodore died at the scene.

Inspector Vic Hussey said the incident was traumatic for all involved.

“The consequences of a crash like this involving two heavy vehicles is tragic and in this circumstance is exactly what we have, one person who has lost their life as a result of that,” he said.

“It is a very traumatic thing for obviously everybody involved, the family and relatives but also for the emergency responders that have attended there this morning and the scene is pretty horrific.”

Local Brian Duncan said he heard a “mega bang” and saw smoke in the air.

“It’s the worst accident I’ve seen in my lifetime,” he said.

Major Crash detectives are on site investigating the incident.

“It’s going to be a long and laborious process to investigate the crash and also it’s going to mean that the road is likely to be closed for most of the day,” Insp Hussey said.

“There’s some substantial damage to the road from the crash, plus the fact that this is grain and cement on the carriageway as well that will take some time to remove.”

Brand Highway remains closed in both directions between Honeycomb Road to Tonkin Highway, Muchea as clean up crews work to remove the wreckage and spilled cement, grain and sand.

Motorists are urged to use extreme caution and seek alternative routes, with the road expected to be shut for several hours.

Traffic management is in place and a detour is available.

Anyone with information about the crash or dash-cam or mobile phone vision is asked to contact Crime Stoppers on 1800 333 000 or report online.