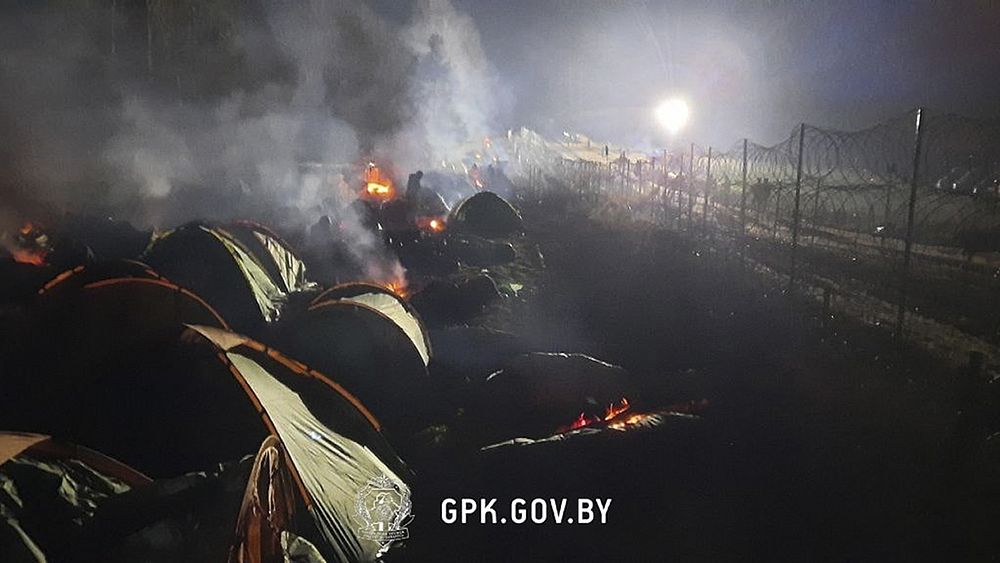 Poland said on Wednesday that dozens of migrants have been rounded up after managing to break through barbed-wire barriers to cross the border from Belarus and enter Polish territory.

“Over the last 24 hours, the police have detained more than 50 people near Bialowieza after they crossed the border illegally,” regional police spokesman Tomasz Krupa told AFP.

He added that two separate groups of migrants, some of whom managed to escape after being arrested, were involved.

Meanwhile, the international dimension to the crisis has continued to expand. German Chancellor Angela Merkel urged Vladimir Putin to intervene in a phone call with the Russian leader, complaining of “the instrumentalisation of migrants against the European Union”.

Belarus and Russia again hit back at such accusations, Minsk accusing the EU and the West of “provoking” the border standoff.

The Polish Defence Ministry has accused Belarusian forces of firing shots into the air in an area where migrants have set up a makeshift camp. The ministry posted a video on Twitter with the sound of what sounds like a gunshot.

It is impossible to verify the information independently. Poland has imposed a state of emergency that prevents reporters, activists and any other non-residents from entering a border zone.

In Lithuania, a state of emergency came into force at midnight, due to last for a month along its border with Belarus. At least 170 migrants were stopped from entering the country on Tuesday.

The measure restricts the movement of vehicles and imposes a ban on entry into a five-kilometre zone inland, residents excepted. Guards can carry out checks inside the area. It also bans gatherings in the zone and applies to migrants elsewhere too, including in the capital Vilnius.

The latest developments come amid the most tense period to date after months of heavy migration on Belarus’ borders with Poland, Lithuania, and to a lesser extent, Latvia. The three European Union countries are located on the 27-nation bloc’s eastern border.

The European Union has accused the regime of Belarusian leader Alexander Lukashenko of trying to create instability with a new wave of mass migration to the EU. Belarus has been accused of organising the transport of people from Middle Eastern countries, duping them into believing they can enter Europe.

Merkel calls on Putin to intervene

The German chancellor’s office said Merkel spoke with Putin by phone and “underlined the fact that the instrumentalisation of migrants against the European Union by the Belarusian regime is inhuman and completely unacceptable, and asked the Russian president to exert his influence on the regime in Minsk”.

Russia is a close ally of the government in Belarus. Germany is a favoured destination for migrants who arrive in the European Union.

The Kremlin’s account of the call said Putin “proposed to establish a discussion of the problems that have arisen in direct contacts of representatives of the EU member states with Minsk”, adding that Putin and Merkel “agreed to continue the conversation on the issue”.

Belarus continued its attempt to shift the blame onto Poland and the West on Wednesday, the day after Lukashenko accused Poland of conducting a “war” against the migrants.

Turning the accusations against Minsk on their head, Foreign Minister Vladimir Makeï said the migration crisis had been “provoked by the EU and its member states bordering Belarus”, and was being used as an “excuse” for imposing a “fifth round of sanctions”.

Speaking from Moscow as he met his Russian counterpart Sergei Lavrov, Makeï added that the two countries were working for a united response in the face of “unfriendly acts” targetting Belarus.

Lavrov concurred, stating that they had reinforced their collaboration “to counter a campaign against Belarus triggered by Washington and its European allies within international organisations”.

The Kremlin has rejected accusations from Poland’s prime minister, who claimed on Tuesday that President Putin was orchestrating the influx of migrants as the “sponsor” of Lukashenko’s actions.

Moscow’s role in the influx of migrants has come under heightened scrutiny this week. The EU said on Tuesday that Russia is among 20 countries suspected of involvement in transporting people towards Belarus.

EU leaders allege Belarus is retaliating for sanctions the bloc imposed on the authoritarian government in Minsk, over its brutal crackdown on domestic dissent.

Thousands of people were jailed and beaten following months of protests in the wake of last year’s presidential election that Lukashenko is widely believed to have rigged to win a sixth term.