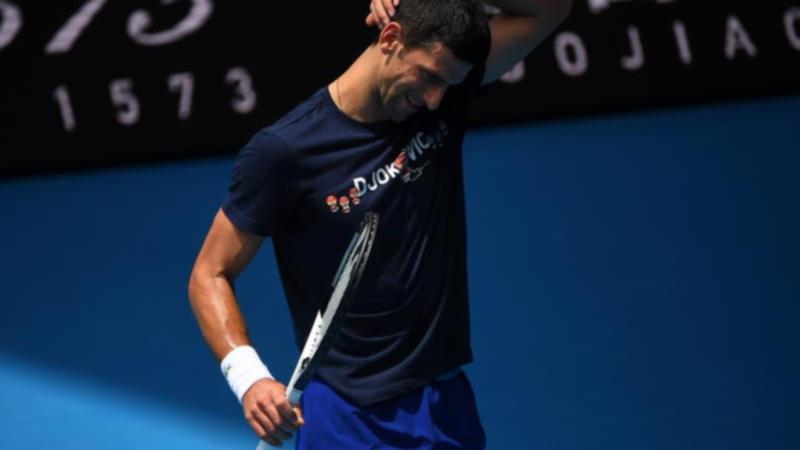 One week after Novak Djokovic landed in Australia, only to be detained by border officials, uncertainty remains about whether the tennis star will still be allowed to stay in the country.

Immigration Minister Alex Hawke has again delayed a decision on whether to use discretionary powers to cancel the world No.1’s visa, as he considers evidence provided by Djokovic’s lawyers on the matter.

It comes after Australian Border Force officials cancelled Djokovic’s visa last week for entering the country while unvaccinated, only for the cancellation to be later quashed by a federal court.

“Mr Djokovic’s lawyers have recently provided lengthy further submissions and supporting documentation said to be relevant to the possible cancellation of Mr Djokovic’s visa,” a spokesman for Mr Hawke said.

“Naturally, this will affect the timeframe for a decision.”

Officials are looking into potential discrepancies on Djokovic’s declaration form, which stated the tennis star did not travel out of the country in the two weeks before his flight to Australia.

Djokovic was filmed playing tennis in Serbia on Christmas Day and was later seen training in Spain on December 31, both in the two-week window.

However, Djokovic has denied he was trying to mislead the government on the form, stating an agent had made an “administrative mistake” while filling out the form.

In a statement posted to social media, the Serbian player also admitted to attending a media interview in Belgrade when he knew he had COVID.

After carrying out a PCR test on December 16, Djokovic attended the interview two days later.

“I felt obliged to go ahead and conduct the interview as I didn’t want to let the journalist down, but did ensure I socially distanced and wore a mask except when my photograph was being taken,” Djokovic wrote.

“While I went home after the interview to isolate for the required period, upon reflection, this was an error of judgement and I accept that I should have rescheduled this commitment.”

The controversy surrounding the decision over whether Djokovic could still be deported comes just four days before the start of the Australian Open.

Since he was freed from immigration detention on Monday, Djokovic has been training at Melbourne Park.

Djokovic is looking to win a record 21st Grand Slam title when the Australian Open begins on Monday.