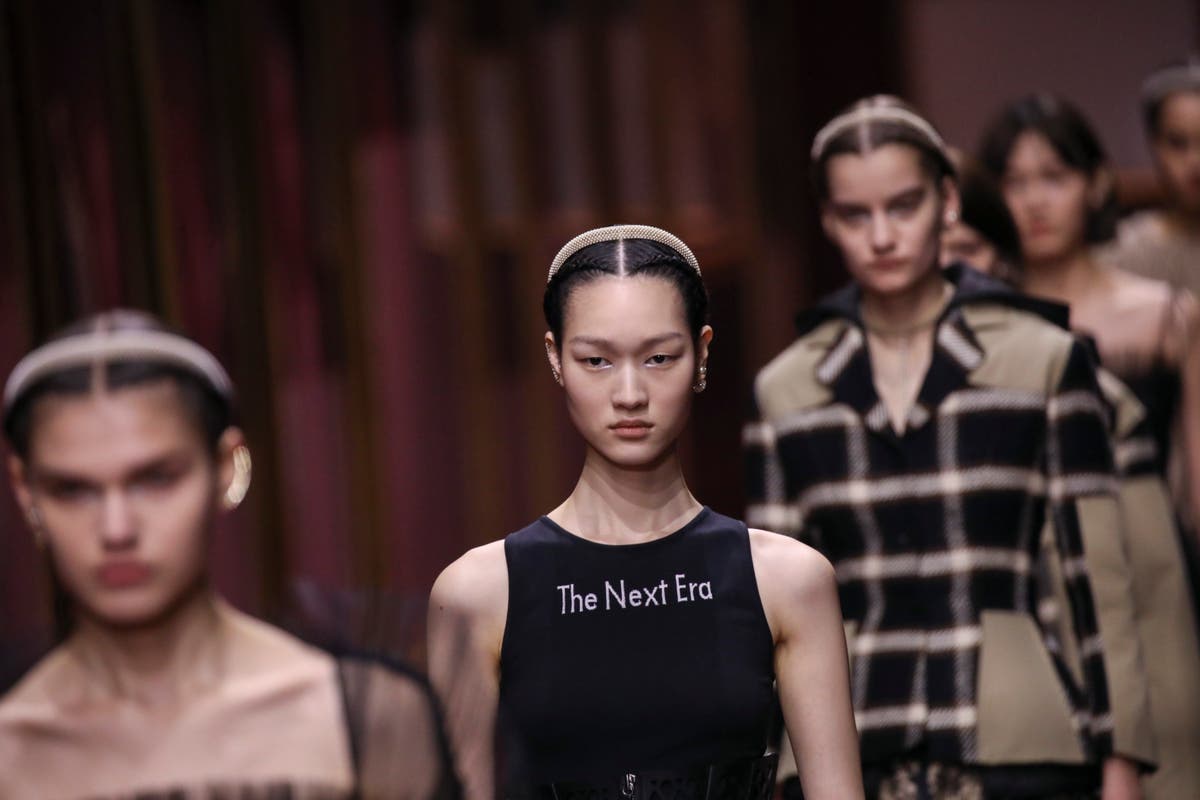 Dior’s affirmed feminist designer Maria Grazia Chiuri used the male gaze, as reflected in female oil portraits across the centuries, to make a fashion statement on female empowerment and subjugation. But Tuesday’s feisty ready-to-wear display in Paris, set in the splendid Tuileries Gardens, was also just a beautifully conceived collection — one of the Italian designer’s finest — which served to start Paris Fashion Week on strong creative footing.

As editors entered filing past myriad masterpieces, many expressed relief that the French government has ruled the face mask to no longer be obligatory at fashion shows.

Yet despite the glamor and optimistic moments, the conflict in Ukraine was still not far from fashion insiders’ minds and the Paris Fashion Federation offered a rare statement in support of freedom.

Here are some highlights of fall-winter ready-to-wear shows.

An installation of Leonardo da Vinci’s masterpiece “Lady with an Ermine” hanging in the entrance led fashion insiders, including popstar Rihanna, model Elle Macpherson and tennis ace Maria Sharapova, inside the venue to discover wall-to-wall paintings. Though the art at first seemed more at home at the nearby Louvre Museum, on closer inspection the female subjects sported contemporary jarring double eyes and seemed to symbolized a sort of new female vision. This, the work of Italian contemporary artist Mariella Bettineschi, was Chiuri’s starting block — one she used with flair to explore and deconstruct historic female fashions. Corsetry, the 1940s bar jacket (the house signature), as well as sheer layering reimagined the codes of yesteryear. But this time for Dior they were all about protection or armor against the world.

Head hung down combatively, the first model sported a fierce, minimalist black body suit with white lines — both like a skeleton and a cutting pattern. Bright multicolor leather gloves evoked the form of 18th century styles to the elbow, imagined in contrasting biker styles with padding at the knuckles.

A silver bar jacket had dark sporty ribs. Corset-like tops had fastenings made of plastic toggles, in one of a multitude of fashion forward touches. A black perforated corset was stiff and impenetrable.

There were many perfectly executed moments, some of which even evoked a Japanese warrior.

Chiuri was trying to say: Women have been subjugated for so long, so now we’re going to use those same clothes to empower ourselves.

It’s the elephant in the room at Paris Fashion Week. As bombs fall in Europe, what is the justification for exclusive fashion collections with perfume wafting in the air? There is none. However, Paris’s fashion body has tried to address this thorny point with a statement sent to AP of solidarity with Ukraine.

He suggested that the show continue as creation itself is “based on principles of freedom, under any circumstances. And fashion has always contributed to individual and collective emancipation and expression across our societies.”

The federation issued a caveat — that you “experience the shows of the coming days with solemnity, and in reflection of these dark hours.”

STARS TURN OUT FOR OFF-WHITE

The death of respected U.S. designer Virgil Abloh last year still casts a shadow over the Paris fashion industry. Since his passing in November there have been two fashion tributes to him at Louis Vuitton, where he was menswear designer — the first in Miami, and the second during the Paris men’s collections. On Monday evening, his personal brand Off-White showed its fall-winter show yet it seemed to be more of a celebration of him that anything else.

The posthumous show designed by him was entitled “Spaceship Earth” — and in tune with the interstellar theme the stars turned out in constellations: A$AP Rocky, Rihanna, Idris Elba and Pharrell Williams to name but a few.

The signature hoodies, urban cargo pants, utilitarian toggles, fluorescent colors and statement branding were here in droves, often in black and set against the decor of a giant chandelier.

But there were also bittersweet moments that seemed to reference the designer’s private battle with a rare form of cancer.

Handbags came out featuring the print “more life” and one replete with red and white pill capsules.

Could there be a more eccentric way to begin women’s ready-to-wear than a topless male model slinging a bright blue faux fur chair on his back? Probably not.

That was thanks to former Nina Ricci designers Rushemy Botter and Lisi Herrebrugh, the lauded menswear design duo, who are a breath of fresh air.

The designers, who grew up in the Caribbean, like to celebrate all things people jettison.

Recycled plastics found in the ocean were thus imagined here as fringing on a dress resembling an apron or as decoration on a polo shirt motif. Vivid hues that evoked the sea beds and headwear that resembled medusas continued the theme.

Upcycling was also, as ever, a big theme with strips of fabric used to fashion a rugby shirt.