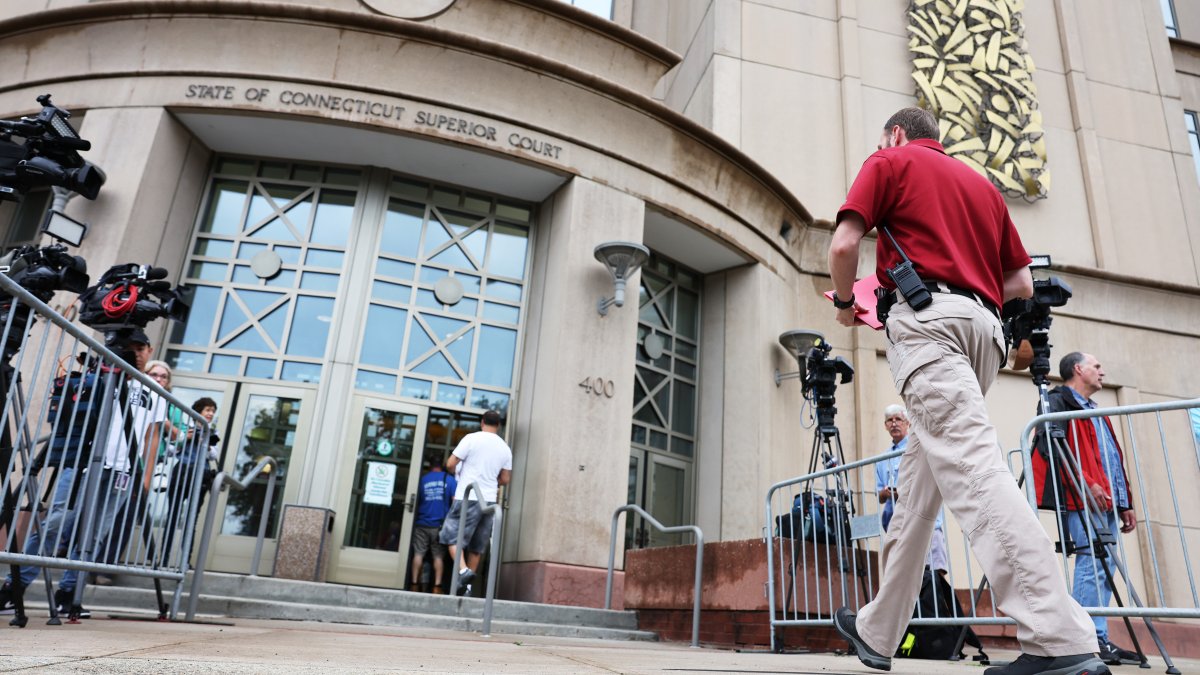 After bashing the proceedings on his web show, conspiracy theorist Alex Jones made his first appearance Tuesday at a trial in Connecticut that will determine how much in damages he should pay for telling his audience of millions the Sandy Hook Elementary School shooting was a hoax.

Jones arrived at the courthouse at about 9:30 a.m., though it is unclear when he might be called to the stand.

During the first four days of the trial last week and over the weekend, Jones criticized the proceedings from his Infowars studio in Austin, Texas, calling it a “show trial” and “rigged court” aimed at silencing him and putting him out of business while ignoring free speech rights. Articles on his Infowars website labeled it a “kangaroo court,” and mocked the judge and Sandy Hook families’ lawyer.

Jones has already been found liable for damages to the lawsuit’s plaintiffs — an FBI agent who responded to the 2012 shooting and relatives of eight children and adults who were killed at the Newtown, Connecticut, school. Judge Barbara Bellis found him and Infowars’ parent company, Free Speech Systems, liable by default without a trial, as punishment for what she called his repeated failures to turn over documents to the Sandy Hook lawyers.

And Jones is not being allowed to present defenses arguing he is not liable, including that the First Amendment gave him the right to say the shooting didn’t happen and raise questions about it.

The plaintiffs say Jones’ promotion of the hoax lie on his show led to the families being threatened and harassed by deniers of the shooting. They say they’ve endured death threats and in-person harassment, video recording by strangers and abusive comments on social media. Some families moved out of Newtown to avoid the harassment.

And they say while Jones talked about the shooting, sales of the dietary supplements, clothing, food and other items he hawks on his show surged. A representative for Free Speech Systems testified last week that she believed Jones and his company made at least $100 million in revenues since the school shooting.

At a similar trial over Jones’ hoax lies in Texas last month, a jury awarded nearly $50 million in damages to the parents of one of the children killed in the shooting. Like the Connecticut case, the Texas judge found Jones and Free Speech Systems liable by default as a penalty for not turning over all documents requested by the plaintiffs.

The Texas trial showed some differences between what Jones says on his show about the legal cases against him, versus what he says on the stand.

Jones, who has said over the past few years that he believes the shooting did happen, also bashed the Texas trial on his show. Under oath and facing a jury in Austin, he said he realized the hoax lies were irresponsible and hurt people’s feelings, and he was sorry for that.

Jones has painted the trials as a conspiracy by Democrats and the media to put him out of business and silence him. He also has complained he was found “guilty” without trials. There is no guilt in civil trials like the ones in Connecticut and Texas, and his being found liable for damages without trials were sanctions against him for refusing to obey court orders and rules to turn over evidence to the plaintiffs.