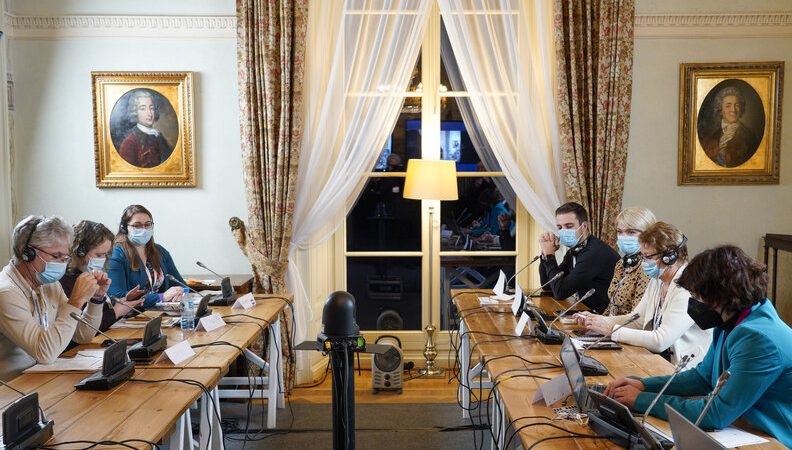 The Conference on the Future of Europe (CoFoE), involving citizens in EU policy-making, is in the middle of its journey. It is already possible to assess the successes and limits of such deliberative democracy experiments and to question whether it can be a replicable exercise for the future.

The CoFoE sees citizens across Europe work to elaborate recommendations for EU lawmakers.

There are different levels of participation: the first one is articulated around citizens panels, where randomly selected 800 citizens are elaborating recommendations thanks to in-person and online meetings.

Why is deliberative democracy innovative?

As reported by EURACTIV, deliberative democracy can be more innovative and accountable than elections.

Last July, at an event organised by the Friedrich Ebert Stiftung Foundation on how to empower citizens through the CoFoE, professor Wolfgang Merkel explained why democracy is currently experiencing a deep crisis.

According to him, “there is a declining of trust in representative institutions” and at the same time, national parliaments have had less power than executives since the 1990s. Despite this, people participate in elections against the backdrop of a political landscape that articulates the debate around different shapes of polarisations.

Merkel warned that the more the political landscape is polarised, the more people participate, but this polarisation is damaging democracy.

Debates around main topics of the current political landscape are articulated based on who is in favour or against. For instance, regarding vaccines, the media and politics are divided into pro and anti-vaxxers and the concerns of both camps can be heard.

Also, for the media environment, the more a debate is polarised (and violent), the more it is likely to be televised.

Other examples of the past can be related, for instance, to pro/anti-European sentiments.

The 2016 Brexit referendum was one of the most polarised debates Europe experienced in the 2010s, together with the 2015 Greek referendum on the Euro. Both events had significant media coverage, but neither contributed to making society more democratic and progressive.

According to the 14 December 2021 OECD report on “eight ways to institutionalise deliberative democracy”, the representative deliberative process is “a process in which a broadly representative body of people weighs evidence, deliberates to find common ground, and develops detailed recommendations on policy issues for public authorities”. Unlike at elections and polls, citizens are called to discuss, instead of merely voting.

“I discovered deliberative democracy is a more productive method to “depolarise” controversial issues,” the democracy expert Jonathan Moscovic told EURACTIV in an interview.

“Deliberative democracy is a way of going back to the core principles of democracy, where free and equal citizens (and their representatives) make mutually acceptable and accessible decisions. Political parties fight and theatrically confront each other without finding a solution; citizens can do much better.”

In the context of the Conference, citizens’ panels are elaborating recommendations in a three-stage process. They met for the first time at the European Parliament in Strasbourg last autumn. Then they met for an online session in November while in the third stage, panels are finalising their recommendations.

At the end of January, 40 representatives of panels 2 and 3 will discuss their recommendations with the Conference’s plenary at the European Parliament in Strasbourg.

Because of COVID, panels 1 and 4 postponed their in-person meetings to approve their recommendations, but these two panels will also discuss their proposals with the Conference’s plenary in Strasbourg.

Input from both the platform and national panels will also be discussed by the Conference’s plenary and proposals will be put forward to the executive board, which will draw up a report with the plenary.

The outcome of the Conference will then be presented in a report to the Joint Presidency. The three institutions will then examine how to respond, each within their own sphere of competences and in accordance with the Treaties.

EURACTIV has interviewed several citizens’ panels and has observed a general enthusiasm for participation.

Several citizens also said the Conference should be an exercise that is replicated. Likewise, experts and academics are debating the possibility of making the Conference a permanent exercise.

“For the first time, it’s not the institution talking to us but they are the ones discussing with us,” Piero, 64, from Italy, one of the participants of the citizen panel dedicated to climate change, environment and health, explained to EURACTIV Italy.

Another positive aspect of the Conference is that people who speak 24 different languages can debate and be connected; in all meetings, there is a simultaneous translation and the entire content of the online platform is translated into all 24 EU languages.

Learning from mistakes: a better design for the follow-up

Though the Conference is still a work in progress, some aspects can be constructively criticised.

Since the start of the Conference, EU institutions have shown readiness to properly follow up on citizens’ recommendations.

At an event organised by the Friedrich Ebert Stiftung Foundation last July on how to empower citizens through the CoFoE, Ivo Belet, a member of cabinet for European Commission Vice President Dubravka Šuica, said the Commission “will commit to following up citizens’ recommendations”.

Nevertheless, institutions did not pay enough attention to the design of the Conference, particularly to the follow-up process. For instance, it is still not clear whether recommendations of citizens ‘panels will be discussed by the Conference’s plenary, together with the input from the platform and national panels, or separately.

In the beginning, it was said that recommendations would be voted by the Conference’s plenary together with panels’ ambassadors, but EU institutions have now declared that there will be only a discussion without a vote on such occasions.

The secretariat has not provided details about how recommendations will be treated in each report, and how much will remain from the original recommendations.

More importantly, there is no evidence of a follow-up meeting with citizens’ panels on which recommendations will be adopted, how they will be implemented, and why others will be rejected. Usually, in deliberative democracy exercises, this is the first thing that should be designed.

Finally, the CoFoE’s website states that “three institutions will examine how to follow up effectively to this report, each within their own sphere of competences and in accordance with the Treaties”.

This is a significant constraint on the work of the citizens’ panels as it is not clear whether citizens proposals will even be considered if they go beyond or regard member states’ competences.