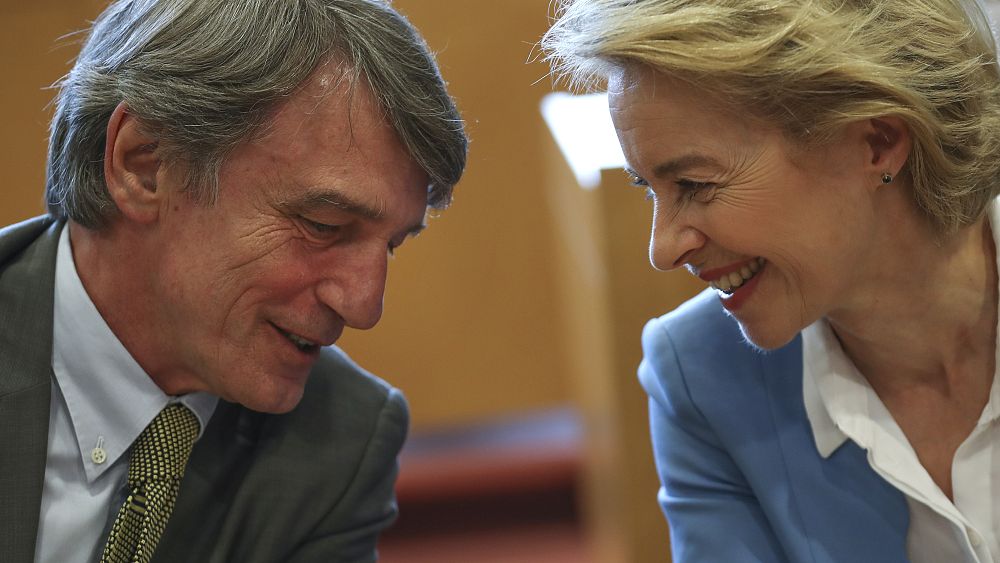 Europe is mourning the loss of David Sassoli, the European Parliament President and Italian social democrat, who died overnight due to a dysfunction of the immune system.

The first reactions to his passing came from the leaders of the other European Union institutions, who had worked closely with Sassoli to move forward the bloc’s political agenda. The flags in the main EU buildings were lowered at half-mast.

“Today is a sad day for Europe. Our Union loses a passionate European, a sincere democrat and a good man,” said Ursula von der Leyen, President of the European Commission, in a video statement, part of which she also read in Italian.

“David Sassoli was a man of deep faith and strong convictions. Everyone loved his smile and his kindness, yet he knew how to fight for what he believed in.”

As head of the executive arm, von der Leyen was in constant touch with Sassoli to move forward legislative proposals her team drafted through the hemicycle the Italian presided over.

“He wanted Europe to be more united, closer to its people, more faithful to our values. That is his legacy,” she remarked with solemnity. “And that is how I will remember him. As a champion of justice and solidarity, and a dear friend.”

Frans Timmermans, the Commission’s vice-president and fellow socialist, said he was “at loss for words” by the tragic news and celebrated his kindness as “an inspiration to all who knew him.”

For his part, Paolo Gentiloni, the Italian Commissioner in charge of the economy, said he would always remember Sassoli’s “leadership, his passion, his generous friendship.”

Charles Michel, President of the European Council, used the Italian language to praise his colleague as “an honest and passionate European.”

“We already miss his human warmth, his generosity, his cordiality and his smile,” Michel wrote.

In Frankfurt, Christine Lagarde, President of the European Central Bank, described Sassoli as “a committed European, who put people at the heart of everything he did during his life.”

‘We will miss you so much’

More heartfelt messages came from the lawmakers of the European Parliament, some of whom had known Sassoli since he entered the hemicycle in 2009.

“Thank you for the path we were lucky to share. For your friendship and your work. Your commitment to a better Europe was always inspiring,” said Iratxe García Pérez, the leader of the Socialists and Democrats Group (S&D), the party to which the Italian belonged.

“We will miss you so much.”

Manfred Weber, chairman of the European People’s Party (EPP), the largest formation in the parliament, said his political family was “extremely sad and shocked” by the news.

“He was a true European and passionate ambassador of a more united and social Europe,” Weber wrote.

An election to replace Sassoli, whose term was supposed to expire after 2.5 years, was already scheduled for next week’s plenary session. The Italian had previously ruled out running for re-election.

Roberta Metsola, the Maltese MEP who, until this morning, was the Parliament’s vice-president, said she was “heartbroken”. Metsola will now assume the President’s office until the ballot takes place, a vote in which she was already considered the favourite to win.

“Europe has lost a leader, I have a lost a friend, democracy has lost a champion. [Sassoli] dedicated his life to making the world a better, fairer place,” she wrote on Twitter.

Leaders from the other political parties, including the liberals from Renew Europe, the Greens, the European Conservatives and Reformists (ECR) and The Left, all shared personal messages honouring Sassoli’s work and legacy.

Stephane Sejourne, the Renew Europe president, described the Italian as a “man of conviction” while Greens co-chair Philippe Lamberts exalted his “kindness and concern for the common good.”

Sassoli’s immediate predecessor in the post, fellow Italian MEP Antonio Tajani, said he was “appalled and deeply dismayed” by his colleague’s death.

‘We will continue your mission, David!’

Across Europe, heads of government and state expressed their shock and sadness while commending the character and political leadership of David Sassoli.

“We will continue your mission, David!”

From Rome, Italian President Sergio Mattarella shared a long message lamenting the “unexpected and premature” death of the parliamentarian, which, in his view, “leaves an empty space in the ranks of those who believed and built a peaceful Europe” and is a cause of “profound pain” for his native country and continent.

“A passionate politician, a loyal, rigorous leader, who, thanks to his culture, knew how to cultivate a political initiative at the service of the people and the institutions,” Mattarella wrote.

Dutch Prime Minister Mark Rutte hailed the Italian as “hard-working” and “above all, a kind and gentle man” while his Estonian counterpart, Kaja Kallas, said she was “devastated” by the loss of “a true advocate for the European unity, values, and cohesion.”

A similar sentiment was echoed by Greek PM Kyriakos Mitsotakis: “His vision of Europe as a beacon of peace and democracy in the world will shine on as a lasting legacy.”

Sassoli is the first European Parliament President to die in office since Alcide De Gasperi, the Italian statesman who passed in 1954 while leading the then-called Common Assembly.